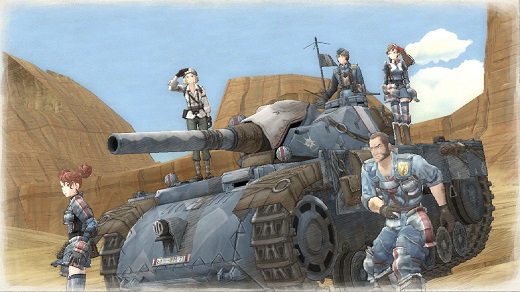 WTF Love can bloom on the battlefield, but can war be adorable? Spoiler: Yes, it can.

Back in 2008, Sony was at a low point in the console war. The PlayStation 3 was more expensive, less popular, and more difficult to develop for than the Xbox 360, and it had few notable exclusives to its name. It was into this climate of despair that Valkyria Chronicles entered as a surprise hit.

Though virtually guaranteed to avoid mainstream success thanks to being a turn-based tactical game, its gorgeous art style, anime bent, and intriguing setting earned it a place in many hearts and minds. To this day the game is fondly remembered as a ray of sunshine in a dark period, though one wonders if the nostalgia for Valkyria Chronicles owes more to the circumstances of its arrival than the quality of its design?

On the verge of celebrating its eighth anniversary, Valkyria Chronicles Remastered‘s PS4 launch affords us an opportunity to answer that question in earnest, and the comforting truth is that it has held up incredibly well.

The painterly graphics of Valkyria Chronicles‘s CANVAS engine look as good now as they did then, and perhaps even better thanks to the advent of anti-aliasing tech and faster framerates. The same goes for the narrative, though what’s best described as “Anime World War II: The Quasi-Belgian Front” might seem overly earnest to an audience exposed to the last eight years of subversive, cynical tones in pop fiction. Still, there are genuine emotions when following the plucky soldiers of Gallian Militia Squad 7 as they fend off an invading Imperial army, and the characters, while conforming to stock archetypes, are endearing and likable throughout.

The gameplay still feels fresh, and has largely gone uncopied. The BLiTZ system (Battle of Live Tactical Zones) constructs a curious hybrid of turn-based and real-time play. Players and enemies take turns moving around large, terrain-filled maps, spending Command Points to “activate” their units. Once activated, units are controlled directly, moving and shooting in real-time until their action bar is exhausted.

In spite of its turn-based core, fast thinking and smart moving still play a key role since characters can be fired upon by the enemies they pass by (and vice-versa), encouraging leap-frogging “overwatch” strategies as well as bold, risky rushes into the teeth of hostile fire.

If there’s a wrinkle that tends to undermine the combat, it’s that mission scoring is centered almost solely on minimizing the amount of turns it takes to complete a battle. This emphasis on speed tends to favor specific tactics, as well as abusing certain aspects of the system in ways that seem at odds with more realistic and thematically-appropriate tactical philosophies. It would have been gratifying to see Sega tweak the game balance a bit for this remaster, but perhaps it was too much to hope for.

Completists will be glad to see that this remaster contains all the DLC published since the original, which includes an extra-hard difficulty level, a set of challenge missions, two short story campaigns that expand on popular characters, and a subplot featuring playable Imperial characters and troops.

The quality of the port and of the game itself make Valkyria Chronicles Remastered a must-play title for strategy fans who haven’t cracked it yet. The proposition of a purchase might be a bit more fraught for vets who don’t feel the need to revisit since there’s no genuinely new content here, but there’s no question that it’s good to see this classic made available to new fans on a new console. Rating: 9 out of 10

Disclosures: This game was obtained via publisher and reviewed on the PS4. Approximately 20 hours of play were devoted to the single-player mode, and the game was completed.

Parents: According to the ESRB, this game contains mild blood, mild suggestive themes, use of tobacco, and violence. Some scenes contain characters being shot and killed, and some characters that may be considered underage are depicted discussing or wearing “racy” swimsuits.

Remappable Controls: The game does not have remappable controls.

Valkyria Chronicles finally gets trophies! I never finished it on PS3 because of those awful timed missions. Looks like I’ll be trying again.