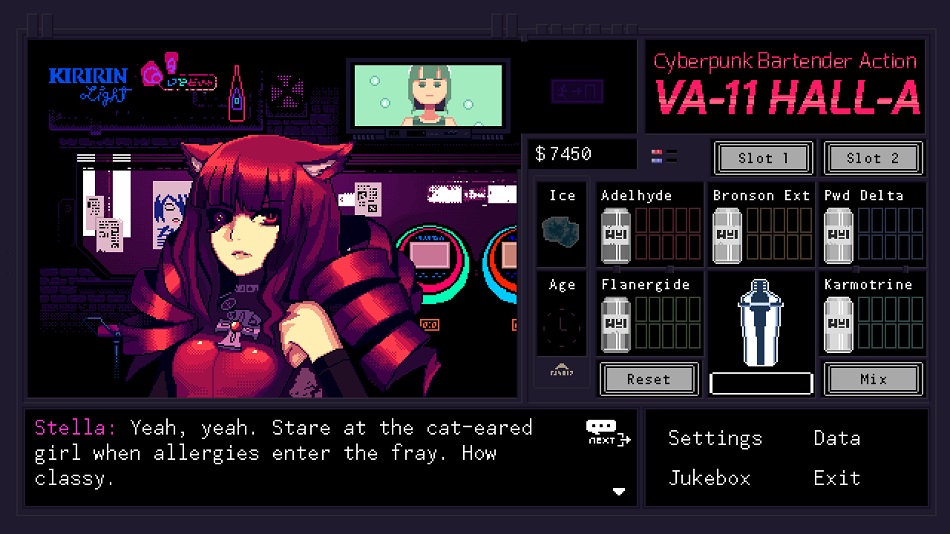 LOW …that sometimes gets in the way of playing the game.

WTF “Is there a chance I *won’t* be serving talking dogs this weekend?”

It’s not a controversial statement to say that most games trade on the traditional ‘power fantasy’ model. More often than not, players are cast as extraordinary individuals, upending the status quo in a glorious (and sometimes inglorious) spectacle of might and violence. Even a game that revels in disempowerment like the lauded “immigration officer sim” Papers, Please, eventually bends towards the principle of granting agency as the player is, in some story paths, offered the chance to play a key role in launching a violent revolution.

However, power fantasy is not the order of the day for Venezuela-based Sukeban Games’ debut visual novel, VA-11 Hall-A. Jill, the player character, lives in a depressing near-future dystopia where Big Data has gotten so big that surveillance-conducting nanomachine injections are required by law, and unprofitable dissent is violently suppressed by power-armored thugs. Does she do anything about it? Not really. She just tends bar at a little pub with a difficult-to-pronounce name (they just called it “Valhalla”, and for the rest of this review, so will I). It’s hard enough just to make rent, y’know?

VALHALLA‘s world is something that happens to the characters that live in it, and Jill in a prime position to experience it. Each day, players will begin by scrolling through some cute in-fiction webpages and see how they’ll be able to pay off their bills at the end of the month. Then they’ll go to work, where the bulk of gameplay happens.

In keeping with the classic cliche of a bar serving as a sort of secular confessional, Jill’s main job is to interact with a diverse range of cyberpunk patrons, serving them the drinks they ask for (or screwing up their orders, which is another way to get to one of the game’s multiple endings).

The patrons range from a harried secretary who happens to be a sentient android, to a veterinarian working at a corporation run by talking Welsh Corgis (who’ve just booked the whole bar for a company party), to an A.I. construct on the run from sinister accountants, to a character I suspect was tossed in as a reverent homage to Hideo Kojima’s cyber-noir classic Snatcher. These characters and their small, sometimes open-ended stories, are the heart and soul of VALHALLA, and seeing them play out ends up more interesting than any conventionally “epic” main plot could hope to be. 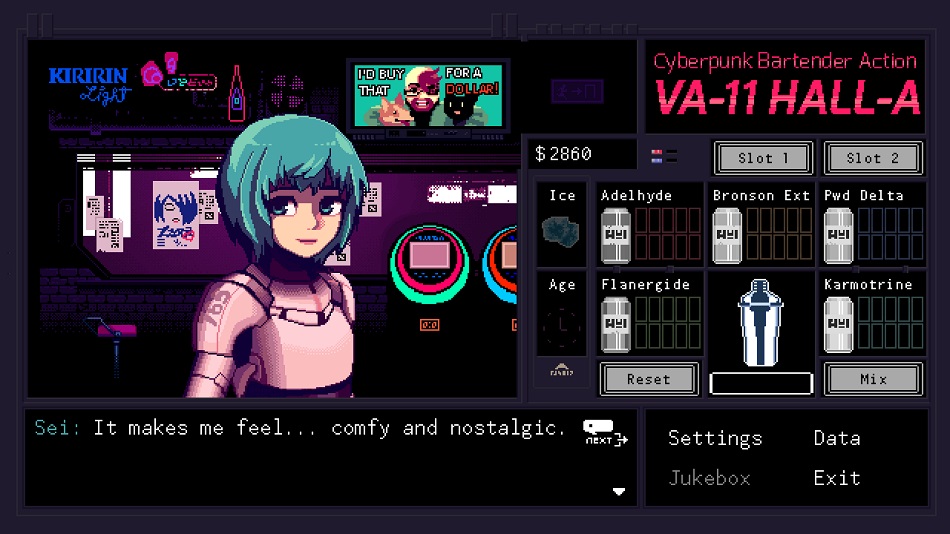 Unfortunately, less interesting than the stories is the gameplay. I’m of the opinion that there’s a lot of fertile ground in the small-but-growing segment of titles that attempt to simulate daily work in an entertaining way. For better or worse, though, VALHALLA is more focused on being a visual novel than a deep dive on the essentials of mixology.

Customers will order drinks, and players will mix them by tapping colored icons corresponding to fictional chemicals like “Karmotrine” and “Bronson Extract”. Recipes for the different cocktails are helpfully stored in an in-game manual, and there’s no penalty for taking too long or inputting the wrong chemical (though some patrons may be incensed if one adds alcohol to their order on the days that they’re a designated driver).

Things can get more difficult as barflies make vague or unsure requests, asking for “sweet” or “classy” drinks, forcing players to do some interpretation when looking up potential candidates in the menu. However, for the most part, the only way to fail at VALHALLA‘s bartending is to deliberately try to do so. (And yes, there is a reason to, since some story paths open up if Jill turns out to be particularly bad at her job.)

All of this happens in good style. VALHALLA‘s limited color palette, neon aesthetic, and classical anime character designs call to mind a specific era of late-’80s and early-’90s gaming, a time when the medium’s best fiction was dressed up in sci-fi and played on obscure Japanese computers. Even the UI design evokes the PC Engine worthies, though this has the slightly inconvenient side effect of making the text hard to read in long stretches — unfortunate for a visual novel.

Ported by Wolfire Games, VALHALLA fits well on the PS Vita, though the controls can be somewhat confusing at first due to some functions being controllable with both the button-and-stick inputs, but others only by the touch screen. More concerning is the fact that earlier iterations of the game, included here as “DLC” chapters and containing unique stories that inform key points in the main title, are inadequately labeled and confusing to access. To ensure that potential players reading this review don’t get led astray like I was, my advice is to play the “Prologue” and “Anna” segments before starting on VALHALLA proper. These are accessed by a small menu in the upper left corner on the main title screen.

VA-11 HALL-A is a game best enjoyed in short bursts, when a player wants to relax with a title that makes few demands and offers pleasant company. Though it lacks the dramatic heft to propel it into the upper tiers of videogame storytelling, it doesn’t really aspire for such lofty goals and avoids the pretension that such titles occasionally evince. Much like a comfy bar in real life, it’s a good place to visit, but no one needs to stay for long. Rating: 7.5 out of 10

Disclosures: This game is developed and published by Sukeban Games and Wolfire Games. It is currently available on PS Vita and PC. This copy of the game was obtained via publisher and reviewed on the PS Vita. Approximately 10 hours of play were devoted to the single-player mode, and the game was completed. There are no multiplayer modes.

Parents: According to the ESRB, this game is rated M and contains Sexual Themes, Strong Language, Use of Alcohol and Tobacco. The player character is a bartender serving alcohol to a number of patrons. Characters routinely swear and speak in detail about their sex lives, though there is no graphical depiction or nudity.

Deaf & Hard of Hearing Gamers: There is no voice acting in the game, and all dialogue is rendered in text. No audio cues are required for play.

Remappable Controls: The game has no remappable controls. Some functions may be controlled by both the touch screen and standard button controls.