The Threat In Our Stars. 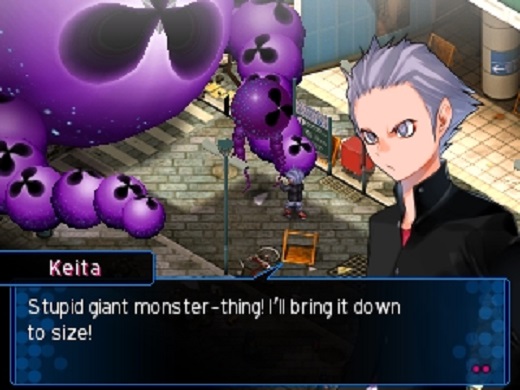 HIGH Assembling the right power builds for my team and demons.

LOW Not knowing whether I gained any favor from dialog scenes.

Stylish teens. Urban cityscapes. Terrifying demons. These are the bread and butter elements of Atlus's venerable Shin Megami Tensei franchise. All of the above are present in Devil Survivor 2: Record Breaker, along with a dash of Lovecraftian cosmic indifference.

Record Breaker is an enhanced 3DS remake of the original Devil Survivor 2 on DS, released in 2012. The enhancements included in this port make it the definitive version of the game, though coming so many years after the original, perhaps the most pertinent question is whether those perks are enough to justify a purchase.

Put plainly? They do.

The Devil Survivor titles are among the most interesting of Atlus's many Shin Megami Tensei spinoff lines, sharing the pedestal with the better-known Persona role-playing games. Combining strategic combat in the vein of Final Fantasy Tactics with the franchise's characteristic emphasis on creatures of myth and their interactions with hip Japanese high-schoolers, Devil Survivor cuts a contemporary, modern niche in a genre typically dominated by sword-and-sorcery fare.

Narratively, Record Breaker is essentially identical to the original Devil Survivor 2. The main campaign places a handful of city youths, led by a player-named protagonist, in the middle of a disaster befalling Tokyo. A mysterious app, Niceaea, lands on their cellphones, granting them the ability to summon and control demons, and thus the ability to shape their own fates in the face of mysterious invaders named after constellations. 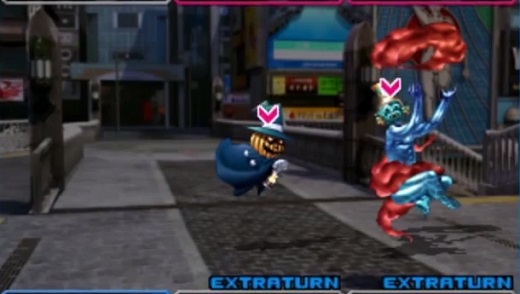 Unfortunately, even with a winding plot that encompasses secret organizations, grassroots rebellion, and strange conspiracies in addition to an invasion from the spaces beyond, Devil Survivor 2's story lacks some of the impact that Devil Survivor's had. Perhaps it's due to my being raised Christian, but the original's biblical leanings felt more consequential and dramatic than the cosmic threat anchoring Devil Survivor 2's narrative. After all, it's more memorable to thwart someone who might be the devil than an alien, no matter how freaky and inhuman. Thankfully, the cast of characters is more diverse in personality, with a Persona-esque relationship system that helps determine the path of the story.

Mechanically, Record Breaker continues the lineage of its series almost without alteration, which is a good thing, as Devil Survivor's combat system was hardly in need of fixing, and more engaging than the core Shin Megami Tensei's dungeon-crawls or Persona's more typical genre conventions.

Players are represented on an isometric grid, taking turns moving themselves and their companion demons across the map and engaging teams of enemy demons and their masters, each with distinct strengths, weaknesses, and usable skills. Attacking weaknesses during combat grants extra turns and opportunities to inflict damage. A new "evaluation" system allows players to earn extra money for performing efficiently, rewarding feats like eliminating an entire enemy team quickly or without taking damage.

Also as before, Record Breaker allows players to learn new skills by defeating specific enemies with a "skill crack" system. Fusing owned demons to create newer, more powerful ones that inherit their parent's talents creates a powerful approach to customization that will see the most successful players spending a lot of time tweaking and improving their "alpha teams" of optimized fighters. Record Breaker adds a few new demons to fuse and use, with the 3DS's online capabilities hinting at the possibility of DLC-additions in the future.

Atlus has spruced up the localization, editing typos, grammatical, and wording snags that made the first game read awkwardly for a title released in the age of Phoenix Wright and Danganronpa. Full English voice acting accompanies the refurbished lines as well, though the acting doesn't feel as talented as might be found in a higher-profile release such as a Final Fantasy or Persona.

More pertinent for veteran fans, is the addition of a whole new single-player campaign. Titled "Triangulum," the new content takes place after the original story, and addresses dangling plot threads while adding new characters. The original narrative wasn't missing much, but the extra chapter fits in with the larger canon better than Devil Survivor Overclocked's "Eighth Day" additions, as well as being a victory lap of sorts for a group that players will have grown close to over the dozens of hours necessary to complete the campaign.

All in all, Devil Survivor 2: Record Breaker is the definitive edition of the game, and should be a no-brainer for existing fans of the series. Newcomers shouldn't miss out either, as it presents deep, meaty gameplay and narrative experience that puts paid the notion that portable platforms can't be home to true enthusiast fare. Rating: 8 out of 10.


Disclosures: This game was obtained via the publisher and reviewed on the 3DS. Approximately 40 hours of play were devoted to both single-player modes, and the game was completed, with one ending obtained for each mode (of multiple).

Parents: According to the ESRB, this game contains violence, blood, suggestive themes, partial nudity, and use and references to tobacco and alcohol. Due to the nature of the gameplay most violence is shown in the third person and at significant distance, though close-ups are sometimes used for dramatic effect (bloodied faces or "event" scenes using bespoke artwork). Some character designs and outfits used during dialog and and cut-scenes may be considered risqué or revealing by some.

Deaf & Hard of Hearing: All dialog and cut-scenes have text and subtitles, though voice-acting is in English only. All relevant gameplay information is conveyed visually or via text, so the game can be played in silence if necessary.