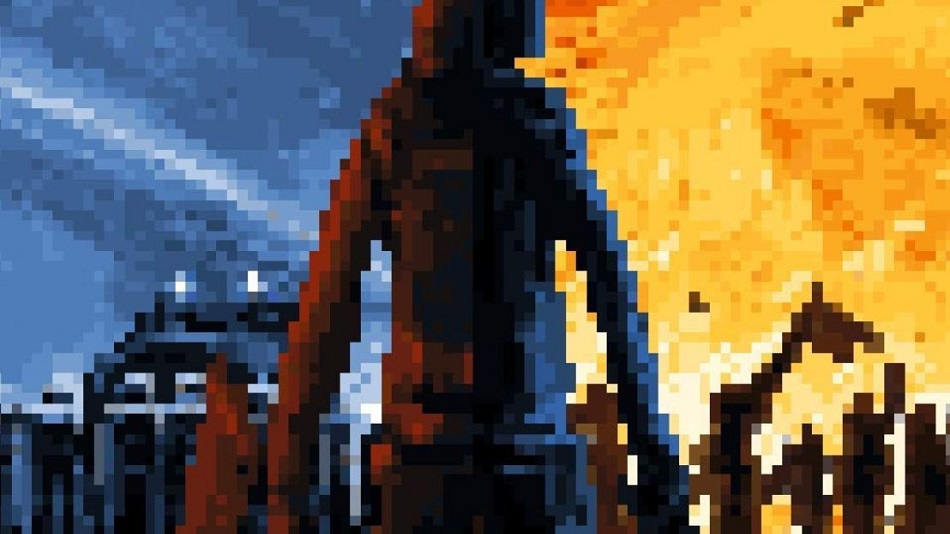 LOW …with mechanics that drain the topic of all life.

WTF I kind of wish this was a screensaver instead.

Riots and protests are perhaps the most powerful manifestations of societal disorder that can happen in modern society. They’re a uniquely disruptive expression of the complexity of the contexts and conditions that bring them about. It’s no surprise, then, that few have tried to translate that same complexity into game form. However, Riot: Civil Unrest is one such, and much to my disappointment, it demonstrates why the task is so difficult.

If nothing else, it’s clear that creator Leonard Menchiari has honest, laudable intentions. Inspired by a personal experience during the Italian “No TAV” protests of 2012, Riot‘s stated goal is to capture the emotions and moods of protests and mass movements as they teeter on the verge of violence, and sometimes topple over into that abyss. Riot takes the form of a tactical game, granting players control over either the protestors (or “rebels” in the game’s terminology) or the police, in locations based on real-world protests from the last decade. The “No TAV” protests Menchiari attended are present, as are maps from Cairo’s Tahrir Square (epicenter of the “Arab Spring” revolt). Spain’s “Indignados”, and Greece’s Keratea.

Opposed in all scenarios, the rebels and police clash across the maps, each side attempting to accomplish a simple objective on a short time limit. Rebels are usually tasked with taking and holding areas or protecting key structures or people, while Police must maintain order by dispersing the crowds or taking out marked structures. The Rebels have the weight of numbers and move in large crowds, but lack fine control, forcing players to keep switching actions to keep the crowd focused or to prevent them from fleeing in fear if the Police get violent. Police have a varied range of powerful units and can move in formation, but need to coordinate to keep from getting drowned in a sea of angry people. 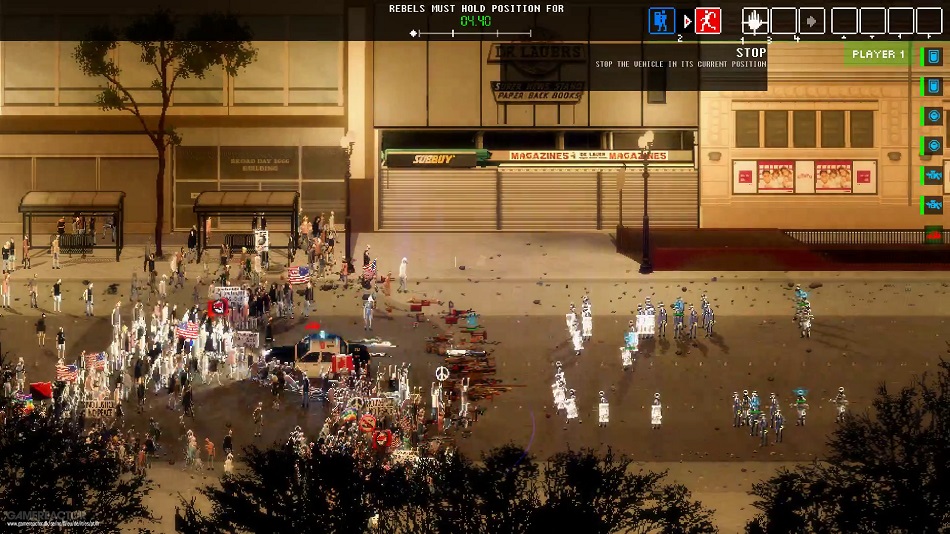 This sounds like a great scenario for tactical viability and pointed political commentary, but unfortunately, it’s in the execution that Riot falls apart. In practice, the game is simple and repetitive, varying outside the handful of basic objectives only in difficulty. None of this is helped by a near-total lack of handholding or even a basic control tutorial, leaving players who start the game as confused as a random bystander at an actual protest. I spent most of the first few story campaigns wandering dazedly around the map, pressing buttons and often simply winning when time ran out, not knowing what exactly I had done to secure victory.

A bit more poking around made things clearer. Other than the obvious difference in numbers, the Rebels and Police have greatly varying basic toolsets with which to accomplish their goals, though both operate at the most basic level by – on console, at least – swapping between controlled units and issuing orders to each in turn.

The Rebels can use social media to increase their numbers, deploy megaphones to shore up the crowd’s resistance to being pushed around by cops, and even engage in a powerful sit-down maneuver to block the authorities’ paths. Players can also switch crowds between “defensive” and “offensive” stances, which determine which tools are available (going offensive is when people start breaking out rocks and molotov cocktails) as well as prompting a reaction from the other side. Rebel players should take care when using offense, as pushing the cops too far could lead to them reacting violently in turn.

Similarly, the Police have a range of options, from shield units that can wall off whole sections of the map to truncheon-wielding riot cops that can rush in and scatter a packed mob. Police players also need to watch their actions, since their units are constantly outnumbered and the press is always watching.

Looming over all of this is the specter of a “political result” — essentially a score value that represents public opinion, and can be driven up or down by perceptions of the factions’ conduct in the scenario. At least, that’s the idea of the thing, and I would be over the moon if the experience of playing Riot actually felt this way. 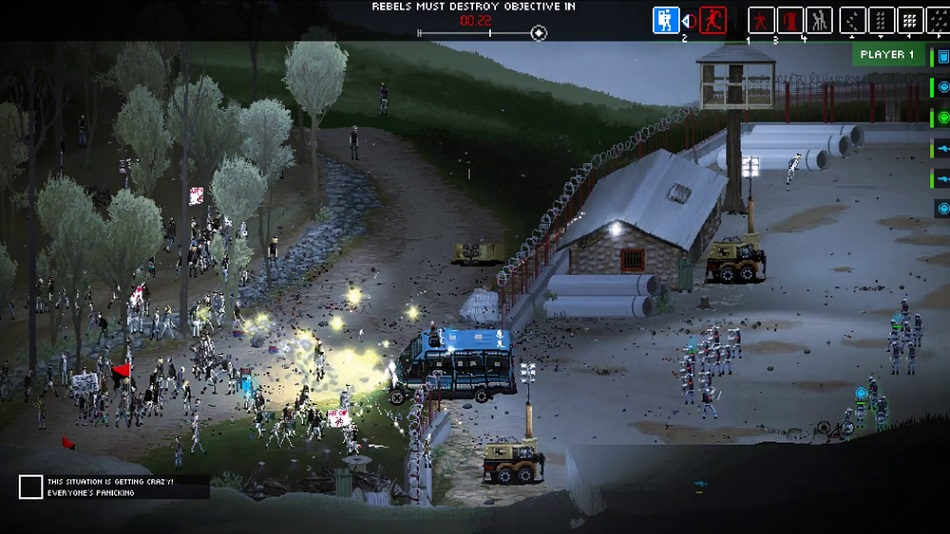 Instead, the gorgeous pixel-art graphics that delivered an impact in the first trailers and early access debut render the strategy mechanics basically unreadable. The sheer density of the crowds, a mob’s natural resistance to intricate control, and the inability to command units en masse make any kind of coordinated plan impossible to pull off in detail.

Further, repetition can set in for Rebel player, because triggering special abilities requires that the actions be done for each group of protesters in turn. If one wants to, say, rally the whole crowd or set up a volley of rocks or firebombs, one must rapidly switch between every group on the field and press the same sequence of directional buttons, shoulder buttons, and face buttons in turn. If I were being generous, I’d say that this is a reflection of how hard it is to coordinate mass action, even with the god’s-eye camera perspective. Unfortunately, this kind of thematic consistency doesn’t make for engaging or interesting strategy. Those playing as Police face a similar issue, but the stricter stratification of unit roles at least makes each group look and behave differently by design, keeping play readable.

With the story mode largely functioning as a tutorial of sorts, the “Global” campaign is where most players will spend their time. After choosing a side, players are pushed through a semi-random set of scenarios in roguelike fashion, with difficulty escalating based on public opinion, in turn affected by the player’s conduct. A custom scenario editor is included on the PC version, with various player-created stages available via the Steam Workshop, but I haven’t found its like on the PS4 version I played.

More disappointing than flawed mechanics are the way Riot‘s attempts to grapple with the politically-charged nature of its topic feel flat and unsatisfactory. Rather than embracing the value of mass action and the factors that drive demonstrators (and police) to resort to violence during protests, Riot invariably views all escalation on either side as an absolute wrong, penalizing it in all circumstances. This has a knock-on effect for gameplay, where players are encouraged to avoid escalation as much as possible, in essence limiting the tools that they can use to make the scenarios more interesting (and in some cases, more historically accurate). 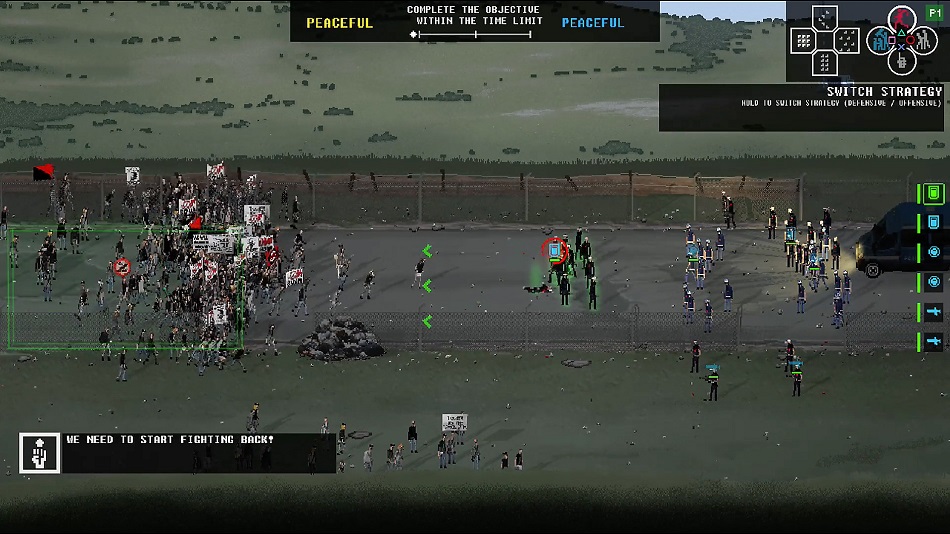 This kind of restriction might be fine for a more artistic ‘statement piece’, but it feels like Riot‘s message is too muddled and insubstantial to qualify it as such. There’s little material that exposes the human story behind these all-too-human expressions of anger and dissatisfaction, and the actual historical information is more limited than what might be found from cursory glances at Wikipedia. I’m left wondering what Riot wants to say, and what emotions it wanted to capture from the experience of being in the midst of a mass movement. It certainly captured the confusion, chaos, and even the occasional tedium of attending a protest, but beyond that, I’m left grasping.

There’s no denying that Riot: Civil Unrest is earnest in its attempt to bring game mechanics to a complex, weighty topic, but ultimately it fails to execute on its ambitions, delivering neither a satisfying strategy game nor a novel exploration of its chosen topic beyond its evocative and memorable art style. And as we’ve learned from political movements throughout history, enacting lasting change is about more than presentation. Rating:  4.5 out of 10

Disclosures: This game is developed by  Leonard Menchiari and IV Games and published by Merge Games. It is currently available on PC, PS4 and Nintendo Switch. This copy of the game was obtained via publisher and reviewed on the PS4. Approximately 10 hours of play were devoted to the single-player mode. The game was completed. Local multiplayer was tested.

Parents: According to the ESRB, this game is rated Mature and contains descriptors for Blood, Strong Language, and Violence. The events depicted are based on real-life occurrences in which fatalities occurred. Police and rioters can inflict lethal violence, and crowd scenes can be stressful to view, though are not particularly graphic or realistic in style.

Deaf & Hard of Hearing Gamers: All interaction takes place via text and visual interface elements. There is no voiced dialogue. This game is fully accessible. 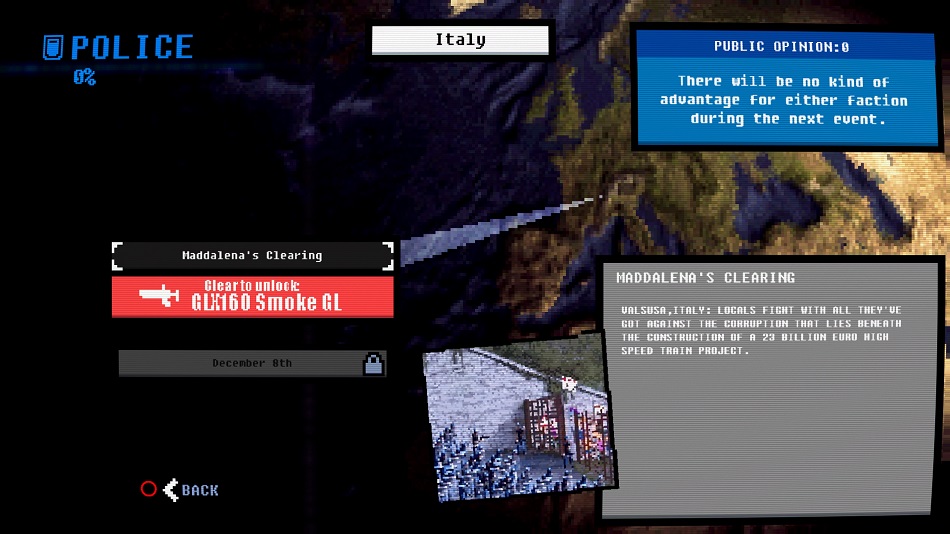 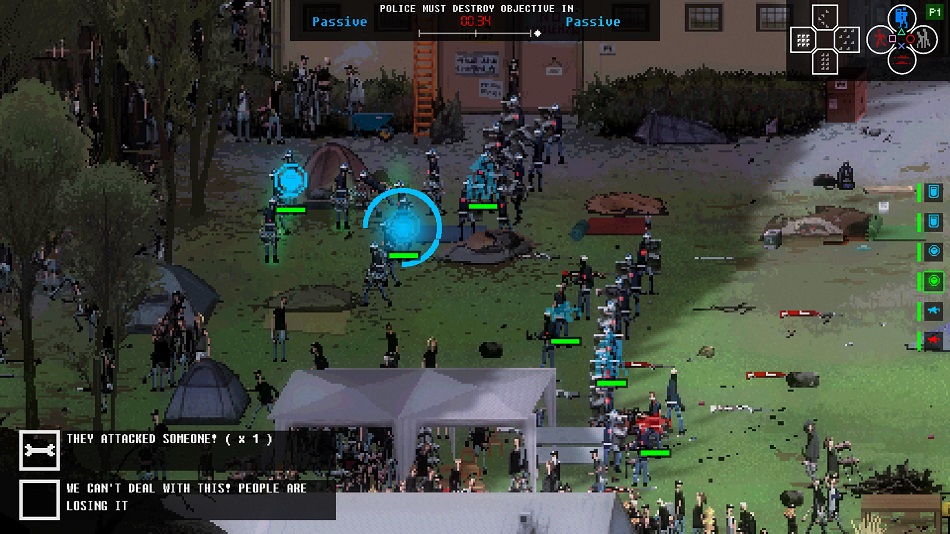 I am floored by the sheer amount of effort and the details you found to review Riot: Civil Unrest.

I feel like the Nintendo Switch needs more games that aren’t only of simulation kind but of Strategy as well.

Well, I have never heard of IV Productions’ real-time riot simulator before, until this review article.

It’s a nice real-time strategy game from 1997 that might just make a good alternative if anyone finds Riot: Civil Unrest unpalatable.