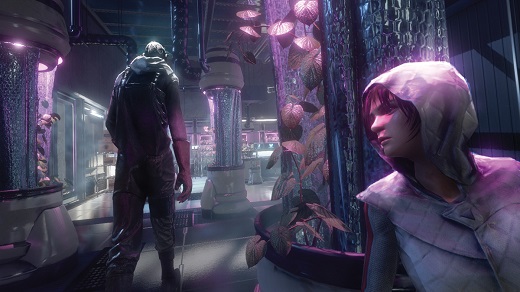 The classic image of the surveillance state—one of all-seeing cameras following normal citizens doing their daily business—is now a bit quaint. The reality is less a forest of glass-and-steel eyes than an invisible stream of data flooding into hungry servers, ready to be parsed, interpreted, and exploited by government and corporations alike. République invokes the former, old-school image of Big Brother and gives it a modern twist.

The player is cast as a helpful stranger given an unprecedented level of access to the security systems of a place called Metamorphosis; an apparent dystopia ruled over by an enigmatic (but verbose) Overseer. The task at hand? To secure the freedom of a girl named Hope and guide her past threats and around obstacles, with the player's only method of interaction being through ubiquitous security cameras.

Barring obscure adventure titles like The Experiment and Lifeline, the camera-hopping conceit in République lends it a unique, almost voyeuristic edge as players zoom in and pan cameras to keep track of Hope. Add to that the abilities available in "Omni-View", a time-stopped overlay of the world allowing players to unlock doors, open safes, and scan enemies' biographical data. In this situation, the player becomes a powerful but disembodied guardian angel clearing a path for a beleaguered young woman.

The narrative propelling Camoflaj's debut effort is a dense, thematically rich parable backgrounded by an almost cartoonish exaggeration of a dystopian police state. It's as if one had asked Hideo Kojima to do a take on 1984, Fahrenheit 451 or the working conditions at Konami towards the end of Metal Gear Solid V's development.

While playing, it's a delight when Hope finds one of Metamorphosis' "banned books" collectibles, as each triggers a brief critique of classic literature (including the aforementioned 1984 and Fahrenheit 451) from the perspective of the authoritarian dictator. Imagine high school book reports as delivered by an unholy hybrid of Kim Jong-Il, Mao Zedong, and Emperor Palpatine, and the engaging nature of République's world and tone becomes more evident.

The voice acting on display is uniformly excellent, with luminaries like Jennifer Hale, David Hayter, and Khary Payton delivering stellar performances. The supporting characters are also well-realized. Dwight Schultz in particular stands out in his perfectly hammy rendition of the overseer.

While the areas I've outlined shine, République's origins as both a crowdfunded project and mobile-based game are unfortunately evident.

Though the PS4 version has gained graphical improvements to bring it up to par with native titles, the gameplay feels tuned for the slower pace demanded by the touch controls of tablets and phones. The stealth is also a bit simplistic, with enemies on the dimmer side of the spectrum. By the standards of contemporary stealth-action or survival horror games, République moves and plays at a near-glacial pace, more reminiscent of the original Resident Evil or Metal Gear Solid than a game released in the last four or five years.

The early episodes also suffer from some of this pared-down mobile design, and are signs of Camoflaj finding its feet as a developer. Later episodes are more ambitious and employ their world building, mechanics, and perspective to deliver some genuinely unforgettable moments, one of the best being a tongue-in-cheek acknowledgement of the game's shout-outs to other, actual indie titles. (Fair warning, some players may see these as crass or immersion-breaking).

On balance, République lives up to the promise of its long-ago Kickstarter pitch, and delivers an engaging, well-built adventure from its humble beginnings as a crowdfunded indie effort on a shoestring budget. Rating: 8 out of 10

Disclosures: This game was obtained via publisher and reviewed on the PS4. Approximately 20 hours of play were devoted to the single-player mode, and the game was completed. The author of this review backed Republique in its original crowdfunding campaign.

Parents: According to the ESRB, this game contains blood, strong language, and violence. The game features an underage protagonist who can be tased or killed by guards if attacked. Some scenes show characters being shot at close range, and others inflicting verbal or physical abuse on child characters. Some optional outfits may be considered revealing.

Deaf & Hard of Hearing: Voiceovers are in English, and all dialog in the game can be displayed with subtitles.

Remappable Controls: The game does not have remappable controls, though the functions of a given button are context-sensitive and clearly marked onscreen most times.