No Idol To Worship 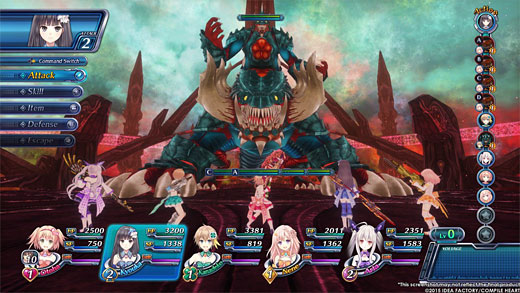 HIGH Setting up a perfect chain of Harmonics attacks

LOW The wet dishrag of a main character

Omega Quintet is the kind of Japanese role-playing game that makes one wonder if it's really such a good idea that gamers can access almost any title they can think of, regardless of who the game was originally made for. Part of developer Compile Heart's "Galapagos RPG" sub-brand (a clever reference to Galapágos Syndrome), Omega Quintet's roots in Japanese pop-idol subculture run deep, and it makes few overtures to bring the unenlightened up to speed.

This crisis of cultural confidence doesn't last too long, though—the unfortunate truth is that Omega Quintet is simply not a good game. Even true believers would have trouble excusing the many levels on which the game feels half-hearted, undercooked, and lazily put together—it's a far cry from the same developer's comparatively refined Neptunia series. It's a pity because the initial scenario seems so promising, in that peculiar, anime-fan fashion.

The narrative centers on a pop-flavored post-apocalypse, where humanity has been pushed within the borders of its last remaining cities by a mysterious force known as the Blare. The only thing that can stand against the Blare is the will of the people, channeled by the Verse Maidens: a specially trained corps of battle-tested pop stars, their every fight broadcast via reality TV.

The story begins just as Momoka, the last active Verse Maiden, is ready for retirement. Saving the male lead Takt and his childhood friend Otoha from a Blare ambush leads to Otoha awakening her own Verse Maiden powers. Otoha is quickly recruited as the newest Verse Maiden, and joins newbies Kanadeko, Aria, Nene, and Kyouka to form a five-idol unit, with Takt as their manager. Together they sing, dance, and beat the tar out of monsters for the good of humanity and the adoration of the fans.

At least, that's the idea.

The reality of Omega Quintet is a miasma of unrelenting tedium surrounding a deep and complex battle system, shot through with skin-deep send-ups of idol culture and Japanese internet memes. Unfortunately, the lack of an appreciable idol subculture outside Asia means that many of the game's cultural "hooks" will be ineffectual for a Western audience. At least the Neptunia titles and their depiction of anthroporphized game consoles provided common ground for an overseas fandom to form and grow.

That lack of foundation in Omega Quintet, combined with a lackluster localization job, makes the game's inane, "wacky" conversations between anime archetypes stand out in their charmlessness. The jokes are one-note, and repeat themselves constantly: She's old but looks young! She's ditzy! She's got a gun fetish! Whoops! He walked in while she was in her underpants! Even by the tempered expectations and standards developed through years of anime-nerd "B-games", Omega Quintet's writing is almost aggressively mediocre.

It doesn't help that Takt, ostensibly the lens through which the player is supposed to view the clutzy-cute antics of these wannabe magical girls, is one of the least likeable main characters ever conceived. Where most video game leads are (at minimum) inoffensively bland and generically heroic, every word out of Takt's mouth is laced with witless snark and a downer mentality that seems mistaken for disaffected "cool". If Takt were an actor in a live-action TV show instead of a video game, one would swear that he was actively trying to tank the production. However, it's not just the main character that feels phoned-in. Omega Quintet's structure is a bare-bones approximation of narrative progression.

Players control Takt as he meanders about a hub area, chatting up the Verse Maidens for pointless one-liners or events that raise his "affection" rating with the girls (and sometimes resulting in a panty-shot or boob-related humor). Missions can be selected from a menu, usually ranging from killing a certain number of enemies to performing certain mechanical tricks in battle. Exiting one menu leads to another, where players visit other destinations to see more events, gather up side quests (usually to find some item in an inconvenient location), and teleport to one of the game's field areas. In the fields they can explore, find treasure, and fight monsters.

On the plus side, fighting monsters is where Omega Quintet shines brightest. Despite doling out the systems far too slowly via unhelpful Powerpoint-style tutorial slideshows, the combat mechanics reveal an engaging level of depth, full of the kind of arbitrary complexity that can make many JRPG battle systems enjoyable to dissect, master, and even abuse.

Battling centers around the use of actions, including spells, special attacks, and physical blows to manipulate the sequence of turns. Takt himself can be paired up with individual Verse Maidens, allowing him to perform follow-up attacks, to shield the girls from damage, or to boost their damage. Then there's the Live Concert attack, one of Omega Quintet's few explicit nods to the fact that its characters are all performing artists. Charging up the Voltage gauge, which represents the mood of the audience, allows the group to unleash powerful, mini-cutscene-driven combo attacks, complete with dramatic poses and blasting pop songs.

Between battles, Takt can craft new outfits, accessories, and weapons for the girls using materials gathered from fallen enemies. Training modes allow for level and affection-point grinding, and the detailed-but-superfluous "PVS" mode allows players to create their own music videos, arranging canned dance animations and camera angles in surprising detail. It's a shame that the mode isn't more deeply integrated into the main game, or for that matter, any mechanical or aesthetic reinforcement of the initial theme. That there's so little actual performing going on in a game that's about celebrity performers speaks to the scattershot nature of the final product.

Ultimately, that's just what Omega Quintet is: a product. It's not broken, and at times it threatens to be interesting to more than the already-converted, but it's utterly lacking in the heart and spark that helped other Compile Heart titles lineup transcend their inauspicious beginnings. Rating: 5 out of 10


Disclosures: This game was obtained via the publisher and reviewed on the PS4. Approximately 45 hours of play were devoted to the single-player mode, and the game was completed.

Parents: According to the ESRB, this game contains: fantasy violence, language, partial nudity, suggestive themes, and use of alcohol. Characters that are implied to be underage are placed into sexually suggestive situations, and during combat female characters can have their clothes damaged, exposing skin. Some art used in cut-scenes depicts characters in their underwear or partially nude.

Deaf & Hard of Hearing: Subtitles are provided for dialog and cut-scenes, though vocal "barks" issued by characters when exploring on the map are not subtitled, preventing deaf players from knowing they spoke a line.