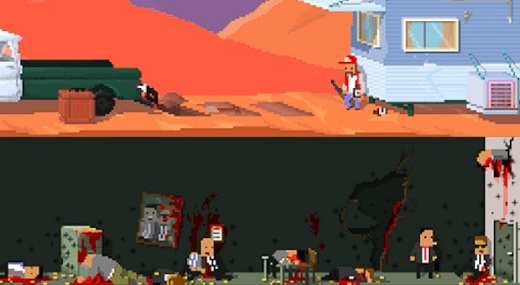 HIGH Every word coming out of Bunnylord's mouth.

LOW Sliding when I meant to take cover.

WTF "I'm going to get the one with chocolate sprinkles and bits of man in it."

"Make the bunny mayor, or the world goes up in nuclear fire" is a rather compelling stump speech to make when elections are nigh. It also happens to encompass roughly half of Not A Hero's irreverent plot. The other half consists of the campaign to elect candidate Bunnylord, a giant purple rabbit who's running on a platform of murdering criminals. The player comes in as his "campaign strategist."

This knowingly-thin premise, an amalgam of The Punisher with shades of Donnie Darko and the pixel-punk aesthetic drawn from Hotline Miami is just the right kind of wink-wink narrative to propel Roll7's newest project. In Not A Hero, the devs manage to combine the obsessive, perfectionist appeal of their own OlliOlli skateboarding platformer with the typically chaotic scramble that characterizes the 2D shooter experience.

Other titles in the genre such as Metal Slug, Contra, and the like have little concern for precision or the pursuit of a "perfect" run, but Not A Hero preserves that seat-of-the-pants craziness while raising the ceiling for truly skillful play. This is accomplished by boiling the mechanics down to their essence, and eliminating tawdry distractions like having to press buttons, aiming up or down, or jumping.

For example, rather than hopping into the air, one can instead perform a slide-tackle, which functions as both evasive dodge and helpful distance-closer. Actions such as toggling switches and picking up items are accomplished automatically by standing in front of them. These choices streamline the experience and free the player to concentrate on perfectly timing movement, shooting, reloads, and the use of cover. And as in OlliOlli, each mission comes with a set of sub-objectives that encourage speed, risk-taking, and other hallmarks of what a younger version of me might call "mad skillz." It's a masterful demonstration of the virtues to be found in flowing, focused design.

Not A Hero also keeps things fresh by giving every player multiple ways to tackle any given stage in the form of different characters—each one brings a unique style and solution to the combat challenges.

Dual-pistol Steve is all business, with lengthy slides and rapid reloads ensuring precise, professional combat. Cletus, the shotgun-toting hillbilly pretending to be a Scotsman, necessitates a different tack thanks to his slow reloads, lessened range, and ability to blow open closed doors to knock over hiding foes. The variety extends through the game's nine-strong cast of campaign consultants, allowing players to pick and choose their favorite killer based on preference.

There are, however, mild quibbles to be found in this otherwise silky-smooth score-chase. While it's best played with a controller, some odd control choices take some getting used to—for instance, seeing ‘cover' and ‘slide-tackle' assigned to the same button is a weird one. Until I consciously chose to be more deliberate about planning my actions, I died more than a few times by sliding when I meant to take cover. The PC version also has some odd hitches when loading stages, as well as strange stuttering in the main menu. They're unfortunate blemishes that dampen the appeal of doing "just one more try" when going for a perfect run.

Not A Hero may not star a hero, but it is a heroic effort to freshen up the 2D shooter scene. It's not easy to stand out in the vast crowd of pixel-art indie productions these days, but Roll7 pulls it off, and such craft is enough for Bunnylord to get my vote. Rating: 8 out of 10.


Disclosures: This game was obtained via the publisher and reviewed on the PC. Approximately 6 hours of play were devoted to the single-player mode, and the game was completed.

Parents: This game's ESRB and PEGI ratings are pending, though based on the play experience a future rating would likely contain descriptors for intense violence, blood and gore, drug and alcohol reference, strong language, crude humor, use of tobacco. Though the pixel art style of the game is unrealistic, most characters engage in many violent shootouts, and some characters are seen brutalizing or torturing others.

Deaf & Hard of Hearing: Subtitles are provided for dialog and cut-scenes, though vocal "barks" issued by characters when exploring on the map are not subtitled, preventing deaf players from knowing they spoke a line.