Life’s A Witch And Then You Retry 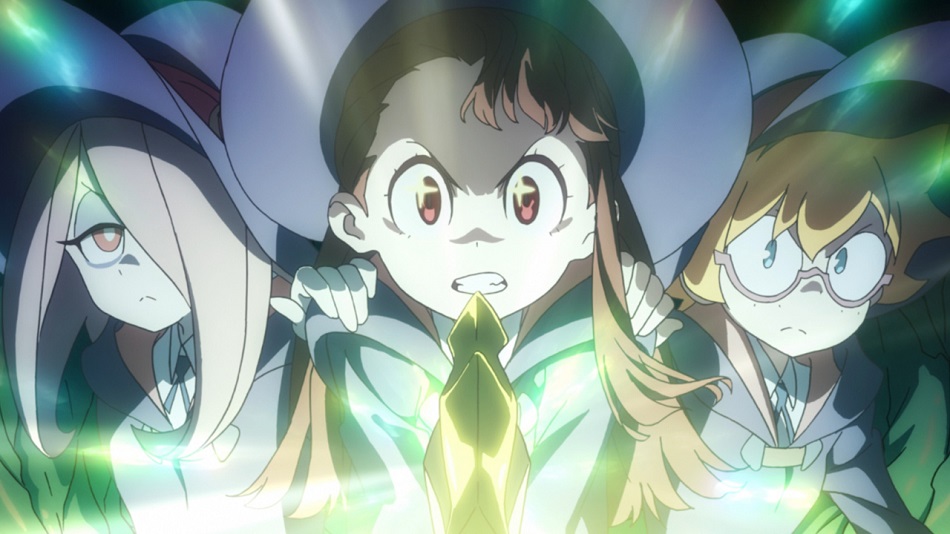 LOW …that is absolutely not reflected in the gameplay or structure.

WTF Is it really a good idea to make Little Witch Academia fans work this hard for their fanservice?

Once, there was a time when virtually anything new in pop culture could be described as “Harry Potter, but…,” with the rest filled in by any number of gimmicks. Not even Japan’s anime industry was exempt from chasing the trend, and one product of this young-adult witches and wizards craze was Little Witch Academia.

A lighthearted and colorful production from famed anime studio Trigger, Little Witch Academia entranced many a fan with the world of Atsuko “Akko” Kagari, a newbie student at the Luna Nova Magical Academy, the premier educational institution for budding young witches. Seeking to follow in the footsteps of her idol Shiny Chariot, Akko makes friends at school and overcomes a number goofy crises (some of her own making) on her way to greatness.

Little Witch Academia: The Chamber of Time occurs in the same setting as the anime, and even takes pains to insinuate itself into the series’ timeline. CoT is set on the last day of school before summer vacation, following Akko as she scrambles to eliminate any potential obstacles to a long period of fun in the sun. Akko unfortunately gets herself into trouble thanks to an impromptu interaction with a mysterious clock that strands her and her friends in a time loop, destined to repeat the last day of school ad infinitum unless they can find a way to break the cycle. I have to admit, as much as Little Witch Academia was a transparent Potter-alike, “Harry Potter, but Groundhog Day” is one of the more interesting hooks to try to distinguish oneself with.

Aesthetically, Chamber of Time absolutely nails the series aesthetic, and this is high praise considering that the style, embodied in director Yoh Yoshinari’s love of exaggerated effects and rounded character designs, don’t immediately seem compatible with the precision shapes 3D game engines prefer. And yet it all works, putting Chamber of Time alongside the likes of Dragon Ball FighterZ and the Naruto Ultimate Ninja Storm games for evoking 2D anime styles with 3D game graphics. The writing’s no slouch either, replicating the chipper characterization of (pretty much) the whole cast of the anime, with everyone that matters getting time in either the main story or one of the many sidequests or random conversations. CoT even goes the extra mile with original anime footage cooked up for certain sections. 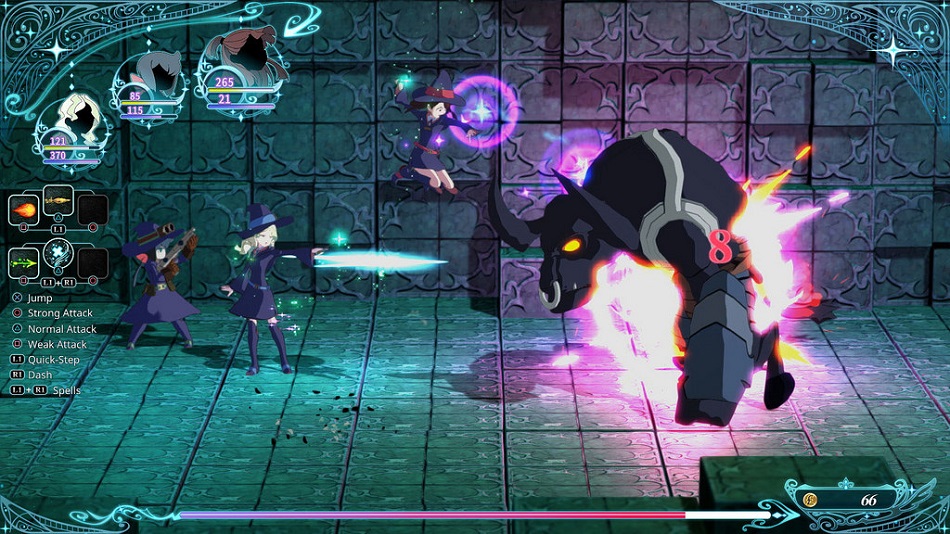 If only Chamber of Time was as enjoyable to play as it is look at or listen to. Ironically, where ambition serves developer APlus well in tailoring the graphics to match the show, the attempt to go above and beyond in terms of gameplay and mechanics end up undermining an experience that’s split in two halves — an adventure game that sees Akko traipsing about Luna Nova, and a side-scrolling beat-’em-up set in the school’s monster-filled dungeons, featuring a party of any three (of seven) playable witches.

Both halves are deepened by JRPG-style progression mechanics such as equipment upgrades, item crafting and spellcasting, and there’s a surprising amount of depth on display. Every witch has a unique set of moves, stats and skill trees to develop alongside equipment upgrades and unique effects for battle. Unfortunately, this level of detail feels wasted on the execution. All the tweaking one can do comes to naught when sluggish controls, serious issues with depth perception, and brain-dead AI companions make playing a chore. Similarly, boss battles seem creative with each having a puzzle-like gimmick governing their fight or their home dungeon, but poor signposting makes these fights tough to parse without a lot of trial and error that saps their energy.

The adventure game sequences work a bit better, and thankfully so, since they’re where players will spend the bulk of their time. Luna Nova’s population operates like clockwork, and it’ll be up to Akko to learn it and know where – and when – she needs to be as the loops go on.

Many quest objectives are time-sensitive, and some tricky schedule management will be needed to catch the right person in the right place at the right time. Failing this, players will need to wait for the next time loop to try again. This sounds great on paper, but the quest design fails to make the most of this unique conceit, instead preferring to send Akko back and forth across Luna Nova’s confusing layout, talking to one person, then being sent to the other side of school to talk to another, all to find out that she really just needed to go to someplace in the middle. To rub it in, the middle is locked and more people will need to be tracked down to reveal the location of the key.

This type of design is an infuriating and transparent attempt to pad out the length of the game by making simple quests take longer to complete. Worse still, the occasional need to fire off a spell or two is entirely governed by Akko’s magical potion supply, which can only be replenished by spending money earned by repetitively grinding dungeon battles.

It breaks my heart that Little Witch Academia: The Chamber of Time turned out the way it did, because the aesthetic success is undeniable, as is APlus’ attempt to design something that functions on a deeper level than just delivering fanservice. The problem is that their attempt resulted in a game that makes players feel like their time would be better spent simply watching the show again. Rating:  5 out of 10

Disclosures: This game is developed by APlus Games and published by Bandai Namco Games. It is currently available on PS4 and PC. This copy of the game was obtained via publisher and reviewed on the PS4. Approximately 27 hours of play were devoted to the single-player mode. The game was completed. There are no multiplayer modes.

Parents: According to the ESRB, this game is rated Teen and contains descriptors for Violence, Suggestive Themes, Partial Nudity, Crude Humor. The characters occasionally wear skimpy outfits, and enemies are dispatched with magic and occasionally violent-seeming attacks. Some characters also use guns as their main weapon.

Deaf & Hard of Hearing Gamers: All interaction takes place via text and visual interface elements. No audio cues are required for play, though some in-game voice clips are not subtitled. It’s fully accessible. 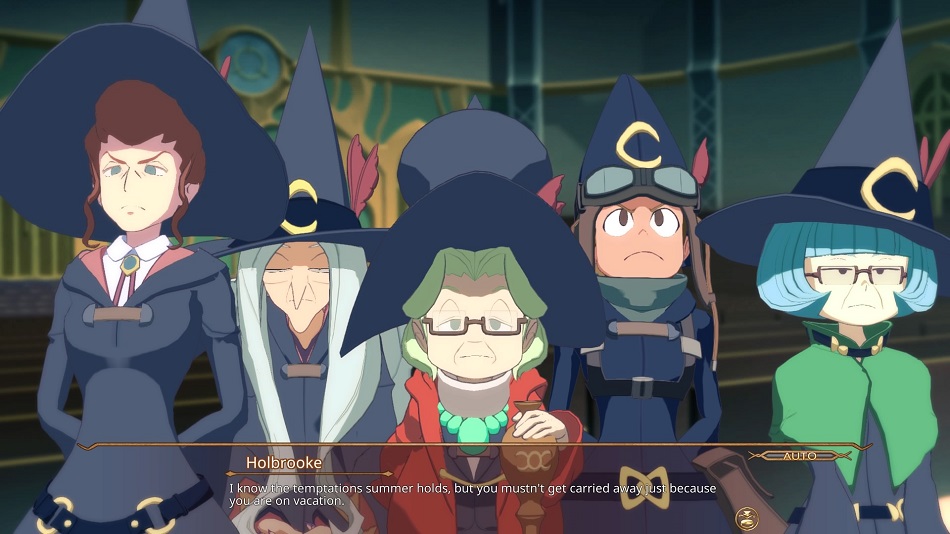 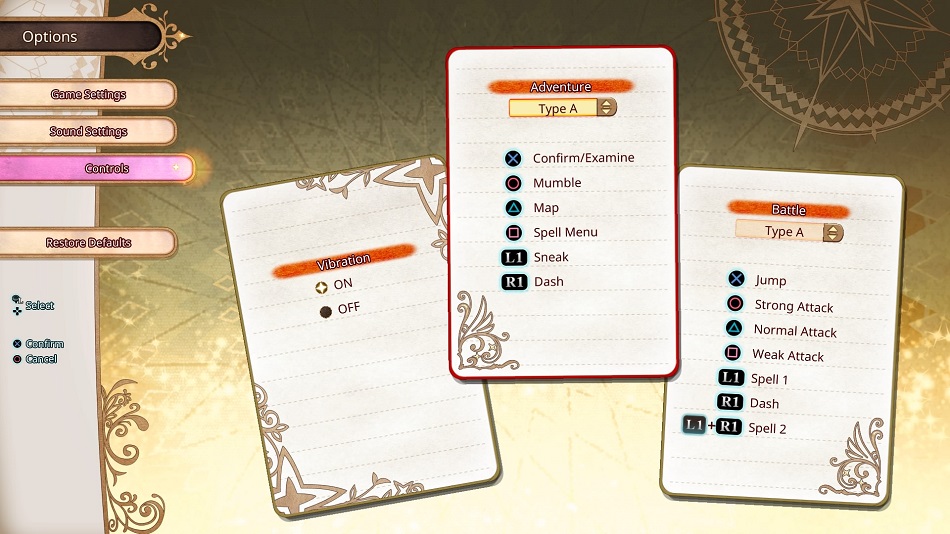