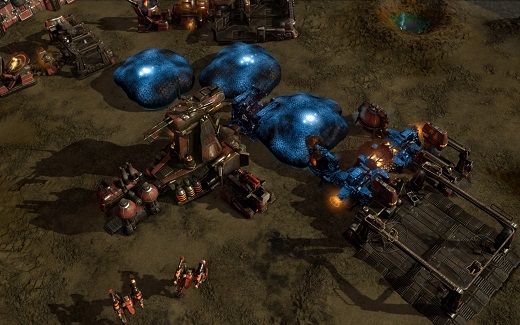 Though the science fiction premise of Grey Goo is largely based on the apocalyptic scenario of the same name which involves out-of-control nanotechnology consuming the world, the experience of playing feels more like a time travel yarn. Specifically, Petroglyph's work transports players to an era long past, when the real-time strategy game was the dominant feature of the PC gaming landscape, and the Command & Conquer series (C&C) was the premier RTS franchise.

Unsurprisingly, given the developer's strong connections to C&C creators Westwood Studios, Grey Goo feels like nothing so much as a direct descendant of that particular lineage. Apart from a more Starcraft-like orientation towards right-click-based control when it comes to unit management, Grey Goo even plays like a classic C&C spinoff, right down to the emphasis on macro-scale base-building and economic buildup over tactical finesse. Indeed, the preferred strategy in the average Grey Goo match is to survive long enough to build up a whole bunch of tanks and then roll over the rest of the map in a big ol' mass of deadly materiel.

The distinction, then, is in presentation and feel rather than fundamentals. Grey Goo pits three futuristic factions against one another on the faraway future planet of "Ecosystem 09." The four-armed alien Beta are a race of refugees on the run from a mysterious aggressor known as the Silent Ones, and they encounter human explorers prospecting for resources. First contact goes poorly until both sides must unite to fight off the titular Goo, a mass of nanotech gone wild.

In many ways, it's the most impressive single-player strategy game campaign since Starcraft 2's, and its presence stands out as a pleasant anomaly among contemporaries that tend to treat story and personality as a peripheral concern before multiplayer. Sadly, the plot ends on an unpleasant cliffhanger, clearly setting up for a sequel that isn't guaranteed. And, despite the quality of the cinematics and the intriguing nature of the core premise, the setting itself lacks the charisma needed to make it stand out the way the conflict between GDI and Nod, or Allies and Soviets used to. Even Petroglyph's previous game, Universe at War, could boast more compellingly creative alien races.

On the plus side, Grey Goo's factions play differently. The aforementioned focus on macro-scale economics makes the distinctions between Beta, Human and Goo most apparent when it comes to production and manufacturing strategies. The Beta are flexible and can build anywhere, but their bases must be connected to "hub" structures with limited capacity to attach production or upgrade facilities. Humans must have all their structure connected by power lines to a central hub, but can move their structures at will along the network, allowing for rapid re-allocation of defenses when under pressure. 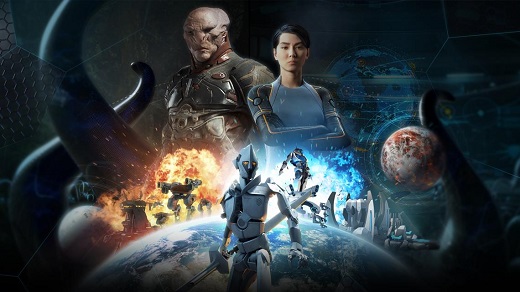 However, whereas the Humans and Beta are fairly traditional RTS factions (and perhaps seem a little too similar in terms of overall unit selection) the Goo play completely differently from almost any extant faction, even across different franchises.

In keeping with the theoretical versatility of self-evolving nanotech, the Goo don't create buildings. All Goo creations spring from a single "Mother Goo" unit that grows when planted onto a resource point, splitting off masses to morph into various units. Goo players are thus highly mobile and able to bypass the other two factions' defenses. multiplying quickly in classic Zerg fashion.

Tipping the scales for each group are Epic Units—fabulously expensive super-units that can turn the tide of a battle single-handedly. The Beta Hand of Ruk is a hovering military base that can produce units on its own, shoot nuclear cannon shells, and mount other units on its sides for defense. The Human Alpha is a giant robot with an instant-kill laser beam weapon. The Goo Purger accelerates the growth of nearby Mother Goos and smashes things with massive tentacles. While still vulnerable, managing to build and exploit an epic unit feels like a great way to end a pitched battle, especially when both Beta and Humans are so adept at heavily defensive strategies.

Despite Grey Goo's almost retro feel, Petroglyph has implemented a number of mechanical and interface tweaks that make this classic style of RTS more accessible and easy to get into. Unit and building production is condensed into a quickly accessible set of universal branching hotkeys, allowing quick memorization of what to press in order to build what. Timers and economic indicators built into the HUD make it easier to tell how much impact a particular construction job will have on resource income, and ubiquitous build timers count down in real seconds, allowing more efficient tasking and optimizing production.

Tech upgrades, too, fit in well with the game's distilled philosophy. Each upgrade feels meaningful. Rather than simply adding more health or armor, a player's choice of upgrade can dramatically alter the way a unit is used, the better to tailor it to a particular playing style or strategy.

For example, upgrading the Goo Crescent's artillery projectile prevents enemy anti-air units from shooting it down in mid-flight, but also reduces its damage and blast area, requiring more Crescents to be built to do the same job. Upgrading the Beta Predator's cannon reduces the number of rounds it shoots in a single volley, but allows the Predator to switch targets quickly—perfect for fighting an opponent that may be attacking with masses of cheap units. Simple and meaningful decisions like that give each faction character where the narrative falls short.

Grey Goo also comes with a robust set of multiplayer modes and single-player skirmish options. At the time of this writing it did not take long to find random players to match with, and latency was not especially apparent. Skirmish mode AI is efficient even at easy difficulty, and should pose a worthwhile challenge in the absence of a flesh-and-blood opponent.

In the end, Grey Goo feels like a complete RTS package, built to spec in a time when enthusiasm for the genre is at a low. It helps show there's life yet in the formula pioneered by the likes of Command & Conquer and Dune, and while it might not have the weight to stand up against the likes of Starcraft 2, its own place in the contemporary strategic constellation is secure. Rating: 8 out of 10.

Parents: According to the ESRB, this game contains violence and blood, with cautions against user-to-user interaction during multiplayer chat. Most of the units in the game are robotic drones, and the violence is viewed at significant remove thanks to the nature of the gameplay.

Deaf & Hard of Hearing: Subtitles are provided for dialog and cut-scenes, though alerts such as indicators of bases or units coming under attack are audio-only, which may hamper situational/strategic awareness among hearing-impaired players.

Looking forward to a Mac version. Thank you for this extensive review.