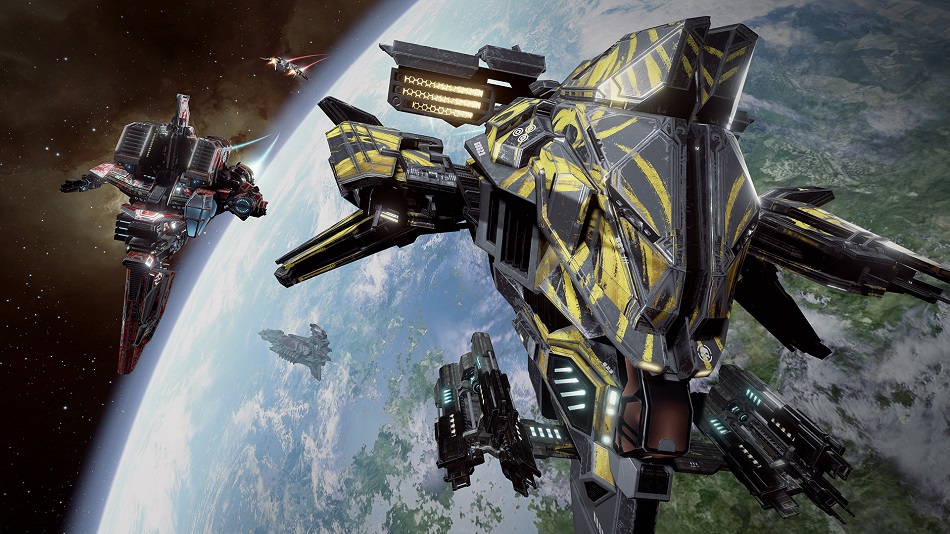 HIGH Well-tuned dogfighting with or without VR.

Everyone has a game that they admire more than they enjoy — the kind of thing they’d rather read about in articles or hear about from devotees than actually play, or the sort of thing whose reputation exceeds the reality. For a lot of folks, that title is EVE Online, a space-based corporate warfare RPG that attracts more curious onlookers than paying subscribers.

Iceland-based CCP Games is well aware that their flagship title has limited mass appeal, and they’ve been trying for years to make EVE happen in a bigger way. Some approaches have involved tweaks to the game itself, or changing its business model to attract new blood to its intimidating, cutthroat world. Other attempts have focused on the fiction underlying EVE — a far-future galactic dystopia that imagines what life would be like in the “Outer Colonies” that something like Blade Runner only hints at. This approach has been embodied in comics and novels, snazzy CG trailers, and in a spin-off title designed to appeal to folks without the time or inclination to dive into a full-fledged MMO.

EVE Valkyrie was that title.

Centered on the fighter pilots of the EVE universe, EVE Valkyrie was a multiplayer spaceship shooter that served as an early poster child for commercial VR and became the best-known, most attractive early demo for the Oculus Rift VR headset. Copies of Valkyrie were even thrown in with every purchase once the hardware was being sold in earnest. It became a similar lighthouse for would-be customers of Sony’s PlayStation VR, offering all comers the fantasy of playing an elite space jockey fighting for cash and thrills on the other end of the universe. And it worked. Attractive graphics and an intuitive, gaze-based approach to missile lock-ons kept the servers buzzing and belayed criticisms regarding lack of depth or the presence of unwelcome microtransactions.

As the VR trend has cooled somewhat, CCP decided to cast their net wider. This is where EVE Valkyrie’s Warzone update comes in. 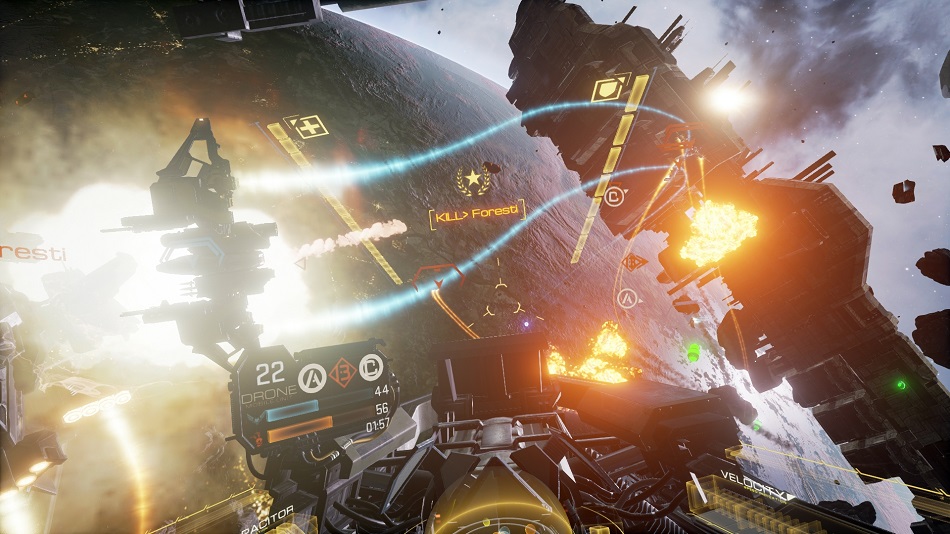 Billed as a soft reboot for Valkyrie, the Warzone update makes it fully playable with or without VR, and also reworks the overall progression system from top to bottom. More importantly, the game now has cross-platform play between PC and PS4, ensuring that matchmaking is painless and quick thanks to having access to the combined population of PSVR, Oculus Rift, and HTC Vive users, plus any that decide to play without a headset.

For what it’s worth, Warzone works perfectly well outside of VR. In standard display, it’s a competent, if somewhat weightless space shooter. The aspects that feel fantastic in VR feel strangely disconnected outside it — somewhat ironic since the benefits of VR eliminate the need for many of the visual and spatial tricks developers pull to give first-person games a sense of weight and impact. Head-bobbing, arbitrary screen-shake, and other cinematic contrivances would only make a headset-wearing player feel sick, so the need to split the difference tends to leave Warzone’s VR-free experience feel somewhat subdued.

That said, the rest of the makeover has gone quite well. Criticism of the original Valkyrie’s structure revolved around a “launch tube” ship selection system, which arbitrarily locked away craft until players could grind enough in-game cash to unlock more slots. That’s been done away with, and players can now select any ship from the get-go. The ships themselves have been rebalanced to emphasize the interplay of distinct roles in combat. Some craft specialize in well-aimed, long-range sniping. Others prefer to get up-close and personal with shotgun cannons and proximity-detonated missiles. Some mount gadgets that can refill a teammate’s energy reserves or shields, and still others can temporarily cloak their presence to line up an ambush.

There’s no doubt the new abilities and new design emphasis help every ship stand out as a viable, worthwhile choice to make. However, in practice, play tends to boil down into a chaotic scrum. Complex team-based play doesn’t feel fully supported by the modes on offer, and the pace and distance of the dogfights prevent the kind of close coordination that one would need in such an experience. Team Fortress in space this will never be.

While gameplay-relevant perks are unlocked through a standard skill tree (and filled by climbing the pilot rankings) cosmetic upgrades like like ship paint schemes and pilot helmets are stashed in loot box-style “reward capsules”, purchasable with both in-game cash and real-world money. For my part, it never felt necessary to spend money, since the cosmetic variances are barely visible thanks to the distance of combat and the dark background of space. In-game cash also comes in at a decent clip, as well as some unlocks being available for piecemeal purchase, separate from the loot box system. Their mere presence in a game that costs money to buy will definitely turn off some players, but they shouldn’t affect the quality of the competition.

Despite papering over some of the cracks that threatened its original incarnation, Warzone doesn’t quite fix the problems of EVE Valkyrie, and its value as a space game will, in some ways, depend on a player’s available hardware. Players who own VR headsets will find the definitive edition of one of the medium’s most accomplished titles, while players without VR will find a competent, fast-paced space shooter that (at least on PlayStation) doesn’t have much in the way of strong competition. Rating: 7.5 out of 10

Disclosures: This game was developed and published by CCP Games and published by Iceberg Interactive. It is currently available on PS4 and PC, and is compatible with VR, including Oculus Rift, PlayStation VR, and HTC Vive. This copy of the game was obtained via publisher and was reviewed on the PS4, with and without using PSVR. Approximately 20 hours of play were devoted to the multiplayer modes. There are no distinct single-player modes.

Parents:  This title’s ratings information was not available from the ESRB at the time of review. Based on the content experienced in the game, it would likely warrant a rating of E10+, and contain descriptors of Fantasy Violence. Characters in the game are represented by spaceships, and combat takes place entirely between varying types of vehicles.

Deaf & Hard of Hearing: The game features subtitles in English. There are no audio cues necessary for successful gameplay, though playing with positional audio or a VR headset can provide advantages in terms of spatial awareness.

Colorblind Modes: There are multiple colorblind modes in the game.