The Only Good Bug… 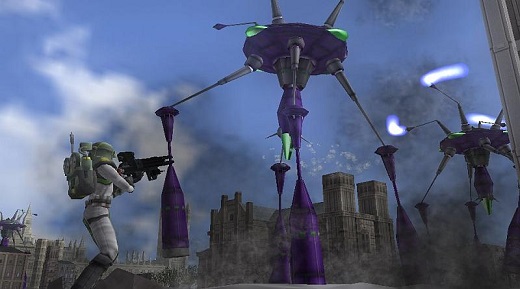 LOW Aiming weapons in midair with the Pale Wing

WTF The Pale Wing's movement on the ground

The Earth Defense Force series is the definition of ‘cult hit'.

Originally born under D3's budget-priced "Simple Series" banner, developer Sandlot turned the game's obvious rough edges into selling points, overcoming awkwardness with confident pluck that hooked many a player's heart. It would go on to spawn multiple sequels, spin-offs, and updated rereleases, all of them flying in the face of conventional design wisdom and being loved for it.

Earth Defense Force 2: Invaders From Planet Space for the Vita is even more of a blast from the past than usual. By custom, these titles have always been of an earlier, less elegant era of design, but the case is more literal here. It's actually an enhanced port of Global Defense Force, the second game in the series, which never made it out of Japan apart from a quiet, years-delayed European release on PS2.

Re-releasing a decade-old game that was maybe too retro even when it was new may seem to be a bad idea, but Invaders From Planet Space is actually one of the most engaging entries in the series, and that's saying a lot for a franchise built on the corpses of thousands of gigantic dead bugs.

Indeed, just like every other major EDF release, players will pick a soldier, pick a weapon, and be dropped with little ceremony into a mission to shoot, shoot, and shoot until everything is a smoking ruin. The main source of variation is in the choice of armament. Weapons come by the dozen and range from standard guns and missile launchers to exotic lasers, grenade launchers, and other equipment.

The EDF's finest themselves come in three flavors: The classic Infantry, specializing in the orthodox pantheon of rifles, shotguns, and rocket launchers. There's also the jetpack-equipped Pale Wing, whose grace in the air and powerful energy weapons are offset by ungainly ground movement and low health.

The third class is the Air Raider, imported from Earth Defense Force 2025. As a support-oriented class, the Air Raider provides the most unusual style of play, as his arsenal of mine launchers, remote-controlled turrets, and powerful air strikes encourages caution and avoidance in a way unprecedented for the other two, which are more "point-and-shoot" in philosophy. Unfortunately for the poor Air Raider, this translates to a poor solo experience, since cautious play is boring and difficult without backup to hold the line.

Speaking of backup, this should be where multiplayer comes in, but alas, I was unable to ever join a match successfully. Other issues like occasional framerate drops in hectic situations cropped up, as did the strange tendency of the Pale Wing's projectile weapons to go awry when fired in mid-flight. Otherwise, the game's technical chops are solid.

Thankfully, Invaders From Planet Space is perfectly satisfactory for solo players. Missions are short and eventful, rarely taking more than a few minutes to finish and perfectly suited to the Vita's portable format. The load times are quick, and shooting giant ants, spiders, UFOs, War of the Worlds-esque alien striders, and even Godzilla knock-offs provides variety where the basic game mechanics don't. Selectable difficulty settings can adjust the challenge up or down to suit a player's preferences, with more new and better weapons dropping on the tougher ratings.

It all sounds great on paper, but the one catch here is that a player's enjoyment of Earth Defense Force 2: Invaders From Planet Space will largely depend on their mindset. It's hard to beat blasting aliens on a commute, but its long-term prospects demand a tolerance for repetition that the game's charming awkwardness might not overcome. Rating: 6 out of 10


Disclosures: This game was obtained via the publisher and reviewed on the PS Vita. Approximately 10 hours of play were devoted to the single-player mode, and the campaign was completed. Due to connection issues, online multiplayer was not tested.

Parents: According to the ESRB, this game contains animated blood, mild language, and violence. Players will combat realistically-rendered giant enemies, including ants and other insects that move erratically and come close to the screen. Death effects include light splashes of blood and exaggerated screaming.

Deaf & Hard of Hearing: The game includes no subtitle options for written or spoken dialog, and though most missions are simple enough to complete without needing to hear instructions, much of the flavor of the game will be lost on players unable to perceive background dialog or exposition.