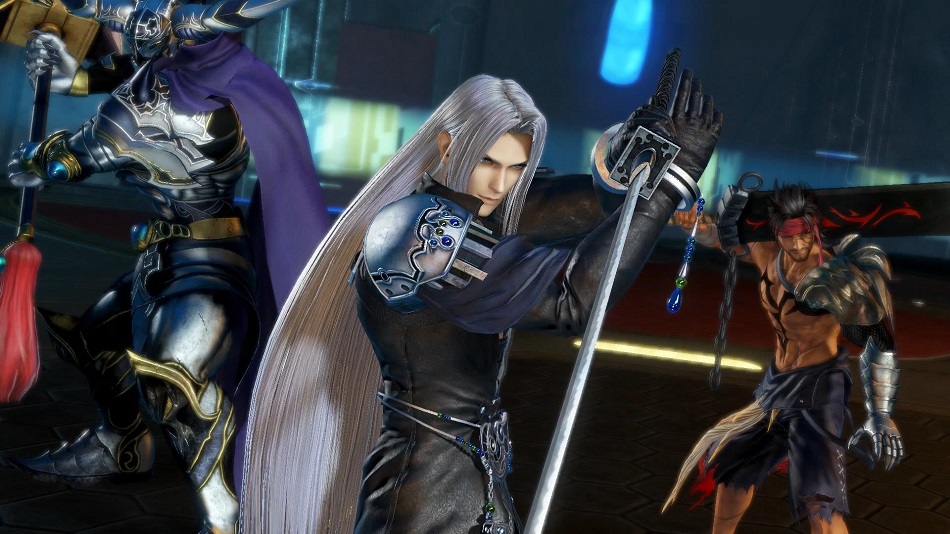 WTF Why is the Cup Noodle DLC the Royal Raiment for Noctis and *not* his Cup Noodle helmet?!

Only a fool would underestimate the power of nostalgia when it comes to a person’s enjoyment of a given work. I know this because if Dissidia Final Fantasy NT were based on any brand other than Final Fantasy, I’d have run away from it, screaming. However, persistence pays off and a few hours of struggle will unearth a deep, complex, unconventional fighting game buried beneath a mountain of deliberately-obtuse presentation. Honestly, this mind-boggling experience is analogous to being chucked out of a plane with a sewing kit and being tasked with assembling a parachute in freefall.

The hook, at least, is simple. Twenty-eight characters from every numbered Final Fantasy (as well as fan favorites Final Fantasy Tactics and Final Fantasy Type-0) have convened at the behest of two deities to fight each other for the fate of the multiverse. The imported characters run the gamut from iconic (FFVII‘s Cloud Strife and FFX‘s Tidus) to the slightly obscure (FFXI‘s Shantotto and FFXIV‘s Y’shtola), and none have any qualms about beating the snot out of each other for glory and Gil (that’s Final Fantasy money for the uninitiated). So far, so Naruto.

The trouble starts when trying to get a grip on the gameplay, which is a port of the arcade release of the same name.

Previously exclusive to Japan’s arcade scene, Dissidia NT continues in the mold of the two previous, PSP-based Dissidia titles. Similar to the Naruto: Ultimate Ninja Storm series, Power Stone, or other predecessors, Dissidia NT is an arena-based fighter that gives its combatants free movement around a small space and while letting them execute moves in three dimensions. 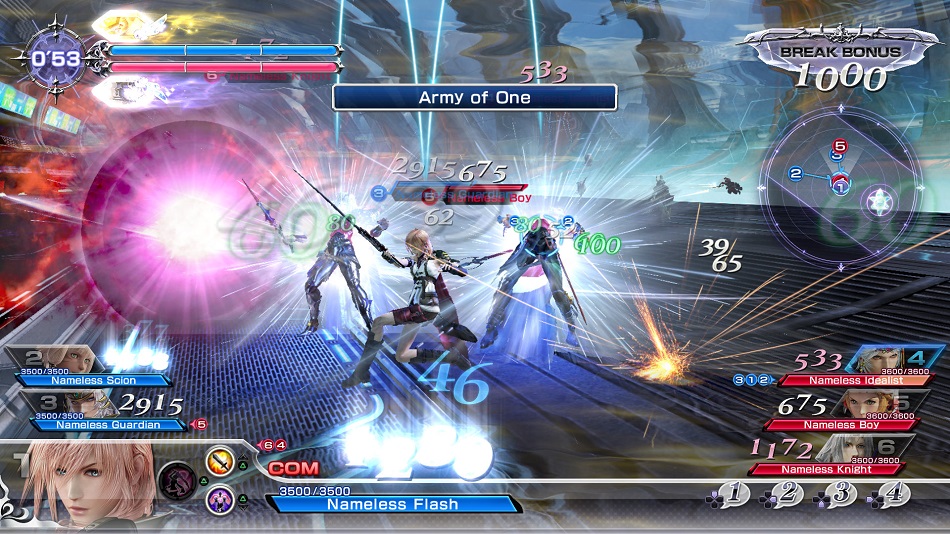 There’s less verticality here than in the previous titles, which actually works in its favor considering the other twist — an expansion of scale to two teams of three fighters battling it out simultaneously. Not being as high-flying as the original iterations means managing the action isn’t impossible, but there’s still plenty of aerial acrobatics to be had thanks to copious dashing and double-jumps available to every character, and more than a few attacks are designed to home in on a dodging enemy.

On the other hand, having six players on the field simultaneously results in an incredibly chaotic fighting experience. The sheer amount of things to keep track of is utterly overwhelming at first, and at times the volume of visual noise in Dissidia NT makes Marvel vs. Capcom look like a stately dueling club. However, with practice and mastery of the helpful-but-finicky targeting controls, practiced players can stage their own reenactments of Advent Children‘s hectic, fast-paced attacks.

Speaking of attacks, Dissidia NT‘s signature mechanic is a hybridization of the RPG mechanics Final Fantasy is famous for, combined with a fighting game-like emphasis on timing and spacing.

Players manage two main resources in battle — Bravery and HP. Bravery shields a player’s character and also determines how much damage they can do. It can be filled by attacking other players with fast, accurate Bravery attacks, and it can be lost by taking damage from any source. HP acts as a core health attribute, and can only be drained when another player lands a powerful HP attack.

The typical rhythm of combat consists of lowering opponents’ Bravery while building up one’s own stock, then cashing that stock out with a devastating HP coup de grâce. Draining a character of their current Bravery by using HP attacks is a smart move, and makes Dissidia NT’s combat a constant push and pull of players weaving in and out looking for the perfect opportunity to end their foe. Throw in complications like summoning huge beasts such as Shiva and Ramuh to mix things up along with EX abilities tailored after each character’s unique skills, and there’s a lot to chew on. 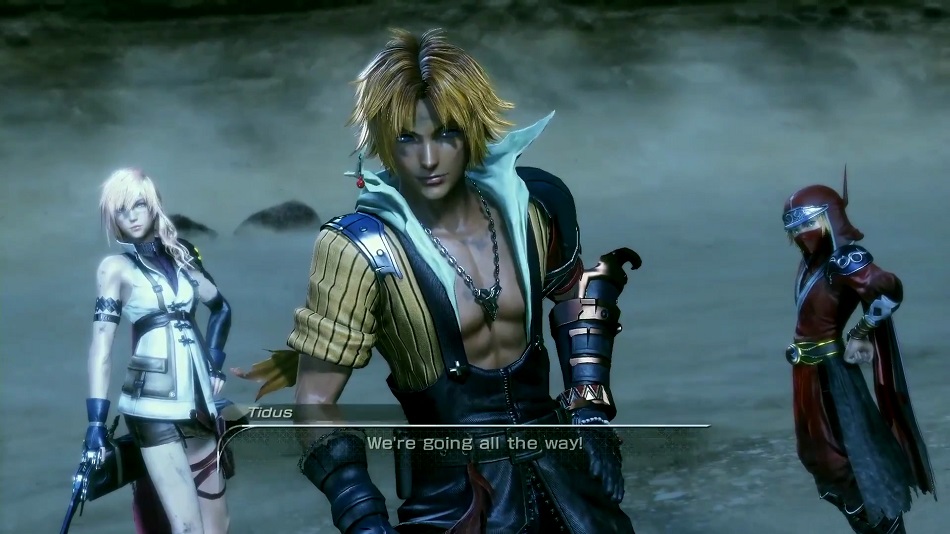 Stakes are also raised during any match by the need for coordinated team play. It’s easy for two players to gang up on a third, and once a team suffers three KO’s, the battle is lost. The complexity of the mechanics combined with the amount happening onscreen can induce a kind of tunnel vision, and this lack of battlefield awareness can be deadly to a team that wants to compete.

…If only competing were easier. My geographic location isn’t usually great for online multi, but Dissidia NT‘s matchmaking is as slow as molasses, a fact confirmed by my conversations with other journalists and, after release, other players — it was common to wait several minutes to find a match, even during peak hours for both my region and others. Unfortunately, without multiplayer Dissidia NT‘s content is rather sparse. Even the “Story Mode” requires use of the multi or training modes to earn “Memoria” items that unlock cutscenes and narrative encounters.

Not that the encounters make much sense, though. Dissidia NT is bare-bones as can be when it comes to the kind of story content that Final Fantasy is known for, and the best writing is actually less in the cutscenes and more in the endearing, fanservice-heavy interactions between characters. There’s also much charm in little callbacks, like a stage of blooming flowers pulled straight from the famous CGI intro movie for Final Fantasy VIII. Recent announcements about things like Final Fantasy Tactics‘ Orbonne Monastery coming as a future level makes me wish the game were easier for people to love, and thus easier to share with my fellow Tactics fans.

Nostalgia aside, the ancillary content is as unimpressive as the story. Each character has a few palette swaps and costumes available, and these, along with accoutrements like profile decorations or extra tracks from the excellent soundtrack can be unlocked for Gil earned in battles. Loot box-like “Treasures” also award random assortments of cosmetic goodies. Thankfully, the Treasures can’t be bought for actual money, heading off concerns about microtransaction creep. Further characters are promised in upcoming DLC and will eventually bring the roster to around thirty-four.

When Dissidia Final Fantasy NT is firing on all cylinders, it’s a unique experience that sings the glory of its intricate, slightly-too-complicated combat system. It’s just a shame that the spare nature of its arcade origins and the indifferent effort put into teaching its systems will stymie players who aren’t enthralled enough with the Final Fantasy brand to stick it out. Rating: 6.5 out of 10

Disclosures: This game is developed by Team Ninja and published by Square Enix. It is currently available on PS4. This copy of the game was obtained via publisher and reviewed on the PS4. Approximately 20 hours of play were devoted to the single- and multiplayer modes. As a fighter, the game cannot be ‘completed’ in the usual sense.

Parents: According to the ESRB, this game is rated T, and contains content descriptors for Mild Language, Partial Nudity, and Violence.  The official description is as follows: This is a fighting game in which players compete with characters from the Final Fantasy universe. From a third-person perspective, players engage in three-on-three melee combat inside arenas. Players use weapon attacks and magic spells (e.g., elemental strikes, arcane blasts, summoned creatures) to drain opponents’ health/life meters in frenetic combat. Battles are accompanied by explosions, light effects, and cries of pain. A handful of female characters wear revealing outfits that barely cover their breasts and/or buttocks; one creature appears to be nude—though her glowing skin obscures any discernible details (i.e., nipples, genitalia). The word “bastard” appears in the game.

Deaf & Hard of Hearing Gamers:  All dialogue is subtitled. No audio cues are required for play. It’s fully accessible.