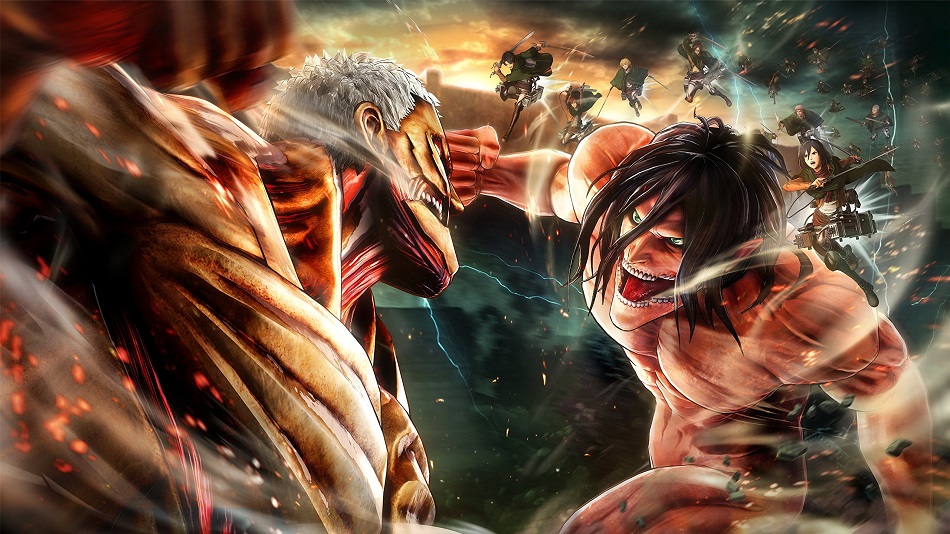 HIGH The same great hook as before, working better than it ever has.

WTF I was Attack on Titan‘s hero all along! Who knew?!

Like the blockbuster manga and anime series it was based on, 2016’s Attack on Titan: Wings of Freedom ended up being quite a bit better than anyone expected. At the same time, Dynasty Warriors developer Omega Force proved they were good for more than musou. Two years later, they’re back to prove that their design is still fresh enough to warrant a sequel.

More than a century ago, humanity was driven to the brink of extinction by the Titans — a race of giant, practically immortal cannibals. What remained of mankind found shelter in a nation surrounded by three massive circular walls, and the peace lasted until the outermost wall was breached. As a soldier in the military, main character Eren and others master the series’ signature anti-titan fighting style featuring pneumatic grappling hooks and twin swords to swing and careen around the environment like anime Spider-Men.

Fans of the series will find this story familiar, as Attack on Titan 2‘s campaign moves more or less in lockstep with the two extant seasons of the anime adaptation. Unfortunately for those fans, especially those who played Wings of Freedom, a ton of content has been recycled.

Players will once again learn the controls training under drill sergeant Shadis, compete with their fellow squaddies in a mock titan hunt, defend and retake the city of Trost from the Colossal Titan’s second appearance, and basically go over every episode in sequence. Genuinely new story content doesn’t even begin showing up in the campaign until the plot starts to cover the second anime season. The plot’s revelations will come as a surprise to those who haven’t seen said season or read far enough in the manga, but even so, the level of recycled content would border on being intolerable if not for Attack on Titan 2‘s big twist — seeing this content from the perspective of a customizable avatar. 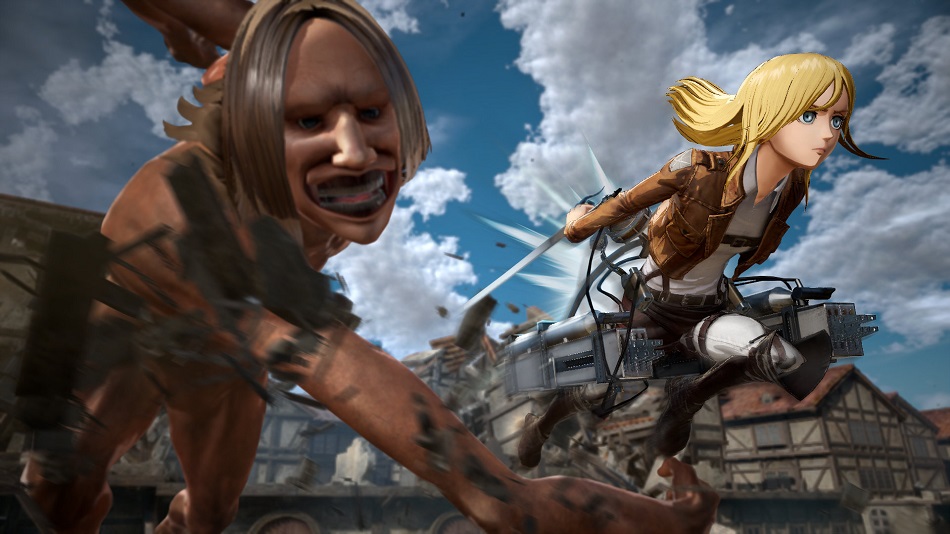 Cast as a citizen orphaned in the same titan invasion that set off the events of the plot, the player’s character is inspired to join the army and ends up a classmate of Eren’s. In some ways, the story unravels like an Attack on Titan version of Forrest Gump by featuring someone on the peripheral edges of history who’s never prominent enough to be noticed.

Paradoxically, centering the story around the player’s character (referred to as “our man” regardless of gender) is both meaningful in some ways and irrelevant in others, but truthfully, the appeal of again experiencing key events in the Attack on Titan story from a different perspective is limited. The canon characters are so central to every major plot point that anyone not them does little of consequence. As a result, major cutscenes still replicate the anime almost beat-for-beat, occasionally cutting to brief first-person vignettes to signify the player’s presence somewhere nearby.

On the other hand, loosening of the canon to accommodate the player allows for a level of freedom that the core characters would never have for plot reasons. As such, the world of Attack on Titan feels bigger and more alive. Key to this is the addition of a Persona-esque system of relationship-building which enables players to form bonds and interact with dozens of characters from the manga and anime. These faces flesh themselves out in the margins of the main story, whereas in the manga and anime they barely get any time or just die unceremoniously.

Beyond the new friendship systems and the adjusted narrative, little else has changed substantially with regard to the core mechanics. However, that’s a good thing since those mechanics are what helped Wings of Freedom capture the feel of Attack on Titan and its unique approach to combat. 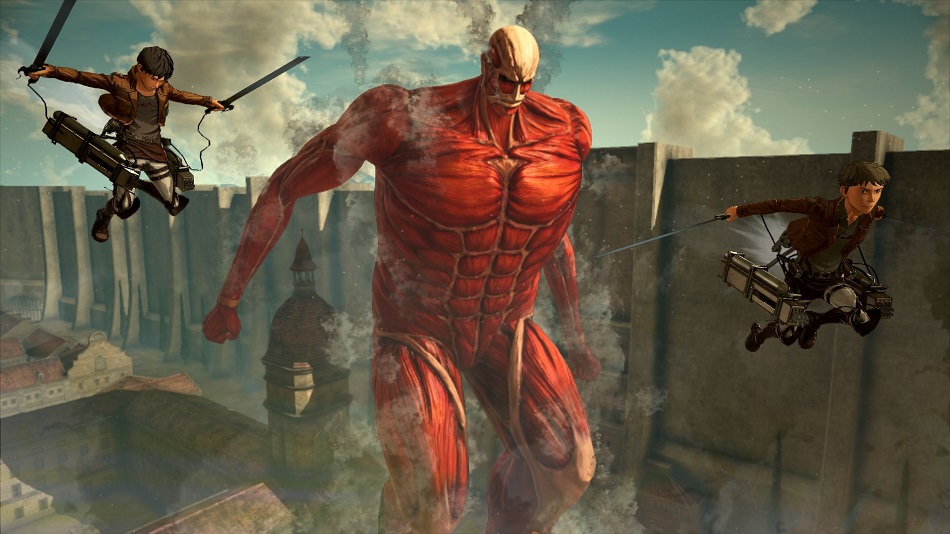 As before, players use their “Omnidirectional Movement Gear” (OMD) to swing about the environment, targeting Titans and hooking onto them, then maneuvering around their defenses to target their weak spots. Other bits of the Titans can be targeted to make the job easier, like cutting off their legs to keep them from running or cutting off their arms to prevent them grabbing allies or escort targets. It’s quite fiddly at first, as traditional action game control schemes don’t really apply, but it soon becomes second nature. Tactical considerations are added by the player’s need to manage their OMD Gear’s propulsive gas supply, as well as replacement blades and other supplies. One wouldn’t think it at first, but much of Attack on Titan 2‘s challenge revolves around balancing speed and resources.

Despite the differing mechanics, this is where things will feel familiar to Warriors aficionados as the mission structure places a Warriors-like emphasis on “firefighting” — essentially, it forces players to juggle priorities as they jet between various distress signals popping up across the map while keeping an eye on the main objectives. Clearing out trouble spots without depleting resources can be a real challenge at higher difficulty levels. There’s also the ability to craft better items and build “base” structures at pre-selected points on the map. The bases range in function from defense towers that whittle down nearby titans’ health to supply towers that refill a player’s blades, gas, and special gadgets.

While the side-systems ensure that Attack on Titan 2 can be engaging for players willing to put in the time, the core mechanics just aren’t deep enough on their own to merit the kind of time investment needed to unlock everything. Once mastered, titan combat gets a bit samey, and better gear only makes combat go faster. Then again, this pitfall is a common woe for action games that try for an RPG-like progression system, so this sin is hardly Attack on Titan 2‘s alone.

Ultimately, there’s no argument that this is the best game adaptation the franchise has seen, and it’s an undeniable improvement over its predecessor. However, the amount of rehashed material might be galling to players who want new content — those who’ll be happy with simply killing titans in a more polished fashion are the ideal audience here. Rating: 7 out of 10

Disclosures: This game is developed by Omega Force and published by Koei Tecmo America. It is currently available on PS4, Xbox One, Nintendo Switch, and PC. This copy of the game was obtained via publisher and reviewed on the PS4. Approximately 24 hours of play were devoted to the single- and multiplayer modes. The game was completed.

Parents: According to the ESRB, this game is rated M, and contains content descriptors for Blood and Gore, Language, Partial Nudity, Violence. The official description is as follows: As characters fly around battlefields with wired jetpacks, they use swords to cut off titans’ limbs, killing them with a slash at the back of the neck. Battles are highlighted by large splashes of blood when titans are hit; finishing blows often result in larger blood-splatter effects, staining the environment and the camera. Titans are sometimes depicted eating human characters, and in one instance, biting off a character’s limb. Throughout the game, Titans are depicted nude, with exposed buttocks, though they lack discernible genitalia. The word “sh*t” appears in the dialogue.

Deaf & Hard of Hearing Gamers: All dialogue is subtitled. No audio cues are required for play. It’s fully accessible.