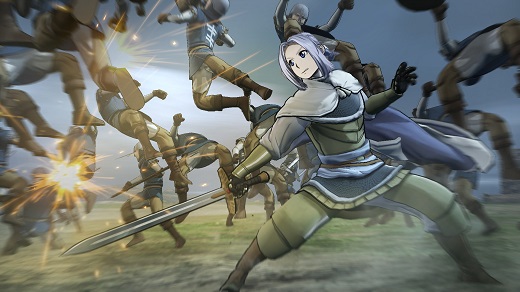 HIGH Surprisingly enough for a Warriors game, the story…

LOW …that ends halfway through.

WTF A naïve young prince with a kill count in the tens of thousands?!

It's no longer surprising to me when Tecmo Koei applies its famous Warriors formula to an unexpected brand.  Through dozens of releases and across properties ranging from European history to Nintendo's Zelda, all the way to the sci-fi mecha of Gundam, the design has proven one of the most resilient in all of gaming. It's practically a genre unto itself.

Strangely enough, this focus on slaughtering nameless, dimwitted enemies by the thousands holds its appeal even when married to something seemingly incongruous like The Heroic Legend of Arslan, the 2015 anime inspiration for Arslan: The Warriors of Legend. Based on a long-running series of novels by author Yoshiki Tanaka (who in turn took inspiration from the Persian epic Amir Arsalan) this tale is a sober, complex story of operatic drama that takes war and violence quite seriously.

It might seem that a game transforming its characters into near-demigods capable of leveling crowds of men with minimal effort would be incompatible with a story this nuanced, but it all works, and on multiple levels, to boot.

Fans seeking a substantial narrative will find a meaty, involving tale which draws from the strength of the source material.

Set in the Persia-esque fantasy empire of Pars, the main campaign follows young prince Arslan as he struggles to regain his kingdom, toppled by the quasi-Crusaders of the Lusitanian Kingdom. Told in a mix of in-game cut-scenes and partially-animated stills from the anime, the story plays it straight. It comes across as earnest and heartfelt when compared to Dynasty Warriors's well-trodden perversion of the Romance of the Three Kingdoms, and much more complex than the cross-dimensional antics used to justify the likes of Hyrule Warriors and Dynasty Warriors: Gundam.

As for existing fans of the Warriors gameplay formula, Arslan is lean and accessible, recalling older Omega Force games by lacking some the busywork and feature bloat introduced over the years. Leveraging a smaller cast of a "mere" two dozen or so, Arslan: The Warriors of Legend makes most of these characters by making them play differently from each other, even while incorporating the weapon-switching mechanic from other franchise entries.

Where most characters in Dynasty Warriors 7 display a near-identical set of attacks based on their equipped weapon, callow Arslan and heroic Daryun wield their respective spears and swords in very different ways. Attack patterns diverge even further as more outlandish fighters join the roster. My favorites include the travelling bard Gieve, whose rocking lute solos send enemies flying, and tactician-cum-painter Narsus, whose masterpieces are so incomprehensible they literally explode his foes' minds. Obviously, this runs counter to the realism of the central narrative, but flourishes like that underscore Arslan's playful spirit and appreciation of the source.

That appreciation extends to the visuals. While the landscape detail and character models are on par with the previous console generation, the PS4's framerate is uniformly smooth, using the additional power of the platform used to boost the enemy count. The game also replicates some of the anime series's scale by implementing the "Mardan Rush" attack—a massed beatdown involving thousands of soldiers controlled at once by the player and giving the impression of a crowd of medieval Pikmin on a murderous rampage.

Ultimately, what might bring down Arslan: The Warriors of Legend in the eyes of some isn't any single aspect, but the fact that in spite of everything, it is—and remains—a Warriors game, with all the attendant baggage and stigma that comes with it. Open-minded fans and the already-converted will be satisfied, but those hoping for more of a departure from tradition won't find it here. Rating: 7.0 out of 10


Disclosures: This game was obtained via publisher and reviewed on the PS4.

Deaf & Hard of Hearing: Voiceovers are in Japanese only, with English subtitles. All dialog, objective, and story information is subtitled or shown on screen via "talking heads", though some combat quotes are not subtitled.

Colorblind Modes: There are no colorblind modes available in the options. In the game interface, blue denotes friendly forces, while enemies are marked in red.