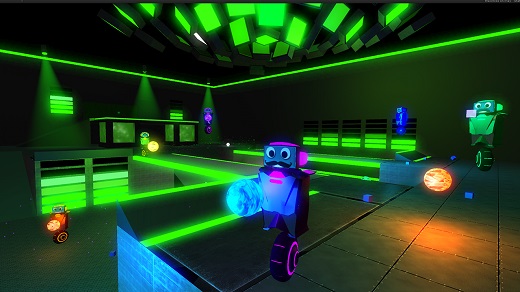 WTF I'd love to sit back and play with a controller, but it just doesn't work.

When a game has a name like Robot Roller-Derby Disco Dodgeball, it's not quite clear what to expect. Fortunately, the game isn't nearly as complex as its title would suggest.

Disco Dodgeball puts players in control of an agile single-wheeled robot. These robots face off against opponents in Tron-inspired arenas with various ramps, platforms, and other obstacles. Balls are placed all around for players and computer-controlled opponents to pelt each other with.

If that sounds like a traditional game of dodgeball, that's because it pretty much is. However, while there have been a handful of video games over the years that have tried to simulate the classic playground game, none have come quite as close as Disco Dodgeball. All the expected rules and features are represented, including the ability to block an incoming projectile with a ball and rebound it back at the enemy for an elimination.

Despite the similarities to the real-world sport, Disco Dodgeball takes advantage of its electronic nature and adds decidedly unreal features. The robots have the ability to sprint extraordinarily fast, leap unnaturally high, and pick up various power-ups to enhance their abilities. There are shields, upgraded balls, and more to help level the opposition.

The game's controls are not immediately intuitive, but the tutorial did a great job of teaching me how to manage movement, momentum, and throwing. Once I got the hang of the basics, I started moving on to higher-level maneuvers. Eventually I was sprinting, jumping, and braking like a pro. My biggest gripe with the controls is that the gamepad aiming was finicky and inaccurate, even though the game advertises full controller support on its Steam page.

After mastering Disco Dodgeball's controls, I dove right into the game proper. The main single-player mode is an arcade-style score chase where the goal is to single-handedly defeat waves of enemy robots. As players climb the ranks, they'll face tougher enemies and larger waves. Fortunately, additional power-ups are unlocked to help deal with the onslaught of deadlier and deadlier opponents. In this one-versus-many mode, the difficulty can be grueling. With only three lives at my disposal, I never made it too far up the ladder, and it's hard to recommend spending too much time in the single-player mode because online multiplayer is where Disco Dodgeball really shines.

The game's fast-paced, frenetic action translates well to an arena-style combat scenario, and the addition of team play makes Disco Dodgeball even more like the real thing. There are several modes available, from a classic elimination style to a trick shot battle. While the challenge of mastering the controls is still important in online play, the addition of teammates makes the game a little more forgiving.

Perhaps the most appealing part of the multiplayer mode is its super-fast pick-up-and-play nature. Simply hit the "Quick Match" button to be dropped into an ongoing match featuring a mix of live players and bots. It only takes a few seconds from the time the game boots to playing a frantic match of robot dodgeball. If there aren't enough real players available, Disco Dodgeball automatically fills the server with bots and replaces them as humans join. It's all totally seamless. And since the team-based modes are significantly more exciting than playing alone, I would recommend this as the default for most players.

It's hard to fault the developers for not including a split-screen multiplayer mode, but that might have sent Disco Dodgeball over the edge of recommendation for me. While the fast-paced action of all-out dodgeball combat is consistently enjoyable, it would be even better with friends in the room. Among games like Towerfall and #IDARB leading the the current Renaissance of couch games, Disco Dodgeball could be great. Instead, it's merely good. Rating: 7 out of 10

Parents: Robot Roller-Derby Disco Dodgeball has not been rated by the ESRB, but I would expect a rating of E. The game contains a simulated version of dodgeball played with non-humanoid robots and features no realistic violence, blood, or gore. The online multiplayer mode allows players to text chat with each other.

Deaf & Hard of Hearing: The game features no dialogue that need subtitles, and the game is fully playable with no sound. Audio cues might make gameplay a touch easier, but this is primarily a visual game. 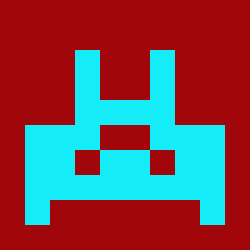