"I Can't Physically Throw Up in My Mouth…" 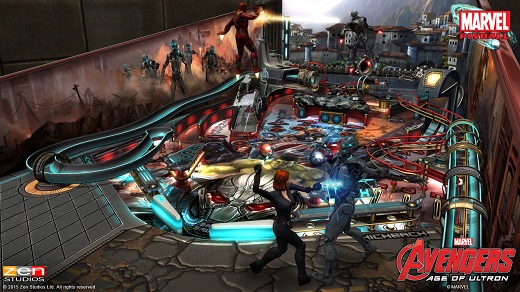 HIGH Launching the ball from a Hulkbuster gauntlet.

WTF Why is a pinball table based on a summer blockbuster so boring to play?

The Zen Pinball games have made a lucrative business of licensing iconic geek franchises and offering gamers a pay-per-table business model. Zen Pinball has had a long relationship with Marvel and has developed tables based on intellectual property such as Spider-Man, Captain America, and more recently, Guardians of the Galaxy, just to name a few. Zen's newest Marvel board, Avengers: Age of Ultron (AOU), coincided with the launch of one of this summer's biggest blockbuster films.

A caveat: I am not a pinball connoisseur. Rather, I judge pinball tables based on a number of admittedly esoteric criteria. Does it feel good? Does it produce suitably rhythmic play? How complex is the architecture and design of the table? What are its aesthetic qualities, if any? For most of these questions, the AOU table does not provide satisfactory answers.

Like other Zen Marvel pinball tables, the AOU board features a prelude section where players must juggle multiple balls as expositional, out-of-context dialogue plays in the background. Although players are able to skip them, these sections have always struck me as odd. They begin the game with an awkward dynamic of trying to keep two balls in play at once—not the normal pinball situation—and appear to be included for narrative reasons only: a strange decision for pinball, which is not a narrative-driven experience.

Like other Marvel-themed boards, the AOU table's aesthetic borrows heavily from the film on which it is based. The ball launches from a Hulkbuster gauntlet, the fictional Eastern European country of Sokovia acts as the background setting, and Iron Man and Black Widow adorn the outskirts of the table. The playfield itself is rather unremarkable. As per usual, there are a number of lanes present, each representing a different Avenger, such as Captain America or Hawkeye, and a center hole, normally blocked by bumpers, representing Thor. Players can activate "missions" by performing the right actions, such as hitting the proper number of bumpers or sending the ball through a particular character's lane a requisite number of times.

Despite being serviceable, the table is ultimately a disappointment—it’s just not as dynamic as it could or should be, especially when compared to other Zen Marvel tables. The excellent Infinity Gauntlet table easily outshines this one, for example. Moreover, while the designers strive for aural verisimilitude with the blockbuster film, the generic actors that perform the game's bits of dialogue sound very little like their big screen counterparts. The poor execution of the voices makes the table feel like a knockoff rather than the officially licensed tie-in that it is.

Fans of the blockbuster might enjoy the set dressing applied to this pinball table, but those looking for a solid pinball board underneath the veneer might be left wanting. Rating: 5 out of 10


Disclosures:This game was obtained via publisher and reviewed on the PS4. Approximately 1 hour of play was devoted to single-player modes.

Parents: According to the ESRB, this game contains fantasy violence and mild language. Based on my play time, the violence is incredibly mild, and I did not notice any mild language. Very suitable for all ages.

Deaf & Hard of Hearing: Sound is not necessary to enjoy the game.