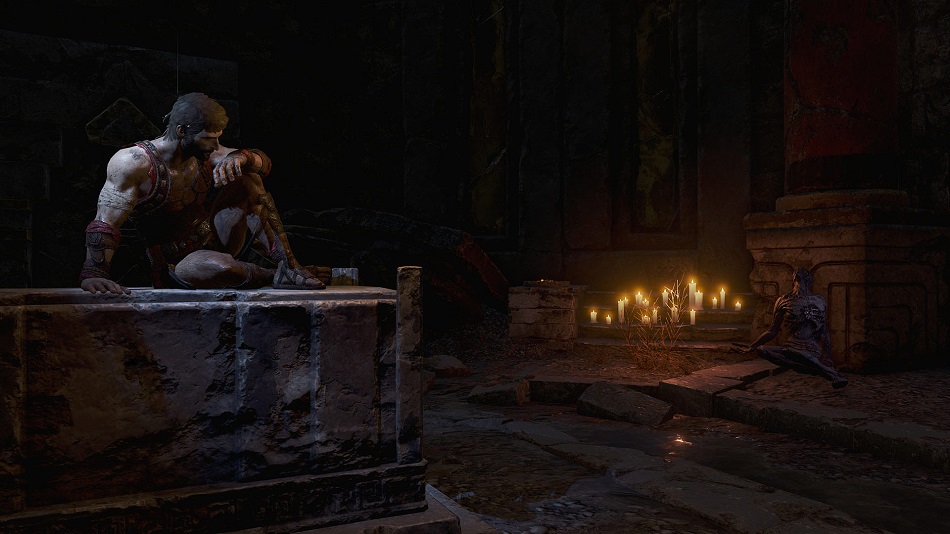 HIGH An excellent gloomy atmosphere in the labyrinth.

LOW Instant deaths around every corner.

WTF The underdeveloped twist ending comes out of nowhere.

Theseus is third-person PSVR action-adventure game that reimagines the Greek myth of Theseus — the man who entered the Labyrinth and slayed the dreaded Minotaur.

In this iteration, Theseus’s love Ariadne is trapped in the center of the maze. Players are tasked with rescuing her while avoiding the bullish beast that haunts the twisted, nightmarish structure. While perhaps one of the most visually stunning games available for PSVR so far, Theseus suffers from an incredibly short journey, clunky mechanics, and frustrating instant deaths.

The game begins with the hero wading through a shallow lake of blood-red water toward giant, slightly ajar double doors. The screen then goes black and they awake atop a cold stone slab, already lost within the Minotaur’s labyrinth. As they explore the byzantine ruins, the spirit of Ariadne greets players and becomes a guiding light through the maze.

It’s not until players die for the first time that they realize Theseus has been caught in some kind of time loop. He’s forced to return to life again and again within the maze until he can reach its center. It’s a compelling premise that fits into the established videogame logic of repetition and failure. Unfortunately, like many story aspects here, it’s never explained or fleshed out — it’s just delivered matter-of-factly and players are expected to accept it.

Rather than the first-person perspective common in virtual reality games, Theseus instead turns players into the in-game camera. From this position (either locked behind Theseus’s shoulder or positioned in the corner of the room) players can look around the environment and control the hero. 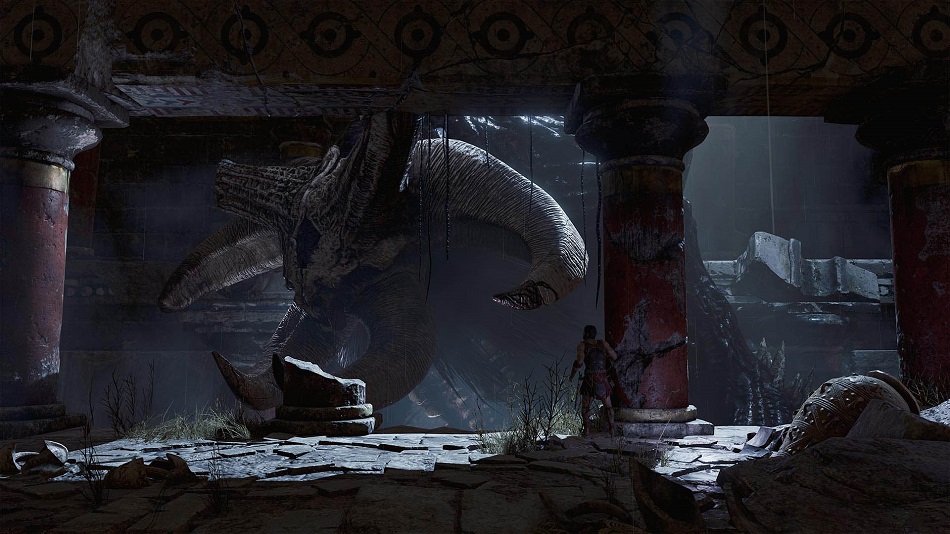 Despite not seeing through Theseus’ eyes, players will still feel firmly immersed in the beautifully decaying world. The camera automatically switches to a new cinematic perspective when moving from one room to another, not unlike classic Resident Evil titles. It’s a design choice that works here, even if I kept wondering how much more immersive the game might have felt if the camera was fixed to an over-the-shoulder perspective.

Moving around the environment is relatively painless, but simple things like running and climbing feel unnecessarily clunky. The animation is a little jerky, as if missing frames, and I never felt like I had full control of Theseus. Instead, it felt like I was pressing a button and waiting for the character model to perform the appropriate action.

This same disconnection is mirrored in the abysmal combat system, which involves mashing buttons to either swing a sword or torch. While thankfully kept to a minimum, players are forced into boring bouts with spider-like creatures several times over the course of this 90-minute game. Because of the simplistic nature of the combat, battling these creatures feels like busywork, implemented just to squeeze a few more moments out of the anemic length.

Another way the developers have tried to extend playtime is by instantly and routinely killing players. There’s a section early on, for instance, where players have to swing their torch wildly to ward off the spider-like offspring of the Minotaur. If players hesitate, get too close to the darkness, or accidently walk under water that extinguishes their torch, the spiders rush Theseus and quickly tear him apart. Likewise, there’s a section that involves sneaking past the Minotaur, burning away rot that covers a doorway, and activating a switch. It’s an excruciatingly frustrating sequence since the monster can swipe his massive paw across the screen quickly, leading to another instant death. While the game has generous save points, it doesn’t lessen the sting of this lazy trial-and-error gameplay.

Despite its shortcomings, however, Theseus provides a visually arresting world to explore. In VR, players will marvel at the decrepit corridors, foliage creeping up through cracked stone, the water dripping down from mossy rock, deep shadows, and dynamic lighting effects produced by the torch Theseus carries for much of his journey. The Minotaur itself towers over players, grotesquely covered in boils, with a gaping maw where its chest should be. The character designers and artists deserve credit for creating a monstrous adversary that will frighten, if not irritate, players throughout their journey.

Theseus provides a stunning, atmospheric world to ogle in virtual reality that ends too soon, all the while mired by clunky controls and instant deaths along the way. Although based on Greek myth, Theseus proves to be far from mythic. Rating: 6.5 out of 10

Disclosures: This game is developed and published by Reply Forge. It is currently available for PSVR. This copy of the game was obtained via publisher and reviewed on the PSVR using a PS4 Pro. Approximately 1.5 hours of play were devoted to the single-player mode, and the game was completed. The game has no multiplayer modes.

Parents: According to the ESRB, this game is rated T for for blood and violence. The game features corpses, blood from spider creatures, sword fighting with spider creatures, impalement, and bodies being crushed. None of it is strikingly graphic, however.

Deaf & Hard of Hearing Gamers: The game features onscreen subtitles set on as default, and there are no significant auditory cues.