Going Through the Motions, Machete in Hand 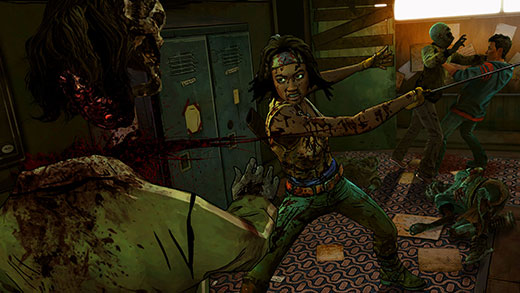 HIGH The episode ends on a tense cliffhanger.

LOW Missing a button in a QTE and doing a long sequence over again.

WTF Zombies in the water? Isn't there some kind of rule about that?

After spending two seasons getting to know Lee Everett and Clementine, it's disconcerting to start the latest Walking Dead as yet another character in yet another set of circumstances. Of course, it helps that the new character is Michonne, the sword-wielding, post-apocalyptic warrior familiar to longtime fans of The Walking Dead comics and TV show. Sadly, the first episode of Michonne does little to differentiate itself from previous installments in the series.

For those unfamiliar with Telltale games, they're essentially vessels to convey provocative and stirring interactive narrative. In fact, the first two seasons of Telltale's The Walking Dead series arguably represent some of the most captivating storytelling in the modern era of gaming.

Michonne continues this design trend, sacrificing complex interactivity for simple mechanics like walking through static environments and choosing between pivotal choices that shift the story sharply or introduce new narrative obstacles. In other words, the joy of Telltale games (Michonne included) is found in the story, characters, and decision-making—not the interaction with the game's world. The issue here is that this story-based joy is repeatedly tempered by feelings of déjà vu.

A caveat: I'm not familiar enough with Michonne from the comics or TV show to have much context for her backstory. So, going into this episode, I grew to know her solely through the information the game provides.

Unfortunately, her backstory and context—at least in the first episode—is partial, somewhat clichéd, and not entirely engaging. We learn Michonne had children and she may or may not be responsible for their deaths. We also learn she contemplated suicide before joining a group of survivors who eventually find themselves scraping by on a boat off the coast.

Without venturing further into spoiler territory, Michonne and a companion are quickly separated from their main group before players have a chance to get to know any of the other characters. In this sense, the episode is more concerned with pushing players toward dire circumstances and the typical set of corrupt human antagonists than providing a rounded portrait of Michonne's initial group. It's a missed opportunity to set emotional stakes, and the episode suffers because of it.

The remainder of Michonne continues to stumble, relying too much on the familiar tropes of the series: corrupt settlements, demagogues, kidnap, torture, human depravity and desperation. This trilogy may reach the highs of the previous Walking Dead games by the end of the third episode, but the current story and characters will need further development and the events absolutely require more originality.

Fans of Michonne from the comics or TV series may rejoice in the insights the episode provides on her, yet in comparison to the previous season of Walking Dead, it falls short. I hope that the next two installments will reframe the story's events more positively and ultimately reveal a much larger, richer, and more interesting arc. Rating: 7 out of 10


Disclosures: This game was obtained via publisher and reviewed on the PC. Approximately 1.5 hours of play was devoted to the single-player mode (completed 1 time) and there are no multiplayer modes.

Parents: According to the ESRB, this game contains intense violence, blood and gore, sexual themes, and strong language. Players hack up zombies, corpses are displayed, people are shot, and adult language is frequently used.

Remappable Controls: Yes, this game offers fully remappable controls on the PS4 via the hardware. No, this game's controls are not remappable on other platforms.