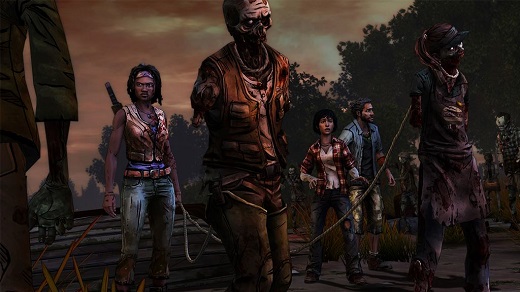 HIGH Playing as a woman of color and exploring issues of motherhood.

WTF Who knew a vice grip could double as handcuffs?

Give No Shelter is the second episode of a three-part arc that focuses on Michonne from The Walking Dead universe before she met the survivors from the comics and TV series.

The first episode of this trilogy, In Too Deep, did little to subvert the formula that Telltale has honed to a science, and it felt stale as a result. Give No Shelter begins with similar mistakes, kicking off with a dramatic escape that immediately illuminates its arbitrary choices—something episode 1 suffered from in spades.

For instance, players are forced to risk life and limb to rescue a friend, only to be immediately presented with a decision to let that friend sacrifice himself. After realizing the consequences of rescuing him, I was frustrated that I didn't have the option to refuse to help in the first place. The game forces a crisis that I would have chosen to avoid if it had actually given me a choice, so forcing a decision about throwing him under the bus later felt un-earned.

Following this opening sequence, the game slows down somewhat, as players travel to yet another supposed safe house. Here the developers start to balance tension, action, and human drama, drawing the characters of Michonne and her companions more clearly.

Their arrival at this house represents the strongest chunk of Michonne's mini-series so far. Players discover more about her daughters, and then settle into a familiar but comforting domestic space where drama derives more from interpersonal conflicts and mutual empathy than undead hordes and bloodshed.

It's noteworthy that players actually get to play as a mother who's also a woman of color. Both positions are so often marginalized in the gaming space, particularly in this era of "dad games" such as The Last of Us and, indeed, the first season of Telltale's The Walking Dead itself. Unfortunately, the mother players inhabit is a disgraced one; a woman who has been separated from her children under mysterious circumstances that will no doubt be revealed in the final chapter. In typical fashion, however, the game soon shifts away from domestic matters and reintroduces wanton death and gore, bookending the chapter with a series of deaths and yet another grave moral choice.

Give No Shelter tries (and fails) to set this final decision up as meaningful to the player and to Michonne as a character. Narratively, it may prove to be meaningful, but in a diegetic world that is essentially a moral graveyard, life and death are equal sums, and Give No Shelter doesn't feature enough hope or light to meaningfully demarcate one from the other. In other words, who cares?

While it's a stronger entry than In Too Deep, Give No Shelter doesn't justify this mini-season. Michonne's story so far—and the series in general—relies more and more on death and violence while providing fewer meaningful choices for players to contemplate. Perhaps this is the way it's been all along, but each entry succeeds or fails based on characters and writing. If you ask me, this is the weakest season in both regards. Nonetheless, we will have to wait until the final entry to figure out whether or not this trilogy, like Michonne herself, can find some kind of redemption. Rating: 7 out of 10

Disclosures: This game was obtained via publisher and reviewed on the PC. Approximately 1.5 hours of play was devoted to single-player modes (completed 1 times). There are no multiplayer modes.

Parents: According to the ESRB, this game contains intense violence, blood and gore, sexual themes, and strong language. People get shot, graphic surgery is performed, heads explode and are caved in, limbs are removed, and other graphically violent actions occur.

Remappable Controls: Yes, this game offers fully remappable controls on the PS4 via the hardware. No, this game's controls are not remappable on other platforms.