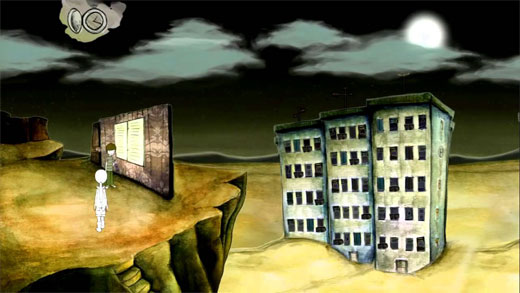 LOW An early bug that kept freezing my game.

WTF What is Sloth? I mean, seriously, what is he?

The Rivers of Alice is easy to praise and condemn in the same breath. As a humble point-and-click adventure set in the surreal dream of a young girl, it offers handcrafted aesthetics and memorable music. Unfortunately, the appeal is dampened by simple mechanics and boring or irritating puzzles.

The setup for Alice is as modest as they come. After the titular girl's pendant unleashes four dragonflies one night, she wakes up to discover her bedroom wall has given way to another world altogether. Venturing into the world of her dream, players have to help Alice recover the dragonfly sprites scattered across her unconscious. While it's never made clear why, finding these dragonflies seems to be the secret to escaping the dream.

The world of Alice is broken up into individual screens, each with their own compositional elements, color palettes, characters, and puzzles. Players interact with the world by tapping on characters and objects via the WiiU pad's touchscreen. Alice then walks slowly to where players have tapped. Since there doesn't seem to be a way to increase her painfully tedious walking speed, be prepared to spend a lot of time waiting for Alice to saunter from one side of the screen to the other.

In typical adventure game style, the puzzles in Alice range from obvious to annoyingly obscure. The developers offer plenty of hints for befuddled players, whether from in-game characters or from books that offer poetic lines corresponding to current challenges.

For the most part, the puzzles are straightforward. One might include tapping flowers that represent musical notes in the proper order. Another may include rigging an hourglass to give players extra time for a time-sensitive task. These were mostly fine, but later in the game the puzzles can become tiresome. Matching lights in apartment building windows with constellations in the sky was bad, but even worse was one asking the player to move a group of birds around in a precise way. Good luck figuring out the logic behind that one.

While the puzzles were hit-or-miss, the most arresting element in Alice has to be the unique hand-drawn art—it looks ripped from the pages of an artist's notebook.

Some elements of the world resemble minimalist watercolors, while others, including Alice herself, appear to be black and white paper cutouts. The mix of styles works surprisingly well and contributes to the general motif of a fantastic, yet subdued dreamscape. Unfortunately, Alice's art feels like a bit of a waste since players have to interact with the game exclusively through the WiiU touschscreen. More time is spent looking at the pad than at a crisp HD TV display.

While the art might be a wash, the musical pieces in Alice set it apart from the average indie adventure. Players are greeted with the twinkling of guitars as they explore the world. The instrumental music is soft, somber, and peaceful. It's a treat, and somewhat makes up for the otherwise rote experience of playing. The music that accompanies the game's ending is particularly good. Delirium Studios must have realized what they had here since they allow players to listen to the tracks from the main menu.

In terms of technical performance, it must be said that the loading times between screens and when starting up the game are agonizingly slow. This problem is especially egregious considering Alice's already-glacial walking speed and the slow pace of play overall. Also, Alice hard-locked on me thanks to bugs and glitches a number of times.

Ultimately, The Rivers of Alice is a vehicle to display the talents of its artists and musicians. The adventure is short and simple, and if not for the loading, slow movement and obscure puzzles, it could probably be finished in under an hour. Of course, game length does not equate to game quality, but with its other flaws taken into account, it's hard to recommend Alice to anybody who isn't already deeply invested in small indies. Rating: 6 out of 10


Disclosures: This game was obtained via publisher and reviewed on the Wii U. Approximately 3 hours of play was devoted to single-player modes (completed 1 time).

Parents: The ESRB does not describe the content of this game. However, it is suitable for all ages, but does contain some potentially frightening imagery in its creature designs.

Deaf & Hard of Hearing: One of the puzzles requires players to hear musical notes, but the game provides a visual clue that allows players without hearing to progress.