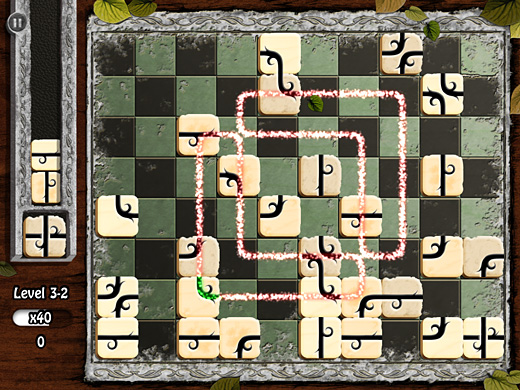 LOW A lot of the game boils down to waiting for the right piece.

WTF The main character is a strange mix between Harry Potter and The Riddler.

In the world of The Lost Shapes, the tile-dropping game introduced to the player is known as "Magic Chess." This is a bit of a misnomer. The board is checkered and there are rules and strategies involved, but that's where the similarities end. Instead, The Lost Shapes should be understood more as a tile-based, shape-building game that can accelerate to a breakneck speed in its later levels.

Like the best of small, mobile games, Shapes starts out slow and methodical—almost boring—but with time becomes a complex, nail-biting race against the clock and the player's own damaged sense of spatial reasoning. In her haste, the player must form shapes, clear the board, and hopefully deploy the next tile before the docket fills up and the game ends. In this way, it can either be a relaxing, meditative activity or an anxiety-inducing gauntlet comprised of shapes, magic, and scorn. It depends on the player.

Additionally, some tiles feature special symbols such as a star, moon, and sun, which grant a higher score bonus when incorporated into a shape. Finally, modifier tiles like the bomb, snowflake, and nuke tiles are introduced to help out in desperate situations. At any time, the player can switch out a tile on the board with the first in her queue, allowing for a speed of play limited only by the player's tapping abilities.

For whatever reason, Rockabyte wrapped The Lost Shapes around a fantasy narrative involving wizards, mysterious magic books, and a young, red-headed whippersnapper who grows up to be the player's guide through the game. Although certainly not a reference many will get, I cannot help but think of Castlevania: Symphony of the Night's narrator when listening to the narrator in Lost Shapes. The voice is stilted and mechanized, but still so serious about the subject matter. In a game with production values that are otherwise on par with other quality mobile games, the anachronistic delivery certainly feels like a blast from the past. This is not a critique so much as it is me pointing out an intriguing quality or an endearing flaw—out of everything in Shapes, I found this detail to be the most memorable.

Occasionally the game design feels like it forces the player to wait out the queue for the right piece to complete the main objective in any given stage. I understand that while waiting, the player is encouraged to form other shapes and increase her score, but sometimes this artificial lengthening of stages feels a little too transparent and the player's enjoyment may suffer as a result. Beyond this minor quibble, there's a lot to like about The Lost Shapes. Even without the quirky narrative, there's magic in the game's simple but solid design. Rating: 8.0 out of 10.

Parents: The ESRB does not review iOS games. This game is rated 4+ on the App Store. This reviewer thinks it is suitable for children of all ages.

Deaf & Hard of Hearing: Sound is not required to enjoy this game.