Home is Where the Hearth is… Right? 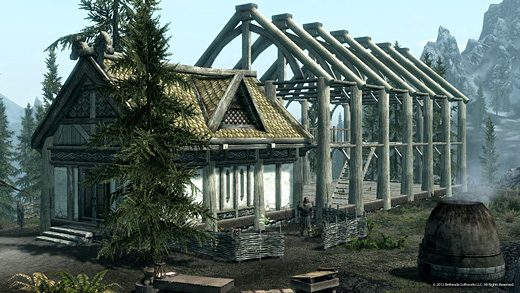 HIGH Hiring a steward to handle the busywork.

LOW Needing a steward to handle the busywork.

WTF The steward I hired refusing to stay on the estate!

The Elder Scrolls V: Skyrim's strength is also its weakness. It's an enormous game, and sometimes small details get lost in the sprawling world—small details like the new Hearthfire

DLC. Downloading the new content is easy, but accessing it can prove to be a little more challenging.

Although not as complicated as building a house in real life, constructing a dream home in Hearthfire (its purpose) can feel just as daunting, mired as it is in material and monetary costs, not to mention difficult decisions about which kinds of rooms to invest in. Yet in many ways Hearthfire presents a simulation of real home ownership. One puts time, effort, and money into building a comfortable domicile, and in the end, the only thing it's good for is sitting around in and storing your junk.

Initially, players may have trouble getting started in Hearthfire. The most important thing to know is that there are only three cities in the game that allow the purchase of land to build a home on: The Pale, Falkreath Hold, and Hjaalmarch. Knowing this off the bat will save the player a lot of time.

I finally discovered the opportunity in Falkreath. Unfortunately, the Jarl there wanted me to kill a bunch of bandits first, one of the many radiant quests that certainly annoy seasoned players of Skyrim. Even after completing the quest, informing the Jarl, finding his steward and purchasing the land, I still had to find my property located on the outskirts of the city, nestled up close to a cliff-side and within walking distance of a lake.

Once there, the only objects on the fallow property were a drafting table, a chest with supplies to get me started, a workbench, and a copy of Beginner's Guide to Homesteading, which among other things, explained how I needed wood to start building my house. Great, I muttered to myself, another shopping quest. Luckily, nearby I found a lakeside lumber mill and purchased a stock of wood. Of course, I also had to track down nails. Having never spent much time "smithing" before, I had to learn to buy iron ingots and forge them into building materials. 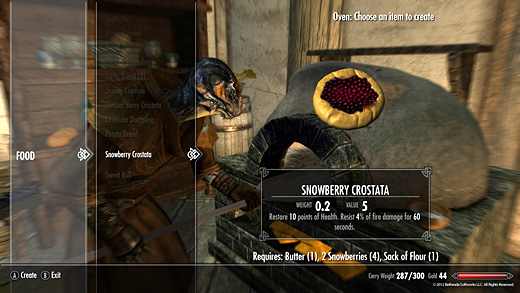 Once I had the foundation and walls built, I paused a moment to admire the night sky, complete with a massive planetoid moon—I had never noticed it before—from the inside of my roomless domicile, pine trees brushing gently against my periphery. It was a serene moment, and I could almost feel the cool night breeze against my whiskers. I was doing it. I was living the Tamrielian dream. And after only an hour of Internet research and disengaging, arduous quests, too!

Once the player finally understands the basics of what materials to gather and where to acquire them, the actual process of building up the property begins. With enough materials and coin, players can create a garden, animal pen, smelter, and apiary, among other homestead luxuries.

Some resources are available onsite. For example, to gather more rock, I had to literally toil away at the rock wall next to my fledgling shelter. The process of collecting clay, another necessary raw material, is equally tedious. Ostensibly, these activities are the equivalent of watching grass grow. In its simplest form, Hearthfire is a flashy Facebook game, a kind of high-definition Farmville.

Once the player builds a house and upgrades to a main hall, she will be able to hire a steward to handle the more mundane aspects of homesteading—namely buying building materials and furnishing rooms. Unfortunately, stewards have a way of wandering off, a glitch that forces the players to track them down in their original homes. If more company beyond a steward is desired, the player can invite his or her spouse to live there and also adopt children, who can be given gifts and played with. Occasionally, the player will also have to fend off threatening creatures from her property, a feature that, again, is more irritating than anything else.

Overall, the entire endeavor is extremely costly and a good chunk of playtime is necessary to amass enough money to trick out the small mansion after blowing thousands on the initial structure. Yet this is perhaps the true quality of Hearthfire—the ability to simply get players back into the world of Skyrim after abandoning it after exhausting the main quest or slaying through the Dawnguard expansion.

For players who have always wanted a virtual family and luxurious estate in the land of Skyrim, The Elder Scrolls V: Skyrim—Hearthfire

provides a suitable solution. For other players, Hearthfire can easily devolve into the video game adaptation of the 1986 Tom Hanks movie The Money Pit. Rating: 5.0 out of 10.


Disclosures: This game was obtained via publisher and reviewed on the Xbox 360. Approximately 5+ hours of play were devoted to the single-player mode, and the game was not completed. There are no multiplayer modes.

Parents: According to the ESRB, this game contains blood and gore, intense violence, sexual themes, and use of alcohol. "Intense violence" isn't a term I'd use, but it does get pretty gory in some places. I wouldn't be too worried of teenagers younger than 17 were playing it, but the littler ones should be kept away.

Deaf & Hard of Hearing: If you're playing a stealth character you might have some problems. Enemies don't appear on your radar until you've been detected, meaning that you become somewhat reliant on sound if you're sneaking. I don't think it would be a huge problem, but I could see it making the game a little bit harder. Outside that things should be fine—all spoken lines can be subtitled.