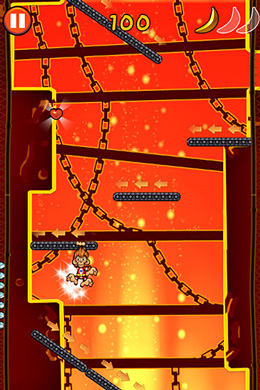 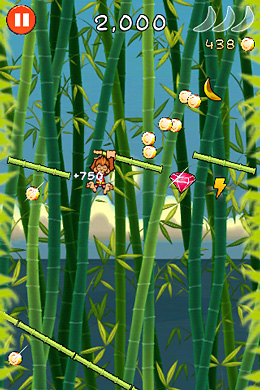 HIGH Dozens and dozens of levels.

LOW Game pacing controlled by scroll of the screen.

WTF The design of the villain. Seriously.

Framed as a rescue mission that involves descending to the bottom of over 70 levels crisscrossed with vines, ropes, and trampolines, Herotainment's Tango Chase challenges players to memorize stage architecture and obstacles, exercise restraint and precise timing, and master the sometimes unwieldy tilt and touch controls that move an ape named Tango back and forth.

While comparisons to Donkey Kong Jr. are apt since the character, music, and gameplay lend themselves to such an association, Tango Chase wants nothing more than to occupy some of the player's time and hopefully encourage her to pay a few dollars to skip infuriatingly difficult levels and/or remove the cavalcade of advertisements that plague the bottom of the screen. In other words, Tango Chase is exemplary of contemporary mobile game design in all the worst ways.

In a world constructed with bland art that looks like a jungle sometimes and a desert at others, the player takes control of Tango, a bumbling heroic monkey with a penchant for falling rather than climbing. By tilting the iPhone or iPad left or right, the player can move Tango in either direction. With a swipe of the finger, the player can drop Tango to the next set of supports that wait below him. The crux of the game is navigating the twists and tangles of available support structures, collecting fruits, gems, and coins along the way, and avoiding environmental hazards such as nasty animals, spikes, and electricity. In Tango Chase, everything wants to hurt or hinder Tango. It's the player's job to finagle the chimp to the safety of the stage's bottom.

With the collected coins, the player can visit the proverbial shop and purchase level skips and power-ups. These power-ups include speed boosts, coin magnets, and items to reduce the speed of falling, such as umbrellas and propeller hats. These can also be purchased with real money via micro-transactions. To Tango Chase's credit, with enough time invested in the game, the player can purchase these helpful items (and even the ability to turn off the advertisements) with strictly in-game currency. Still, this requires that the player actually dedicate that much time to a game that gives her very little reason to do so.

A whimsical, percussion-heavy jungle beat keeps the tilting action lively, although it doesn't quite distract from the game's overall methodically boring pace. Tango Chase would benefit from a design that rewards the player for understanding its rules and applying this understanding in order to play the game faster and better. A sense of player-controlled speed would allow for an organic feeling of achievement and skill growth. Instead, while the player can certainly learn the details of the mechanics and levels, the pace of the game is still dictated by the speed of the scrolling screen. If the player falls too far, regardless of whether a branch or rope is there to catch her, the game counts this as failure. This is the fundamental flaw with Tango Chase.

Art for mobile games can be a tricky enterprise, but the lack of animation frames and general flatness to the background and interactive objects reveals this game's origins as an experience crafted for a less critical web audience. With the right game mechanics, bad art can be forgiven. However, when the gameplay is dull and lacking nuance, the quality of a mobile game's art can do a lot to keep players interested. In Tango Chase's case, the look of the character and world do little to impress. As far as iconic characters go, Tango is no Donkey Kong. He's not even equivalent to Diddy, or even Candy Kong.

As a simian-based experience that has some evolving to do, Tango Chase does little to differentiate itself in an incredibly crowded mobile market. Although it doesn't completely insult with its presentation and simple game design, just being adequate does not make Tango Chase worth a player's time. Ultimately, Tango Chase is about as much fun as picking bugs off a monkey's back—and then eating them. Rating: 5.0 out of 10.

Deaf & Hard of Hearing: Sounds and music enhance the experience but are not necessary to enjoy the product.