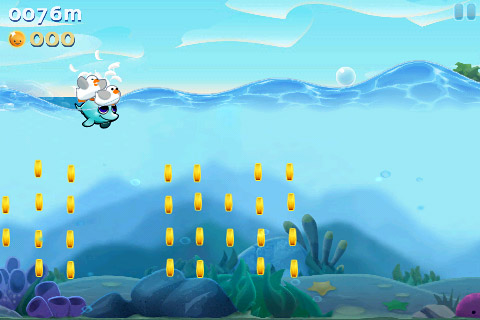 HIGH Zoning out while in the zone.

Under an azure sky, amidst the stacked, rolling waves of a nameless ocean, a stork loosens the handkerchief holding a baby dolphin and drops it into the sea below. The dolphin dives like a torpedo and leaps from the curled waters like a spinning top, engulfing clouds of coins while swimming ever onward toward the invisible horizon, toward the promise of whatever comes next… at least until a pair of jellyfish entangle the poor creature in their deadly tentacles, ending its life.

Under a blue sky speckled with wispy clouds, a clumsy stork drops a baby dolphin into the ocean, startling the infant and beginning a chain of events neither could have foreseen. Scared and confused, the dolphin swims blindly forward, avoiding poisonous jellyfish, collecting coins, and bobbing from the depths of the ocean floor to the liberatory heights above the waves. It rolls through the air unfurling a rainbow in its wake and oddly conjures a bird above who flies in unison before a man-o-war ends the dolphin's short life by gobbling him whole.

No, that's not quite right either.

Blessed with a "jelly shield" by the gods above, the same gods who always play with the meager lives of meek mortal creatures below, a small dolphin drops from the beak of a stork and embarks on a maritime adventure through the great expanse of the sea. It dodges pesky jellyfish—and even if one grazes the little guy, his shield allows him to withstand two tentacled wallops—and it pushes forward through the liquid world with a determination that would make Sisyphus himself proud. But, like Sisyphus, the dolphin's odyssey is doomed to failure and repetition; it's a cycle he will never understand but must repeat forever. 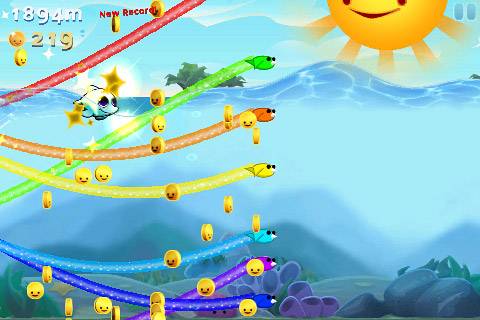 Whether reborn as a woman, an orca, an otter, or even a technicolored narwhal, our hero awakens into this world plummeting into an ocean as large and as morally empty as a desert, forced to swim for his life, occasionally achieving certain arbitrary goals set by the gods—goals like upsetting a certain amount of floating seagulls, or reaching a specific distance before succumbing to the perils of an indifferent and deadly sea. Again.

Sea Stars reminds me of the character Joseph Grand from the Albert Camus novel The Plague. As a perfectionist writer, Grand can never get past the first sentence of his planned novel. After writing one version, he finds himself unsatisfied and devotes himself to crafting another, and then another, trying to find the perfect sentence that captures all that he means to convey. Playing Sea Stars is like trying to craft the perfect sentence only to return again and again to reiterate your phrasing, the descriptions, verbs and adjectives. The act of re-writing this sentence might seem important and might feel like creativity or dedication, but the end result is a lot of time spent on one sentence and a novel that will never be finished.

Once more with feeling.

In the distance, a lone palm tree shades an abandoned hut on an isolated island as a seagull drops a small creature to a fate worse than death, a fate that involves traveling across a flat-screen.  Restricted to moving either down or up and tasked with avoiding a few obstacles while collecting coins, this creature struggles desperately against the end it knows is coming.

None of these work as first sentences in an honest review of Sea Stars. They are all just iterations or placeholders for the perfect sentence—they're just like that perfect run in the game that always waits ominously in the next attempt. Small goals try to make each session meaningful, but they're only as meaningful as exchanging one word for another, tweaking a sentence ever so much in order to say something new and fresh when there's nothing new or fresh to say… But there's always the next first sentence to re-write. There's the obsession of The Plague's Joseph Grand.

A stork drops a dolphin into an unforgiving ocean, and the dolphin knows this isn't the beginning, it's the end—and anyway, he figures to himself as the cold waters swallow him, Jetpack Joyride did it better. Rating: 5.0 out of 10.


Disclosures: This game was obtained via publisher and reviewed on the iPad and iPhone 4. Approximately 3 hours of play were devoted to the single-player mode, and the game was not completed. There are no multiplayer modes.

Parents: The ESRB does not rate iOS games. On the app store this game is rated 4+. This reviewer thinks the game is appropriate for all ages, and features cute, cartoon animals swimming, jumping, and avoiding jellyfish.

Deaf & Hard of Hearing: No audio is necessary for enjoying this game.