Somewhere Between Sushi and Fish Sticks 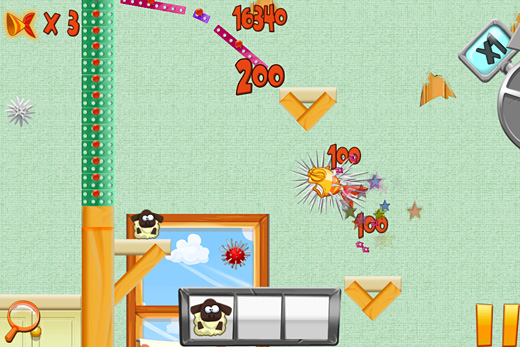 Some people might argue that the difference between a real chef and somebody who just follows directions is the ability to take the ordinary and invent the extraordinary; the ability to come up with a concoction nobody has tasted before. With a cursory glance at Saving Yello, the impulse might be to claim Dreamfab and Tactile Entertainment were just following the directions in a video game cookbook. Add two spoonfuls of Angry Birds. A dash of Pixar and Finding Nemo. One cup of Nintendo's Kirby. Mix well. Hope for the best.

This would be an unfair judgment. Saving Yello is more than the sum of its parts, and more than its influences or ingredients. While it doesn't make the biggest splash in terms of game design, it still does more than tread water. Saving Yello is an original and clever experience, and the result of a creative kitchen of designers.

Children should never be allowed to have pets. If they are not pulling the dog's tail or trying to stuff the cat into the mailbox, they're plucking the poor goldfish—his name is Yello—from his glass paradise and dropping him all over the house so that he has to wiggle, squirm, and snap his way back to the safety of his bowl. At least, that's the conceit in Saving Yello.

On the way to reaching the fishbowl at the end of each level, the player flicks a small goldfish into Fraggle-esque toothpick structures while collecting power-ups and stuffed animals in order to score as high as possible and earn up to three stars. In this way, the game presents a slightly more dynamic version of Angry Birds's slingshot mechanic, only this time the player tugs on Yello's tail (stretching him like a rubber band) before sending him off in an almost certainly painful trajectory toward the goal.

Using simple tap-and-drag slingshot controls, propelling Yello around the level is intuitive and effortless. The only problem that sometimes emerges is when Yello flops around on the lowest point in a level and the camera won't give the player enough space to stretch Yello's tail downward. In this case, either the player simply can't launch Yello the distance he or she prefers, or the game will auto-launch Yello when the player's finger reaches the edge of the screen. Both of these results can be frustrating when every move counts while hunting for the high score. Other than this slight issue—and it is slight—firing Yello around the small, yet well-built levels is painless.

With a total of 40 levels covering three main environments, there's plenty of terrain for Yello to flip, flop, and fly through. To make environmental destruction more interesting, Yello is able to acquire several power-ups that bestow him with temporary abilities. Fire allows him to burn structures he collides with. Spikes give him the power to stick to surfaces, like walls and ceilings. The snowflake turns Yello into an ice cube that freezes structures, making them brittle enough to collapse under their own weight. In addition to these power-ups, environmental aids such as dynamite, hooks, and bomb bags offer Yello alternative methods to rain destruction down around him while inching toward the fishbowl in each level. Finding the strengths of each power and knowing when to strategically switch one power out for another gives the game an added tactical dimension and feels a little like classic Kirby gameplay, albeit in a smaller box.

Like most games in the iOS world, content is unlocked by collecting stars, awarded based on score after each level. Unlike some games, however, progressing to the final levels in Saving Yello will not take the dedication of a dying fish.  By playing casually, most players will be able to experience all the content the game has to offer.

Although there are certainly parallels to be drawn, this is no Finding Nemo, especially in the artistic department. Yello emotes in a variety of ways and the game's animations provide suitable eye candy, but there's still an economic emptiness to the levels in terms of detail and texture, especially when the camera is zoomed out. That said, Yello's facial animations sell him as a protagonist, switching between blissful, shakily anxious, and indifferent if not despotic. If left idle for too long, he even grabs the opportunity for a quick nap, probably dreaming of life outside of the domestic hell he finds himself.

For fans of the Angry Birds and Kirby franchises, Saving Yello provides a familiar but fresh experience that fuses some of the best elements from both series. Flicking feels right and learning to use power-ups effectively mixes up the otherwise tap-and-drag gameplay. So are Dreamfab and Tactile Entertainment just following the directions in the cookbook or are they real chefs, doing something altogether new with familiar ingredients? I'll put it like this: If Saving Yello were a meal, it certainly wouldn't redefine the culinary idea of fish. Just the same, we're not dealing with frozen fish sticks here either. Rating: 8.0 out of 10.


Disclosures: This game was obtained via publisher and reviewed on the iPad and iPhone 4. Approximately 5 hours of play were devoted to the single-player mode, and the game was completed. There are no multiplayer modes.

Deaf & Hard of Hearing: No sound is necessary for the enjoyment of this game.