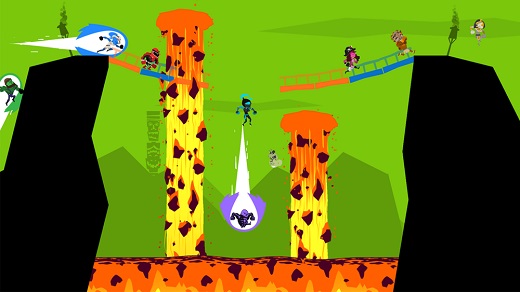 HIGH Being in a room with eight friends, taking the lead in a race, stopping before reaching the trophy to taunt and still managing to win.

WTF Picking up the power-up that switches places with another player while in the lead and ending up dying instead.

Despite not being a massive commercial hit, the Wii U is still the best console for couch co-op play, and Runbow is yet another stellar addition that works best in a room full of people holding controllers and elbowing their friends. Runbow delivers a unique and engaging party experience that Wii U owners shouldn't be without.

The basic premise behind Runbow involves racing against eight other contestants in a mad dash across a two-dimensional level, leaping over crevices, lava pits, and spikes while trying to be the first to the trophy at the end of the stage. The hook is that most of the platforms in each level are color-coded and disappear when they match the ever-shifting background color. This creates situations where, for example, players think they're jumping to the safety of a green platform only to find nothing beneath their feet as the level's background color transitions to green mid-jump.

Each level in Runbow is short and fast-paced, which encourages runners to use every jump, dash, slap, and power-up to come out ahead. In order to even the odds of a constantly changing environment, players also have the option to double jump and rocket jump either vertically or horizontally.

In addition to the standard Run mode, Runbow offers a variety of other ways to play.

Arena presents a ‘Last Man Standing' variant where players attempt to knock each other into spikes. King of the Hill wants players to secure a central position on the stage until a timer reduces to zero. One of the most unique modes, Defeat the Color Master, allows the player with the Wii U Pad to change the background on the fly while other players try to reach the trophy alive.

For those interested in more solitary pursuits, Runbow offers a substantial singleplayer mode featuring 146 levels dispersed across a large grid. When players finish one level, they unlock levels adjacent to it. There's also a Bowhemoth mode that tasks players with leaping their way out of the belly of a giant beast without the ability to save their progress. The faint of heart need not apply.

Online play is generally smooth, and players can bring as many of their local friends as they want along for the ride. Before matches, players can customize their male and female Runbow avatars with hats and costumes, or choose between a variety of unlockable indie game guest stars, such as Juan from Guacamelee!

While the online game lacks the same magic as local co-op play, it is a passable and enjoyable substitute. One of the only major flaws is that the Wii U online community for the game is rather small, which means outside of the Run mode, finding enough people to fill all nine player positions is a challenge.

Of course, Runbow isn't a perfect party game. While the controls are simple to learn, the responsiveness of button presses can feel erratic. The slowdown, whether from power-ups or online lag, can also turn an otherwise enjoyable experience into a frustrating series of mishaps. While in multiplayer this means that players lose a race, in singleplayer it means replaying an intensely challenging level over and over again.

Ultimately, it's hard not to recommend Runbow to Wii U owners. It supports almost every controller available for the platform and allows up to nine people to compete in hilariously frenetic racing action. The online modes and singleplayer takes care of players who don't have friends over on a regular basis, and the game offers up enough challenges and unlockables to keep folks busy for hours and hours.

On a system without a lot of high-profile support lately, Runbow shines as an exclusive that plays to the Wii U's strengths and reflects the Nintendo ideals of a couch full of friends, laughing and playing together. Rating: 8 out of 10

Parents: According to the ESRB, this game contains: mild fantasy violence. Players can punch each other or fall into spikes or lava, but there is no bodily harm represented.

Deaf & Hard of Hearing: Sound is not necessary to enjoy this game, only a keen sense of sight and color.