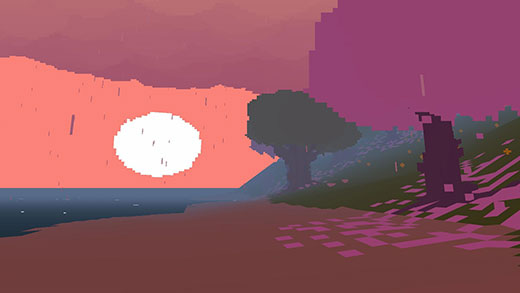 HIGH The transcendental surprise of phasing to a completely new island.

LOW The lack of interaction with the world.

The first time I played Proteus was on PC sometime after its January 2013 release. Knowing very little about the game, I booted it up, swam to the shore of a lonely, pixelated island, and wandered around its barren landscape for several minutes.

The colors were muted. Flora and fauna were represented almost abstractly.

I navigated a copse of trees, followed some hopping rabbits, and scaled the largest hill in sight. After several minutes the sun started to set on the horizon; a brilliant and somber scene.

I watched from my perch atop the hill. It was minimalist and beautiful, and I thought that was all Proteus had to offer, so I turned it off.

Then the PlayStation 3 version of the game arrived as part of the PlayStation Plus offerings. To kill some time before bed one night, I restarted the game, determined to discover something new on its procedurally generated island.

I had a similar first day wandering around. I witnessed another lovely sunset, and then I let the darkness envelop me.

After a few minutes, something wonderful happened—an area of the island lit up with the glow of a hundred swirling spites. They beckoned to me, and I answered their call.

Entering the illuminated vortex, time and space began to warble, the stars swirled, and the seasons seemed to shift around me until I was transported, in a burst of light, to an altogether new space.

This was amazing… I can't underscore the experience enough.

I didn't know Proteus hid such secrets. Suddenly, I wanted to know what other things the game would reveal.

During the rest of my time with Proteus, I discovered several more islands, each more fascinating than the last. One island was swamp-like, forlorn, and putrid. The next was populated with a forest of thin trees, like bamboo.

Sometimes the clouds would hang low and cover the environment in a thick fog. At one point, instead of a mass of swirling filaments pointing to another island, I was greeted by a shadowy figure under the moonlight. Chasing the figure, I eventually ended up lost in a thicket of singing bushes before finding my way to the next portal.

Without any story cues, without any characters, and without the slightest hint of purpose, I felt involved in a journey. Something that mattered. A mystery I would strive to unravel but never truly solve.

It felt magical, surreal, and otherworldly.

Proteus is certainly not for everybody. All the player can do is walk, but the game somehow transcends its own limitations. With every step the player takes, if she has patience and gives Proteus a chance, something starts to happen.

It becomes like a dream, and when it concludes, players will wake up refreshed. They will not be able to perfectly describe what they've just experienced, but the feeling and memories will linger. Rating: 8 out of 10


Disclosures: This game was obtained via PlayStation Plus and reviewed on the PS3. Approximately 1 hour of play was devoted to single-player modes (completed 1 time).

Parents: The ESRB does not offer a content description for this game. However, it contains simulated walking around island environments populated with plants and animals. There is no violence.

Deaf & Hard of Hearing: The sound design definitely enhances Proteus, but it's not necessary to enjoy the experience.