To Sleep: Perchance to Dream… 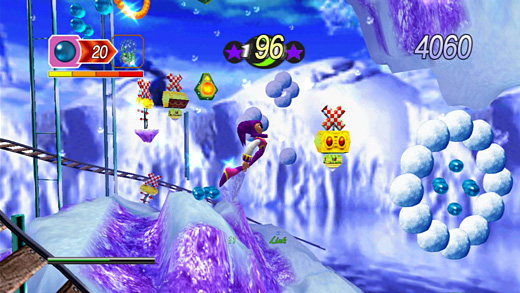 HIGH The sense of "flow" the flying sections encourage.

LOW Being forced to take human form and walk around levels.

After the ruler of Nightmare land hatches a plot to take over Nightopia, the world populated by the dreams of people, a young boy and girl join forces with a rebellious flying jester named NiGHTS to thwart the evil wizard's villainous plan. Though NiGHTS was never beloved for its simplistic story, the reason it remains a cornerstone of retro gaming is the fanciful flight sequences it offers, accented with bursts of speed and agility. The beauty of NiGHTS can be summed up in three words: Flight. Flow. Nostalgia.

NiGHTS gives players the choice between playing as Elliot or Claire, two children who go from having bad days to equally bad nights as they work with the titular NiGHTS character to save Nightopia. The game features a total of seven levels, referred to as "dreams," three unique to each child and a final stage they share.

Although the game may seem like it's about whimsy and freedom, it's actually a tightly-structured and surprisingly complicated thing that's similar to doing time trials or speed runs. Each dream is split into four segments, and the goal of each segment is to collect 20 blue chips and release the imprisoned "Ideya"—a glowing orb representing the personality traits of the dreaming Claire or Elliot, before the clock ticks down to zero. After completing the four segments, the player must once again race the clock to defeat a boss.

Bosses here are more like exercises in timed puzzle solving than any kind of actual battle. If the player runs out of time while collecting blue chips as NiGHTS, she reverts to the sluggish, terrestrial form of Elliot and Claire and must either finish the segment on foot or return to the starting point to regain control of the adroit jester. However, if the player runs out of time during a boss encounter, the level ends and must be restarted from the beginning. With only seven levels to explore (eight if you count the unlockable Christmas NiGHTS world) NiGHTS can be described, like a dream, as fleeting and short. Yet like any good dream, NiGHTS can also be seen as mysterious and complex, contemplative and alluring. 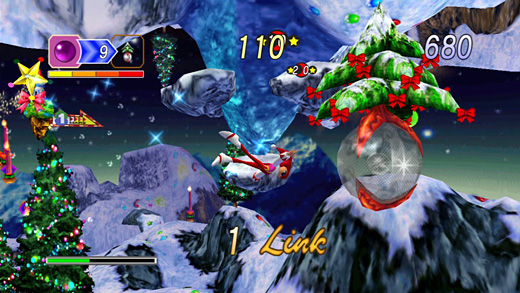 The game works best when the player forgets the timer; when the soaring acrobatics of the NiGHTS character become as playful and creative as twirling sparklers in the black of night on the Fourth of July, or when the game becomes not a race against time or a collect-a-thon of glowing objects but a seamless flow from hand to screen, like tracing your fingertip through water. In fact, NiGHTS does flying as well as 2011's Rayman Origins does swimming. Both offer the feel of slick, multi-directional freedom.

The concept of "flow," drawn from psychologist Mihaly Csikszentmihalyi, combines an intensity of energy and focus with corresponding pleasure and fulfillment. Jenova Chen and the folks at thatgamecompany have used flow as a structuring principal in all of their games, starting with flOw and used most recently in the transcendent adventure Journey. I would suggest "flow" is the quality that gives NiGHTS its lasting appeal.

Unfortunately, the game only manages to accomplish this ideal for fleeting moments, rather than being a structuring principal for the entire experience. In fact, the flow here seems more like an accidental consequence of the designers' dedication to making the flying portions of the game feel as seamless and dream-like as possible. Nonetheless, these are the moments that make NiGHTS a classic. In contrast, when the player runs out of flight time and is forced to control one of the children, the game screeches to a halt and the experience changes from joy to frustration. When not airborne, the ahead-of-its-time gameplay instantly becomes the maladroit, poorly animated 3D platforming the mid-to-late nineties was known for.

NiGHTS cannot be separated from its original historical context and platform. It was released on the Sega Saturn in 1996, and like Super Mario 64 at the time, NiGHTS represented a technological and imaginative leap in console video games.

First, the saucer-like controller that came packaged with some versions of NiGHTS offered smooth, precise analog controls similar to those championed by the Nintendo 64 controller. The oneiric, otherworldly environments, with their upside-down islands and twisting architecture, brought a whimsical feeling to the third dimension that had not fully been realized outside of Nintendo's newest Mario title. Whereas Super Mario 64 largely defined the 3D platformer and its franchise, NiGHTS arguably represented the evolution of the Sonic franchise that we've still never quite received; something that should be propelled by a kinetic pulse and a sense of disorientating but liberating inertia. In essence, NiGHTS defined the Saturn the way Super Mario 64 defined the Nintendo 64 and each game remains an important piece of software for that generation of consoles.

As a visually-renovated trip down memory lane, NiGHTS into Dreams

largely succeeds. Unfortunately, the game design has two competing forms: one is breathless, invigorating, and fluid, while the other is lumpy, broken, and boring. However, in the moments when the game's flight, flow, and nostalgia combine, it's difficult to think of a more satisfying experience. Rating: 7.0 out of 10.


Disclosures: This game was obtained via publisher and reviewed on the Xbox 360. Approximately five hours of play was devoted to single-player modes and the game was completed. There are no multiplayer modes.

Parents: According to the ESRB, this game contains comic mischief. This game is appropriate for all ages.

Deaf & Hard of Hearing: No sound is necessary to enjoy the game.