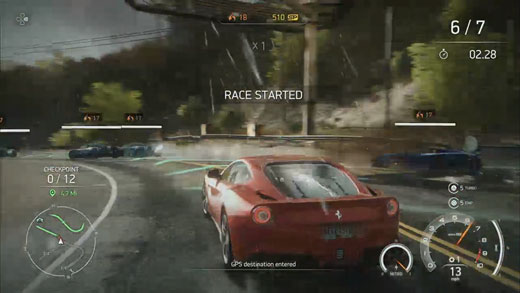 HIGH Narrowly escaping a pursuing squad of police cars and power drifting into the safety of my hideout with hundreds of sounds of speed points under my belt.

LOW For an open world driving game, there are not nearly enough alternative paths and emergent gameplay moments that use the geography.

WTF The non-ironic gritty and serious tone of the "story."

In a narrative introduction that is so "gritty and serious" that it borders on satirical, Need for Speed Rivals

(NFSR) sets up the dual narratives of international street racers and the high-octane police force dedicated to taking them down. These are the two factions that are the titular "rivals," and players can choose between at any given time. Racers provide competitive sprints around the coastal Redview County world with plenty of jockeying for position, and the police mode offers a more predatory mode of play.

The player starts by selecting either a cop or a racer. Since the player can switch between the two careers at any time while at a base, the initial decision has no real impact on the game.

Players start in a "command post" for cops or a "hideout" for racers. This safe zone allows players to choose, customize, buy or upgrade their car, purchase new pursuit tech (offensive and defensive weapons), and pick between three sets of objectives available at any one point in the game.

At every chapter, players are given new sets of objectives to complete called "speedlists," which act as benchmarks for the game's central progression system. Once players complete speedlists, they can return to base to receive rewards, upgrade their cars or gear, and head back out on the road. These revolving objective lists keep the game feeling fresh, since it can sometimes devolve into a grind.

Each faction in NFSR features its own sets of events, although there is significant overlap between them. Cops can choose rapid response, hot pursuit, and interceptor events. Racers can choose races, time trials, hot pursuits and interceptors. True to form, races are the only unique event on this side. Otherwise, the two factions share the same events, with the differentiator being that racers are always on the run, and cops are always on the chase.

Events scattered across the world can be accessed in a number of ways. From home base, players can choose to spawn at any event on the map. This initially eliminates the annoying driving from place to place that usually kills open-world racing experiences for me, but after the first spawn, players do have to drive themselves around. Players can also drive to any event on the map and start it with the press of a button. Additionally, many events can be started by simply running across other factions in the world.

Players earn ‘speed points’ (SP) to use as cash, and the SP accumulated during driving sessions is only collected when they return to their base. If the player is busted or wrecked before they return, all the SP is lost. This isn’t a problem for cops since they have no predators and can drive around collecting SP until they want to deposit it. However, for racers this system creates a risk/reward scenario. Conservative players, like myself, may not like this as much as the more forgiving police officer campaign, but others might enjoy the thrill that comes with this dangerous gamble.

This system benefits those who try to stay out and survive the longest, but can sometimes feel unfair. It's especially frustrating when the racer reaches the hideout just as car damage is critical and while the game fumbles to read the button input before a battalion of cops crashes down upon the player like a tidal wave. It would have been helpful to have a glowing field around the perimeter of the base for those moments when the player has to quickly position a car going 200 mph to stop near an accessible point.

With two full campaigns, there are essentially two games packed into NFSR, albeit games that share many similarities. Both positions, the pursuer and the pursued, feel unique and exhilarating for different reasons.

Cops get to feel like predatory wolves chasing racing cars around the map. Since racers have so much riding on their ability to survive for long periods of time, aggressive cops can terrify racers while trying to satisfy their speedlist objectives. Likewise, although they don't get to feel the power of authority, racers run around the world like mavericks, jumping in and out of impromptu races, dashing from one event to another, and always calculating how long they can stay out on the road before the heat gets too much for them. As a racer, memorizing the location of hideouts and repair shops, which fully replenish your car's health meter and weapons, becomes essential. Reaching either at vital moments can be the difference between keeping your 200,000 SP or losing it.

The map offers a diverse setting for races and other events. In a single run, players can drive from snowcapped mountains to sunbaked deserts, passing through a lush forest on the way. Additionally, the inclusion of a day/night cycle and shifting weather patterns make for unpredictable conditions, a fact that can be annoying when driving through blinding rain at night. Despite this variety, the game would benefit from more shortcuts and jumps to spice up the driving with some unexpected split-second directional changes and aerial feats. As it stands, sometimes the game feels too boxed in, especially as a racer trying to escape the cops on roads that feature no alternative paths or escape routes.

Besides the lack of a truly open world, technical and performance issues hamper gameplay. Finding a session to join can take time, and with the longer-than-desired load times, waiting to get started takes a few seconds too long. Additionally, the lack of dedicated servers means a frequency of host migrations. Getting booted from game sessions is a big problem.

Arguably, the racing genre doesn't create classics anymore. Publishers merely try to make the least offensive version of their franchise for that year. Owing to this truth, NFSR

succeeds at not being offensive. Sure, it's just bumper cars at its core. Just cats chasing mice. But sometimes that's enough. Rating: 7 out of 10


Disclosures: This game was obtained via publisher and reviewed on the Xbox 360. Approximately 12-14 hours of play was devoted to single-player modes and 5 hours of play in multiplayer modes.

Parents: According to the ESRB, this game is an arcade-style racing game in which players can select sports cars to race through realistic county highways. Players can proceed through the game as a street racer or a police cruiser, and the two rivals use weapons like spike strips or shockwave devices to attack other cars. Collisions are often accompanied by slow-motion effects and crashing sounds. While the game content itself is not offensive (aside from violent driving behaviors), the online activity and voice chat, not reviewed by the ESRB, may contain material not appropriate for children, including foul and offensive language from other players.

Deaf & Hard of Hearing: Sounds and music are not necessary to enjoy this game, although they add to the sense of immersion.