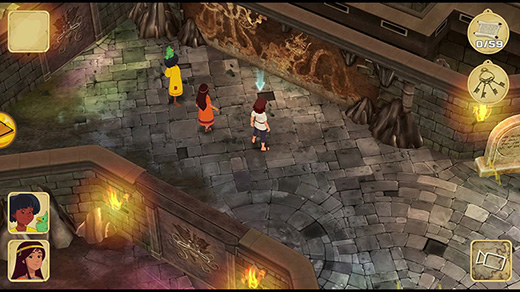 HIGH The game works, I guess.

The Mysterious Cities of Gold: Secret Paths was originally a cartoon co-produced by French and Japanese companies in the early 1980s. The French channel TF1 helped resurrect the show in 2013 for three seasons that continued the story of the initial series. As a companion to this revitalized franchise, Neko Entertainment and Ynnis Interactive have patched together an environmental puzzle game that loosely follows the plot from the show while highlighting the unique attributes and personalities of its three young protagonists.

Against a narrative that's based on South American history and folklore, the game stars three 16th century children in search of the Seven Cities of Gold. Esteban is an orphan that was rescued at sea by the Spanish navigator Mendoza, a man who features in the game's cut-scenes and leads the quest. The de facto leader of the group, Esteban wears a sun medallion that allows him to activate sun pillars. Zia is an Inca high priestess that can fit through small openings such as cracks in fences or cave walls. Finally, Tao is a living descendant of the ancient Mu Empire, and he specializes in deciphering its ancient language to offer the player hints. Tao also has a pet parakeet that can retrieve items. Players need to use all of these abilities to get past most stages.

Mysterious Cities of Gold offers several dozen levels spread across six regions of China built around simplistic environmental traversal and puzzles. Players can switch between any of the three main characters at all times, using the special abilities of each to move forward. The majority of the game involves finding keys, switches, triggers, and other objects that will open locked doors.

Sometimes the game asks the player to solve obvious riddles or number puzzles that require very little contemplation. For example, players constantly have to position characters onto floor triggers to open doors for another character to pass through. Then this character usually finds a button that opens a permanent path for all three protagonists to proceed. This basic scenario does change slightly as the game progresses, but the uninteresting structure remains the same.

There are also light stealth elements. Players have to sneak around patrolling pirate guards fairly often, using barrels and other containers to hide in, but the guards' paths are so linear and the guards themselves so slow that there’s little danger of getting caught. If the player does get caught, she’ll reappear just a few feet away from where the guard spotted her.

The complete lack of consequences for failure makes carefully sneaking around pointless. It also puts all the emphasis on the game's puzzles to create a sense of accomplishment. Unfortunately, the puzzles quickly grow boring after the first sets of levels. The demand on the player's intelligence does increase marginally, but not by much and certainly not enough to counteract the repetitive gameplay.

In an attempt to spice up this excruciatingly dull game, players can collect scrolls and treasures scattered throughout every level, but there's no real point. Most aren’t hidden, just far enough out of the way to ignore. The collecting doesn't add anything of substance, and the game doesn't incentivize the player to do it outside of acknowledging whether or not all the items were collected at the end of each area.

In between levels, short clips from the cartoon stitch the game's incomprehensible narrative together. This implementation is sloppy, and the editing so manic that it makes music videos look like contemplative art.

For those familiar with the show, these clips might mean something, but I was confused—dumbfounded even—after the first footage. Because of the choppy editing that cuts out a lot of content, there’s a sense of always having missed something. I didn't know who these characters were, why they knew each other, why they flew around in a giant gold spaceship shaped like a bird, or why they were looking for cities of gold. Without already being a fan, none of it makes sense.

To the game's credit, it does do an admirable job trying to be multicultural. Unfortunately, this results in its characters and settings feeling archetypal, if not dangerously stereotypical.

Exposing children to different cultures in South America and China and showing solidarity between them is great, but the game is arguably haunted by the specter of colonialism, especially with its French roots and Spanish protagonists. I don't expect the game to teach any real lessons about the tragic history of colonialism or its continued relevance today, but there is a hidden, almost gross sense of privilege sewn into the subtext of this game.

Despite starring three forlorn children, some from decimated or extinct cultures themselves, there is something unnerving about the narrative world operating in Mysterious Cities of Gold, something like a naïve thread of cultural tourism, of appropriation, or historical amnesia. These children and their guardians fly around the world in the 16th century, seeking the treasure of current and lost civilizations. In actual history, this quest was tainted with blood, rape and pillaging. Is this series then a counter-narrative, a corrective to the plundering and pain that accompanied the search for the New World and its many hidden wonders?

The truth is I don't know. I haven't seen the cartoon. The game certainly doesn't offer any evidence to suggest so. In fact, it doesn't really offer anything of value at all, and the embedded ideologies of conquest and colonialism it perpetuates and exploits in the name of children's entertainment gave me pause.

For children who are fans of Mysterious Cities of Gold, it’s likely a serviceable companion piece. For everybody else out there, this game isn’t worth the time. Rating: 2 out of 10


Disclosures: This game was obtained via publisher and reviewed on the Wii U. Approximately 3 hours of play was devoted to single-player modes.

Parents: The ESRB does not provide a description of this game's content. It features three children exploring ancient Chinese ruins, solving environmental puzzles, and avoiding pirates. There is some depiction of kidnapping and violence with the pirates, but nothing that doesn't appear on most cartoons.

Deaf & Hard of Hearing: This game does not require sound to enjoy.