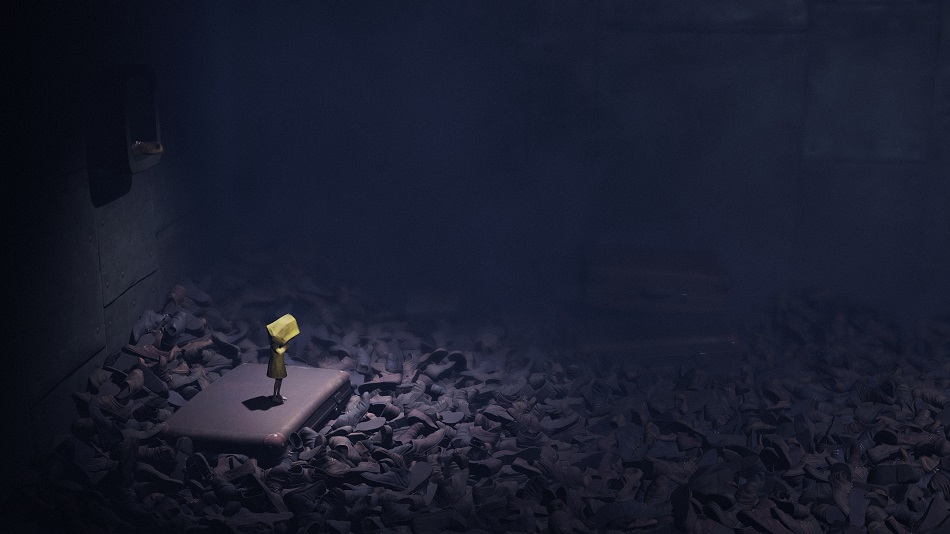 Little Nightmares drips with atmosphere, intrigue, and a foreboding visual design that combine to create a fascinating and disturbing world to explore. The game is imaginative and ghoulish in all the right ways, and recalls other recent atmospheric indie sidescrollers like Limbo and Inside, although unlike those games, it adds a bit of the third dimension to allow for deeper and richer environments. Yet underneath the exquisite beauty of its fleshy, dilapidated world is a game that sometimes feels undercooked.

Players control the diminutive Six, a sprite-like child hidden underneath a large yellow raincoat. The game begins with players escaping a suitcase in the bowels of a large ocean facility called The Maw, and Six’s goals are to find out who she is, what purpose The Maw serves, and whether or not escape is possible. To do so, Six will have to venture through a prison area, a kitchen, a feast hall, and the facility’s living quarters where she confronts the source of The Maw’s power and mystery.

At its core, Little Nightmares explores the corruption of children by the adult world. Six is sheltered physically by her raincoat and metaphorically by her innocence, but throughout the game she encounters sins of the adult world – suicide, greed, avarice, madness, and power – and gradually succumbs to them. Through its imagery and narrative, the game argues that the adult world corrupts everything it touches, and therefore children, as future adults, can be nothing more than victims of this corruption or little nightmares who are inheritors of the same legacy of malfeasance.

Each twisted area in Little Nightmares tells a story through its use, disuse, and detritus. The dynamic, low-key lighting keeps most rooms smothered in shadows and gives players an excuse to use a small lighter that Six carries, contributing to the unnerving and ill-lit exploration. Players scramble through ventilation shafts, up dumbwaiters, across dust-laden floorboards, and over tabletops cluttered with moldy dishes and bloodied cleavers. These environments alone are majestic and disturbing to explore. They work with the game’s themes to create a very specific and special experience. However, the dangers that lurk within the Maw’s decaying halls are what really shape the experience, for better or worse.

Although Six only contends with leeches in the game’s early areas, she soon encounters large, grotesque, humanoid monsters. A blind, hulking brute called The Janitor initially hunts for Six, listening for her footsteps and using his elongated arms to reach for her through walls and floorboards. This section initiates the game’s central gameplay loop, which is a series of cat-and-mouse scenarios where Six must sneak past or run away from monstrous characters that attempt to eat her. 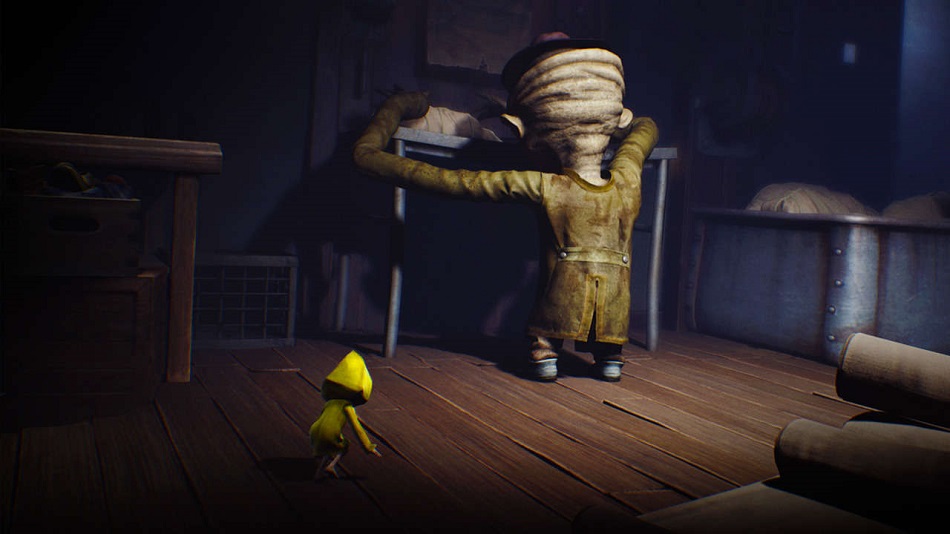 Surviving these areas involves players hiding under tables or inside boxes and trying not to be seen as they sneak to the other end of the room or clamber up shelves to reach the next vent. To complicate this hide-and-seek, Little Nightmares usually tasks players with finding a key or solving a simple puzzle. For instance, in one area Six must grind meat in order to make a sausage link long enough to swing from a table to a vent in the wall.

Although novel at first, getting through The Janitor’s haunt only gives way to an equally tense series of rooms where players must deal with other, similar ghouls. For the most part these are fine encounters that add tension to the game and a goal to reach, but this formula doesn’t vary much over time, and some mechanical hiccups soon got in the way of its ability to keep me engaged.

For instance, the physics feel a little loose. Whether it’s trying to throw items at elevator buttons or swinging on a chain to cross a gap, the physical rules of the world feel floaty and ill-defined. These physics also make Six’s movements feel clumsy and imprecise. While this helps characterize her as young and physically immature, it does not make the countless chase sequences and platforming sections player-friendly.

The fixed camera angle combined with the three-dimensional world also makes perspective incredibly difficult to discern. As a result, it’s hard to judge the distance or direction of important jumps. In one particular moment, players have to leap off The Maw’s hull onto a hanging chain. However, because of the position of Six and the camera, players essentially have to make a leap of faith and hope they’re close enough to grab onto the chain. I died at least four times attempting this otherwise simple jump.

Death is the last major drawback of Little Nightmares. Every danger in the world has the ability to kill Six instantly — every time she’s discovered and grabbed, every pit she falls into, and almost every mistake players make results in instant death. While the game is generous with checkpoints, areas where Six dies again and again bring the momentum of play to a screeching halt. Without giving anything away, this problem was particularly pronounced in a room where I had to avoid the long arms of The Janitor while also trying to figure out a way to kill the monster. Every time I merely touched the side of his arm, the game would wrest control away from me and trigger an animation where he ended my escape. The experience would be so much better if it allowed for players to fight back rather than simply ending play, especially when the slightest brush against an enemy results in a death.

Despite these flaws, however, the game is a joy to behold. The world of the Maw is fully realized and disturbing in all the right ways. From its lower bowels to its most decadent rooms, each area feels inspired and hand-crafted. It is the sense of place and the excellently-implemented foreboding atmosphere that saved this game for me.

I really wanted to love Little Nightmares, and in some ways, I do. It tells an intriguing, ambiguous story through a gorgeous, gothic-inspired art style. However, the moment-to-moment interaction suffers from loose controls, questionable physics, and cat-and-mouse sequences that quickly grow tedious. To its credit, the story begins and ends on strong high notes, making both a good first impression and a final lasting one. More art exhibit than enjoyable game, Little Nightmares nevertheless deserves to be in the same conversations as Limbo and Inside, if not because it tops them, then because it shares the same artistic and narrative ambitions. Rating: 8 out of 10

Disclosures: This game is developed by Tarsier Studios and published by Bandai Namco Entertainment. It is currently available on Steam, PS4, and Xbox One. This copy of the game was obtained via publisher and reviewed on PC. Approximately 6 hours of play were devoted to the single-player mode, and the game was completed. There are no multiplayer modes.

Parents: According to the ESRB, this game is rated T for Teen and contains Blood and Violence. The monsters in the game strangle, boil, and eat the main character, although the graphic violence is kept at a minimum. There is an image of a hanged man early in the game that may be disturbing for some players.

Deaf & Hard of Hearing Gamers: The game works fine without sound, and there are subtitles. It’s fully accessible.