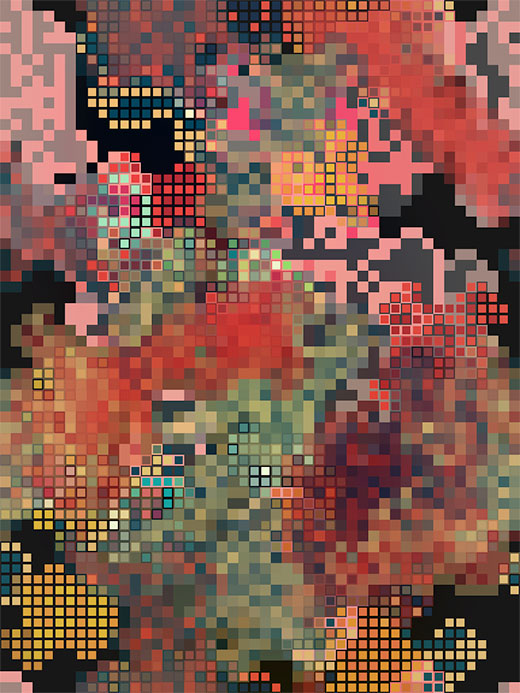 HIGH Nostalgic memories of website music from the mid-90's.

LOW Not much here besides bad pixel art and cheesy MIDI tunes.

WTF How is staring at a cellphone screen supposed to be soothing?

Let's be clear about one thing: Limitless is not a game.

This isn't one of those territorial, pedantic arguments where certain players like to claim experiences like Proteus, Dear Esther, or Gone Home aren't games. While positions may vary, those are resolutely games, or at the very least, game-like machinations.

Limitless, on the other hand, has no pretentions toward anything like an interactive experience. Instead, Limitless wants to offer something different, something few applications even attempt. It wants to offer the user something soothing. A calming moment. A digital garden of escapism, with MIDI-inspired musical tracks to lull the user into a sense of contemplation and nirvana, only the flowers in this garden are abstract pixel art, constantly warping, dissolving, and bleeding out. One wave of pixels cedes to the next wave, which seems to colonize the screen like bacteria overflowing a petri dish.

With sometimes mesmerizing combinations of randomly generated pixel art and blissful MIDI music, Limitless offers the on-the-go busybody a chance to stop in her tracks, grab a moment for herself, and refocus. A small button on the screen resets the visualizer to inspire new clouds of bits and bytes to spawn, while an elegant menu across the bottom of the screen allows the user to flip between music tracks, turn the music off entirely (an odd choice), or activate an "Auto mode" that prevents the screen from dimming and periodically refreshes the visualizer.

The in-game store seems to allow the purchase of new color sets and music, but the pre-release version does not display prices, so I was uneasy about exploring this content.

Finally, the user can capture a screenshot of the current pixel configuration at any time and export it to social media or convert it to a desktop wallpaper image, which is a nice feature for those who fancy themselves pixel art curators.

In a world made anxious and hectic thanks partially to ubiquitous mobile communication technologies, it's an ironic statement that a mobile application, of all things, purports to ease the uneasiness brought about by its own technological underpinnings. But I digress…

For people looking for ways to steal away a few moments during the day or for insomniacs that need calming music and inarticulate visual stimulation to sleep at night, Limitless might be worth checking out. For most people, though, the app is a cold solution to a problem that apps themselves partially create. Rating: 2 out of 10


Disclosures: This game was obtained via publisher and reviewed on the iPhone 4. Approximately 15 minutes of "play" was devoted to single-player modes.

Parents: Rating N/A. The game contains soothing chip tunes and abstract pixel art and should be appropriate for all ages.

Deaf & Hard of Hearing: Without the music, this app is really just an unimpressive visualizer.