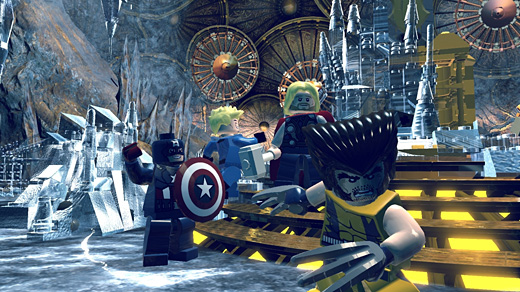 HIGH The first skydive from the Helicarrier to the New York streets below.

LOWGetting stuck in level architecture and having to re-load.

WTF Lego games don't let you be creative with Legos.

With a catalog of over 10,000 characters, the Marvel Universe (MU) is as big as the villain Galactus who devours entire planets in his free time. Accordingly, Traveler's Tales's Lego Marvel Super Heroes reflects the size of this universe it draws from by including over 200 of the most well-known characters from popular franchises such as the X-Men, Avengers, Fantastic Four, and others. Like the previous Lego games over the last decade, Lego Marvel Super Heroes

combines a Lego aesthetic with a powerhouse franchise, stitching the two together with child-friendly game design.

Coming off the heels of 2012's Lego Batman 2 and Lego Lord of the Rings (both epic games in their own right) Lego Marvel Super Heroes brings the same bombast fans have come to expect from the comics, cartoons, and newly vibrant Marvel Cinematic Universe. Indeed, with the films now the most profitable endeavor for Marvel, players can expect an overdose of Iron Man and the other Avengers, along with direct references to recent films like Iron Man 3. Notably, Marvel Super Heroes features a fully-realized New York for players to roam through, complete with recognizable landmarks like Avengers Tower and The Daily Bugle. From atop the Hellicarrier that floats above the equivalent of Manhattan, Marvel Super Heroes communicates an inspiring sense of scale and scope.

Despite including this hub world to explore between specific levels, Lego Marvel Super Heroes continues the legacy of simple, accessible Lego games that increasingly require little more than the constant smashing of preexisting objects and the building of new ones to progress in the level. On one hand, these games represent the best of family-friendly interactive entertainment. On the other, however, they sacrifice engaging, challenging design for rote play and silly gags.

In order to give an appropriate assessment of their quality, Lego games require the understanding of two wildly different players, here loosely defined as the child and the adult. The former is most likely to love what Lego Marvel Super Heroes has to offer, and the latter probably wishes that Galactus would just consume the gameworld and be on his way.

With every major hero in the MU chasing after Doctor Doom and his supervillain associates, Lego Marvel Super Heroes offers fans plenty of playtime with their favorite characters. Players can soar through levels with Iron Man, toss Captain America's trademark shield, or effortlessly swing around the city as Spider-man.

At any given time there are at least two characters to play as, supporting the encouraged co-operative mode. Sometimes the roster balloons to four or five, allowing either one or two players to switch characters on a whim. Each hero or villain has a somewhat unique set of powers, including elemental attacks like Thor's lightning or Human Torch's fire, and the strength of Hulk or Thing.

Switching between characters at specific times creates the heart of the gameplay in Lego Marvel Super Heroes, as each character offers powers effective on specific environmental obstacles. Wolverine and other clawed characters can activate specific switches, for example, and Invisible Woman, or spy-based characters like Black Widow, can turn translucent to circumvent surveillance equipment. Children may enjoy the very basic puzzle-solving aspect to this strategic switching, or they might simply like the ability to jump between their favorite super heroes at the press of a button. 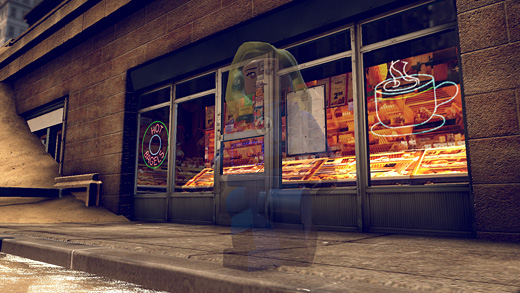 More than the mechanics, though, the real draw here for younger players is the goofy story and character interactions brought to life by wonderfully animated Lego figurines. Each character animates with a reduced, but exaggerated palate of their respective iconic moves. For instance, Hulk will often grab an enemy and recreate his infamous ragdoll beat-down of Loki from the Avengers film. Another notable example is Mr. Fantastic's movements, which allow his stretchy superpower to be fully exploited for comic relief, each of his limbs growing and shrinking as he thrashes across the battlefield.

Bit gags and puns accompany these over-the-top animations, especially during cut-scenes when each character usually has dialogue that references their own unique power. The exhaustively titled Doctor Doom's Doom Ray of Doom is just one example of this tiring wordplay. These are the kinds of lines that children end up repeating ad infinitum as they replay the game and rewatch the cut-scenes again and again.

The game encourages this kind of repetition, most obviously by placing certain items in levels where only specific characters can access them. Since the game dictates which characters are available the first time through, replaying allows players to choose the character required to access previously-unreachable items. Additionally, since unlocked characters still need to be purchased using the Lego studs collected everywhere in the game, the more times players complete levels, the more disposable studs they will have to purchase additional characters. Of course, like previous Lego games, unlocking everything in the game will take dozens of hours and require childlike determination to accomplish.

With hundreds of iconic Marvel characters to choose from, incentivized replay value, and the possibility of imaginative super hero and super villain team-ups, there is a lot here that children would probably love. Unfortunately, many parents buy these games to play with their kids, and an adult player might have a very different experience with Lego Marvel Super Heroes.

The grand scale of the New York hub world presented in Lego Marvel Super Heroes should impress even the most jaded adult Marvel fan. The first time the player leaps from the Helicarrier deck and skydives down to New York below is unexpected and exhilarating, especially as the full scope of the city comes into focus from a bird's eye view. This sequence, oddly slotted into a Lego game, has the feeling of something much bigger and more ambitious, and recalls the fact that there has yet to be a Marvel super hero game on par with Rocksteady's Batman efforts.

While children might enjoy the extensive cast of characters, they ultimately don't translate into much variety. Other than selecting a hero with the right power to get past the obstacle at hand, who the player controls really doesn't matter. All attacks are more or less effective in dispensing with the countless enemies who swarm the heroes with the harmfulness of gnats.

Moreover, with infinite lives, there is no danger of failing at any time during a level. Enemy encounters become meaningless and the otherwise gargantuan boss battles become waiting games, as the boss eventually provides the necessary Lego bricks to build whatever the player needs to win. The game becomes about moving forward just to move forward, not to see the next challenge or to get one step closer to finishing. Despite the number of characters, the gameplay is so mindless and rote that even the boundless variety of skins and powers doesn't make replaying any part of the game appealing. 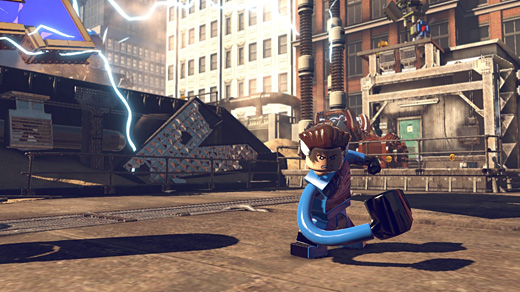 As noted above, the animations are clever, sometimes even adorable, but after watching Hulk perform the same ragdoll slam move from The Avengers for the fifth time, all the referential pleasure evaporates. The repetitive moment becomes a tedious animation that, while only a few seconds long, starts to feel like a nuisance. Likewise, the endless puns from the villains will probably entertain most children, but will leave their adult co-op partners groaning.

Then there are the broken parts. The position of the player character is unfortunately important to interacting with multiple environmental switches. As a result, sometimes it feels like the game has glitched because it will not allow the player to perform the contextual action she knows she has to do, but if the character moves a few millimeters to the left or right, the option to interact suddenly becomes available. It feels arbitrary and annoying. Similarly, loose level architecture sometimes results in characters getting caught in unexpected places, with the worst case scenarios trapping a character so that not even respawning frees the hero from their glitched position. Such a case necessitates exiting the level and loading a save, or if the player has not saved at one of the frequent kiosks, she is forced to endure the same mind-numbing sections over again.

Rather than creating an experience that pleases diehard Marvel fans, creative Lego enthusiasts, and avid game players, Lego Marvel Super Heroes does a disservice to all three communities. Marvel fans will find only a simplistic adaptation of their beloved mythos. Lego enthusiasts will find no room for creativity outside a basic character creator. People who love games will find only a virtual world free of consequences, challenge, and thoughtful design.

Ultimately, the Lego games are built with young children in mind. They feature simple, repetitive gameplay and exploit popular franchises that put more emphasis on who the player is controlling rather than what he or she actually gets to do. Children will probably love stepping into the shoes of their favorite Marvel heroes, re-playing levels, collecting the millions of Lego studs, and slowly unlocking all the various faces from the Marvel Universe. Taken on its own, though, Lego Marvel Super Heroes

does not offer much that an adult player will find engaging, let alone competent. Nonetheless, some parents might well enjoy the comic-inspired ride, if for no other reason than to see what combination of heroes and villains Traveler's Tales introduces next, or maybe to just spend some quality time with the most important people in their lives: their children. Rating: 5.0 out of 10.

Neither pack offers anything that adds notable value to the core experience. Though it might be interesting to stalk around New York as the Mad Titan Thanos, these new characters are little more than new skins for old character types, since they all feature powers similar to heroes or villains already included in the game.


Disclosures: This game was obtained via publisher and reviewed on the Xbox 360. Approximately 12 hours of play was devoted to single-player modes (completed one time) and 0 hours of play in multiplayer modes.

Parents: According to the ESRB, this game contains cartoon violence. For example, players punch, kick, and fire projectiles at enemy characters. When the enemies die, they burst into Lego pieces. Additionally, players can run over bystanders on the open streets of New York, also resulting in them bursting into Lego pieces. These scenes may upset sensitive parents.

Deaf & Hard of Hearing: Sounds are not necessarily required to enjoy this experience.