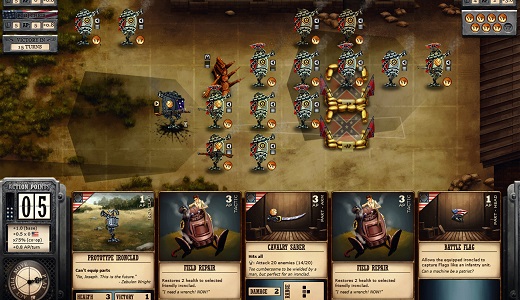 HIGH Camping an armored chassis on the enemy's side of the board, decimating it.

WTF The aesthetics and humor feel like this game was built by the Penny Arcade guys. It wasn't.

In this alternative history, both sides of the war use steampunk technology and automaton soldiers to decide the fate of the country. Vibrant comic strips create a loose narrative that sutures the game's strategic missions together, but the characters and story are largely disposable.

The real draw here? The unique mechanics. The eclectic mix of influences and game styles in Ironclad is inspired. However, the uneven difficulty spikes, lack of a clear tutorial, and player dependence on the luck of the draw mean this lumbering, mechanical strategy title feels a little rusty.

In the main campaign, players progress from one mission to the next along a path that spans the length of the country. Before each mission, players assemble a deck of 20 cards made up of units, weapons, maneuvers, and support cards. While the initial selection of cards is small, players unlock more by completing missions. Additionally, each mission has level-specific goals that unlock even more cards, giving good motivation to go back and replay previous levels.

The cards are split among a number of factions, each with its own unique set of units and powers. However, players can only combine two factions at any one time, so figuring out which factions work well together for specific missions is key to success. In total, Ironclad features four campaigns—one main and one ancillary available from the start, and two additional campaigns (including a tour of Europe) unlocked after completing the game.

Missions consist of marching a certain number of units, called Ironclads, from the left side of the screen to the right on a four-by-nine, grid-based battlefield. Although there sometimes are alternative ways of scoring points.

Players select unit cards from a scrolling list along the bottom of the screen and then choose which of four rows to place it on. Ironclad's units include various sized mechs and an array of different soldiers. When placed on the map, these units appear on the far left side of the screen. Units automatically walk to the right at a fixed pace each turn until stopped by the player manually, or until they encounter an obstacle or an enemy. At any time, the player can use special cards to arm, upgrade, or maneuver units.

Selecting the right unit for the situation is only part of the equation. Players must also carefully choose which weapon to arm the Ironclad with from a range of options, including muskets, revolvers, shotguns, cannons, and sabers, each with their own range and power of attack. For example, while sabers are killer up close, cannons are better for ranged combat. 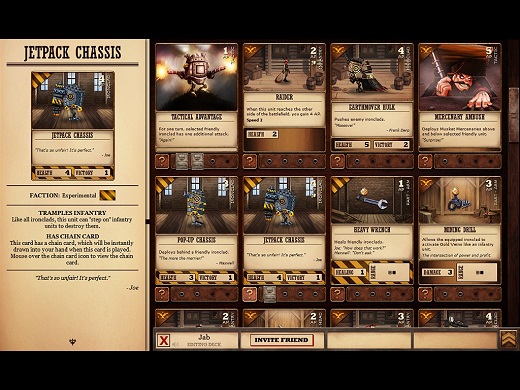 Units can also be upgraded to better withstand attacks, to bolster the stats of other units, or to capture points on the map (usually an ability only infantry possess.) Finally, since each unit generally moves in a straight line across the grid, maneuver cards allow the player to slide units into new rows for defense or attack purposes, a key move that can shift the tides of battle.

Every card in the game has an action point requirement, so players need to prioritize card deployment based on available point stocks. Managing action points means thinking seriously about which units should go out first and where, what upgrades are deployed, and what support cards are played.

Ironclad also boasts cooperative and 1v1 competitive multiplayer modes. Unfortunately, cooperative play is limited to friends only, so players can't join up with random players. Furthermore, I was unable to test the competitive multiplayer since even after 10 minutes of waiting, the matchmaking system could not locate an opponent. This is perhaps a sign of the game's very small online community, so while these features are welcome, players should realize the value with Ironclad rests in its four single-player campaigns.

Unfortunately, despite its seemingly-simple mechanics, Ironclad Tactics can be quite frustrating at times thanks to an erratic difficulty level that's sometimes yawningly easy and sometimes maddeningly frustrating. These random spikes in difficulty derive from a combination of related problems.

First, Ironclad does a poor job of explaining its mechanics to players. While it has a few tutorial missions, even these are poorly explained.

Second, like any deck-building game, a lot of the player's success depends upon the luck of the draw, and rounds can quickly go sour if the wrong combination of cards comes up. This problem is slightly mitigated with the option to keep potential lost cards for future play. However, to do this, players have to burn a precious action point.

Third, many maps have specific objectives or unique mechanics that are not explained until the player has to deal with them. For instance, rather than getting a certain number of Ironclad units across the map, a mission might ask the player to hold mortar or flag points, or destroy a specific target. This leads to trial-and-error gameplay that wastes time, especially since the mission briefing before each battle should prepare players for the specifics of each stage.

For fans of strategic collectible card games, Ironclad Tactics will provide hours of entertainment and offers the ability to go deep into its deck-building mechanics. For more casual players, the game's difficulty spikes and deck micro-management can quickly feel overwhelming. Despite its promising qualities, Ironclad's list of problems clink and clank too loudly not to notice. Rating: 7 out of 10


Disclosures: This game was obtained via publisher and reviewed on the PS4. Approximately 7 hours of play was devoted to single-player modes (the game was not completed) and 0 hours of play in multiplayer modes because no opponents were available.

Parents: According to the ESRB, this game contains violence, blood, suggestive themes, use of alcohol and tobacco. The cartoon violence featured in the game include robots blowing up and human soldiers getting crushed to death with a splash of blood. These are not especially graphic but might be inappropriate for younger players.

Deaf & Hard of Hearing: Sound is not necessary to enjoy this game.