A Stroke Above Par 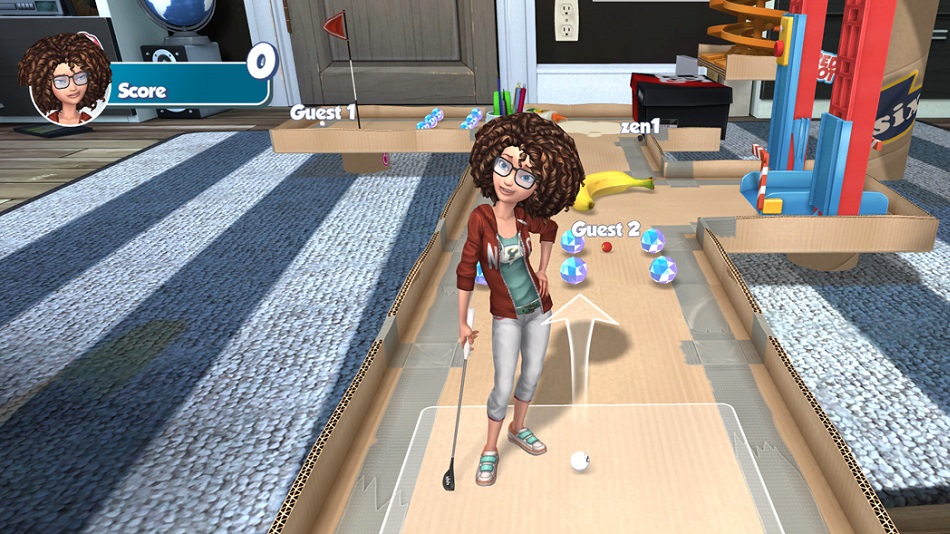 LOW A slew of terrible user-generated levels on quickplay.

Infinite Minigolf is a cartoonish miniature golf game from Zen Studios that focuses on user-generated courses to create a near-infinite amount of content. Although mechanically simple, the game exudes character and style while also providing one of the more content-rich PSVR experiences available today.

The game features small minigolf courses across three central settings including a boy’s bedroom, a cemetery, and a Christmas wonderland. Each of these areas features four tournaments with pre-designed courses and three difficulty levels. Unfortunately, players are forced to start at the casual difficulty before unlocking more challenging (and engaging) higher difficulties. This choice certainly promises that players will return to the same courses again and again, but the slight differences between difficulties doesn’t justify this forced progression system.

Other than tournaments, players can go through courses online in one of several modes, create levels themselves, or choose the quickplay option that cycles randomly through user-generated content. While many of these user courses are awful and probably created just to earn a corresponding trophy, some users have actually created courses that rival the developer’s.

Outside of virtual reality the visuals are serviceable, but I highly recommend using PSVR. In VR, the cartoon aesthetics combined with skillfully-constructed environments and high-resolution textures create some of the most vibrant and immersive worlds for the platform. Although the areas are largely backdrops, they do add a lot to the experience. The christmas-themed world is especially delightful thanks to its upbeat holiday-inspired music, and the bedroom perfectly captures the tropes of boyhood including pizza, a pet dog and remote-controlled drones.

As with most minigolf titles, the core of Infinite Minigolf is straightforward. Using the DualShock 4, players can adjust the direction they putt the golf ball and use the right thumbstick to control the power of their stroke. While an option to actually swing the putter using a Move controller in VR mode would have been nice, being limited to a DS4 means the game becomes a relaxing couch experience. 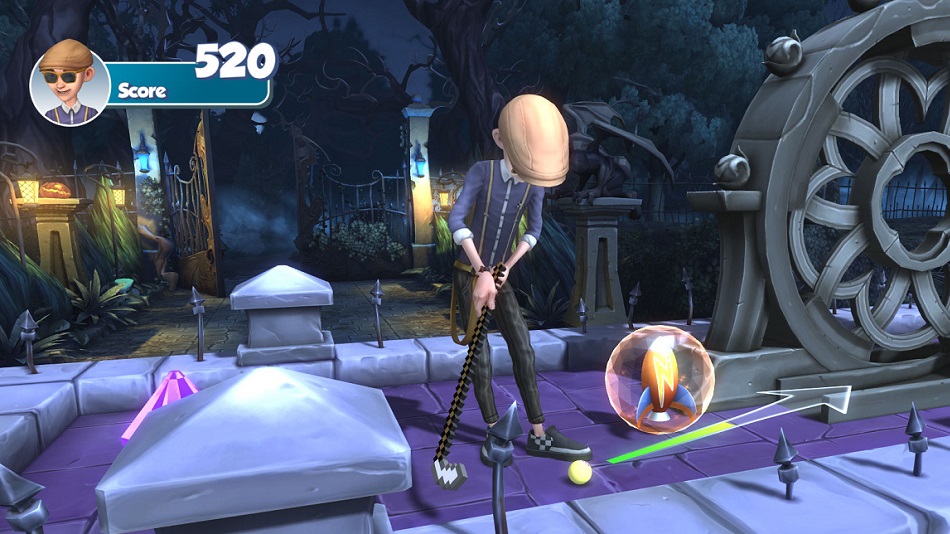 Variations on putting come in the way of environmental aids and power-ups in the courses themselves. These include rockets to speed up the ball, joysticks to give the player direct control of the ball, and springs to jump the ball over gaps. Similarly, each tournament features an NPC that players can use to redirect the ball. For instance, in the cemetery, if players hit the ball into a scarecrow figure with a pumpkin head, he’ll use his cane to shunt the player’s ball toward the hole.

Players earn coins and tickets by completing tournaments and an ever-shifting series of goals. Coins can be exchanged for more tickets, and these can be used to purchase aesthetic upgrades including hairstyles, clothing, and accessories. However, unique tickets are tied to every aesthetic upgrade, and I found myself awash with tickets to buy pants but rarely encountered tickets to purchase new hair. While it’s just a small nuisance, I would have preferred tickets that could have been used to buy whatever upgrade I fancied.

When players get tired of premade courses, the course editor provides a robust set of tools for building original ones. The devs give access to almost all of the assets they’ve used and all of the basic course elements such as straightaways, curves, hills, dips, loop-de-loops, power-ups, environmental obstacles, and basic geometry. After briefly familiarizing myself with the creation controls, I was able to quickly create an engaging course, test it, name it, and share it via on the online servers for others to try.

Although it offers a simple premise and equally simple mechanics, Infinite Minigolf actually ends up being one of the PSVR’s more promising titles. The tournament content is engaging despite having to play through each difficulty, but the real future of Infinite Minigolf depends on an engaged community of creators. The tools are here, but the devs will have to come up with a method of purging the servers of one-slab, featureless courses if they want people to continue to build on the “infinite” amount of content suggested in the title. Rating: 8 out of 10

Disclosures: This game is developed and published by Zen Studios. It is currently available on Steam, PS4, and XBO. This copy of the game was obtained via publisher and reviewed on the PSVR using a PS4 Pro. Approximately 4 hours of play were devoted to the single-player mode, and the game was not completed. I could not play the robust multiplayer options before the game’s release, but the course-sharing features work wonderfully.

Parents: According to the ESRB, this game is rated E for Everyone. There is no questionable content here, just cute visuals and mini golfing.

Deaf & Hard of Hearing Gamers: Sound isn’t necessary. The game does not feature any significant dialogue.