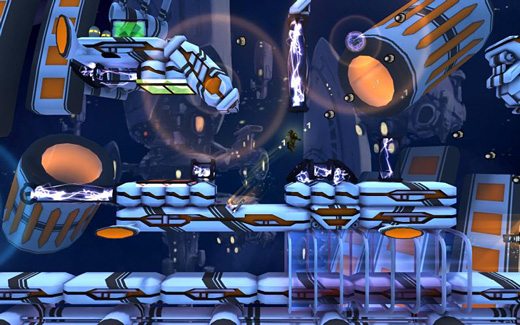 Gradually, the shipwrecked scavenger begins to collect scrap metal. Moving ever faster, the interstellar traveler ricochets off surfaces, activating his patented GRAV suit to maintain momentum in the practical vacuum of space, grabbing floating debris and avoiding electrified surfaces. He moves almost like a blur at the apex of bounding off walls at odd angles and traversing a galactic junkyard the way an electron orbits an atom's nucleus… until he comes to a stop, suddenly, and has to begin again. He's slow at first. He's building inertia.

Inertia is a gravity platform game from Red Fly Studio for iOS and Android devices. As the lost deep space scavenger Hermes, players have to use a special GRAV suit in order to collect scrap and rebuild his crashed ship, part by part. Hermes himself looks like an outer space version of the Big Daddy from Irrational Games' BioShock, and while he lumbers slowly forward at first like the titular undersea behemoth, the player is eventually able to increase and maintain momentum in order to dart around the sometimes labyrinthine stages until brought to a stop, either by an obstacle or by choice.

The player has to worry about four on-screen buttons in Inertia. Left and right indicate the direction the player can move Hermes. Of course, as a platformer, there is also the requisite jump button. Yet the fourth button, what I will call the "inertia" button, is really what sets this game apart from other platformers, for better or for worse. When headed in any given direction, whether jumping, moving left or right, or falling, the player can push and hold the inertia button in order to enter a zero gravity state, effectively maintaining direction and speed.

By bounding off surfaces and strategically releasing and pushing the inertia button, the player can build speed, change direction in mid-air, and perform all kinds of acrobatic feats. Traversal itself is impressive, but the main goal in each of Inertia's levels is to collect small bits of junk metal and ultimately reach the end of the stage. In the right hands, Inertia can look like a beautifully designed platformer with levels that reward skilled maneuvers and offer optional objectives that make returning to the game's dozens of stages worthwhile. Unfortunately, the kind of mastery Inertia seems to expect of its player does not come easy. 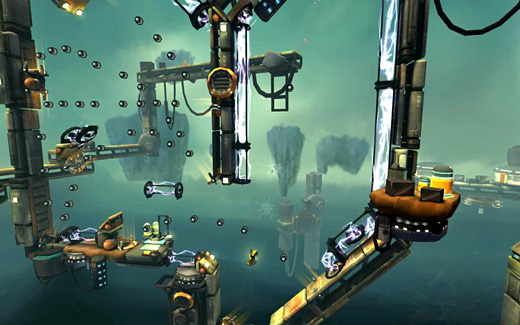 A practical confession: I'm just not very good at this game.

This is especially true in later stages, when new gravity-related environmental obstacles are added. A lot of the delicate balancing between holding the inertia button and bouncing between attracting and repulsing energy waves feels like dumb luck when Hermes finally manages to squeeze through a difficult corridor unscathed. In other words, prepare to die a lot, and in ways that simply do not teach the player anything about how to overcome the current impediment.

I know there is a technical and deep platformer in here somewhere; I just haven't been able to find it with my fat fingers and limited skills. Thankfully there are generous checkpoint areas throughout each level, and generally if the player just passed a rather arduous section, a checkpoint will be waiting. So while on one hand these levels are designed for speedruns—one of the several optional objectives—they also cater to people like me, people who just don't understand how to keep up with the sense of blinding speed this game is capable of delivering.

For me, the controls work better on the smaller iPhone than on the larger iPad. The game also lends itself more to the intimacy of the small screen, although the visuals shine in the HD iPad version. Ultimately, either version provides the same strengths and the same weaknesses.

Featuring over 10 planet clusters (worlds) spread across three galaxies, Inertia easily provides well over 40 levels, including bonus levels, for those willing to collect enough scrap to unlock the later stages or buy the tenth planet cluster through a micro-transaction. Each level features a fantastic sense of speed and a complex design that invites the player to experiment with multiple playthroughs. By the game's later stages, the designers have really mastered implementing the kind of architecture that allows their gameplay to shine. Again, it is a shame that while I can recognize the intelligent design, I cannot appreciate it without hiccuping my way through each level.

More than most small mobile games, Inertia is a lonely experience. It can offer the right gamer an excellent and unique platformer on the go, but those looking for a quick thrill without a steep learning curve might want to maintain their momentum and breeze past what might arguably become a sleeper hit for the mobile platform. Rating: 6.0 out of 10.


Disclosures: This game was obtained via publisher and reviewed on the iPad and iPhone4. Approximately 6 hours of play were devoted to the single-player mode, and the game was not completed. There are no multiplayer modes.

Parents: The ESRB does not rate iOS games. The App Store rates Inertia 9+ for infrequent/mild cartoon or fantasy violence.

Deaf & Hard of Hearing: The music sets the appropriate mood of desolation and isolation in space, but it is not necessary for the enjoyment of the game.