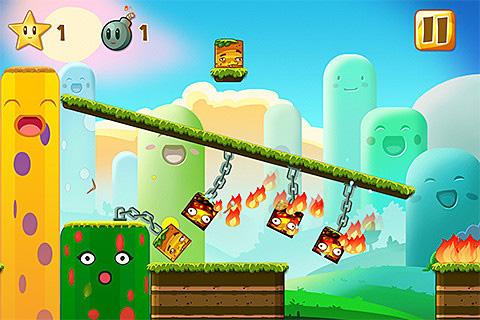 WTF The unnatural sense of joy embedded in the landscape.

There's something about iOS games and demolition that go together, like peas and explosive carrots. The formula is familiar… but not yet fatigued.

Happy Hills is a physics-based puzzler about bombing obnoxious blocks off the top of not-so-happy hills languishing under their weight. This is accomplished by easily tapping the screen where players want to detonate an explosion. In order to get a more nuanced shot, players can hold a finger to the screen and determine the best spot to detonate based on trajectory and velocity indicators that appear. Once liberated of blocks, the hills rise skyward and recapture their eerie sense of joy. The changing heights of adjacent hills become part of the puzzle-solving as the game progresses.

The blocks themselves come in several varieties. What start as simple concrete and wooden blocks gradually become more perplexing steel, chained, balloon, and ice blocks, among others. Each block has a weakness and a particular strategy involved in successfully dethroning them.

The game complicates its simple premise by including environmental obstacles and hazards specific to certain block types. To earn all the available stars in any given stage, players must carefully aim shots to propel certain blocks into the appropriate trap. For example, dopey-faced wooden blocks do not get along well with fire. Introduce the two to each other, watch the poor wooden guy sizzle in the flames for a moment, and the star for that particular block will be yours. Bonus levels are unlocked by collecting the requisite amount of stars.

In later levels, the puzzle element of the game really starts to shine and the game shifts from an often mindless point and shoot scenario to a diabolically engineered Rube Goldberg machine waiting to be deciphered. 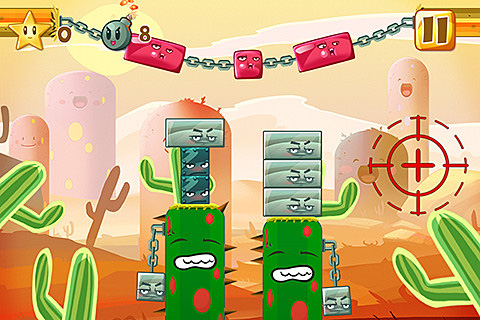 Like many modern iOS games with limited marketing budgets, Happy Hills allows the player to tweet or Facebook their accomplishments after every stage. Moreover, every so often the game will offer you a special coupon code after completing a stage. Evidently, these can be redeemed via Facebook, an option this reviewer could not bring himself to care about. Also of potential interest to the more community-minded, achievements are included for both Game Center and OpenFeint.

Graphically, the words colorful and vibrant come to mind. The backgrounds, largely comprised of distant hilltops in varying stages of elation, look ripped out of 16-bit era Super Mario World. I almost expect to see a small corpulent plumber bounding from one chirpy mound to another. Buttery clouds gently drift by, mist envelops the far-off valleys, and an egg yolk sun glows in the sky.

To borrow a word from games scholar Jesper Juul, this game has juiciness, a term best understood as a large amount of positive feedback for almost all player actions. This positive feedback comes in the form of the animated expressions on the blocks wincing with each explosion, their humorous tumbling through the environment, and the congratulatory eruption after successfully completing a level. A cheer erupts, a baby giggles, and fireworks burst in all directions—it's a jubilee akin to beating a stage in PopCap's Peggle. The simple act of touching and pointing in this game makes you feel like a Herculean savior.

Of course, not all is sunny, even in Happy Hills's creepily cheerful world.  The game does not auto-adjust the screen to the orientation of the device. Instead, this has to be done manually in the options menu. Unfortunately, this is a flaw shared by many games in the App Store. Also, although mild, waiting becomes an issue. Two-second load times between stages and menus may sound acceptable, but for an iOS game played on the go for only minutes at a time, two seconds add up.

Finally, some of the game's cleverest and most enjoyable puzzles are locked away in tantalizingly-teased level packs that cost extra to access. Great puzzle design should be rewarded, but it feels as though the developer purposefully locked some of the game's best material behind a wall of paid content. What's more, the ads for this content bombard the player as soon as the world map is entered, a placement that ends up feeling either annoying or desperate.

For a mere 99 cents, it's hard not to recommend Happy Hills to those looking for a piece of disposable, bite-sized entertainment. It doesn't redefine the mobile gaming space, but it utilizes all the qualities that make the space successful. Cute visuals. Juiciness. Social networking features. Clever puzzles. Like peas and exploding carrots. Rating: 7.0 out of 10.


Disclosures: This game was obtained via publisher and reviewed on the iPad and iPhone 4. Approximately 4 hours of play were devoted to the single-player mode, and the game was completed except for the paid extra content. There are no multiplayer modes.

Parents: This game was not rated by ESRB. Happy Hills is appropriate for people of all ages. It features cute, cartoon graphics and mild violence in the form of exploding, burning, and drowning bricks.

Deaf & Hard of Hearing: No sound is necessary for the enjoyment of this game.