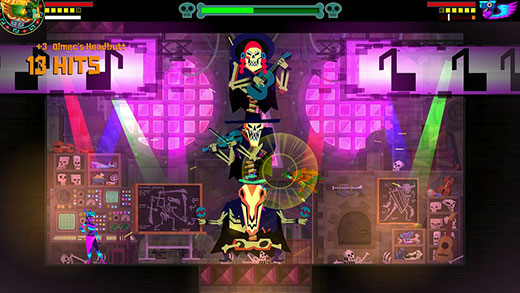 HIGH The dozens of references to games and gaming culture.

LOW Not many incentives to seek out collectables.

WTF The dead wanderer from Journey on the mountaintop.

should be celebrated for being one of the few games in recent history, let alone the history of the medium, to star a Latino protagonist and explore aspects of Mexican culture, albeit through a reductionist, cartoon perspective. To its credit, the game should also be celebrated for its beautiful 2D art, personality, and fluid movement and combat systems.

After being killed by the undead horseman Calaca, humble farmer Juan is resurrected as a Luchador champion and sets out on a quest to save the President's daughter and the world. Gaucamelee's story is serviceable, even charming at times. It manages to be conventional and self-aware, although it doesn't use this self-awareness to subvert expectations enough. For example, it's still a story about saving a damsel in distress. As a result, more compelling reasons to play are the excellent level design, traversal and combat mechanics.

As explained in Brad's review of the first version, Gaucamelee is a 2D combat and exploration game that utilizes a sprawling, interconnected map punctuated by boss encounters and occasional upgrades that unlock previously unreachable areas. Rather than rehash the basics, I'll stick to evaluating the new features Super Turbo edition brings to the table, and there are many.

For example, DrinkBox had now made masked heroine Tostada selectable by the first or second player after the game's initial sequence. While it may have been nice to have this feature from the very start of the game, this first sequence is short enough to blow through in a minute or two. Tostada is still not written convincingly into the game's story, though, so playing as her doesn't significantly alter the experience.

Other additions include life bars now appearing over enemy heads to give players an indication on how close they are to defeating their foes, and the inclusion of silver coins to use towards purchasing additional costumes. These costumes offer risk and reward skill sets (more damage but less defense, etc.) which advanced players will enjoy.

DrinkBox has also bolstered the already-solid combat mechanics with a new "Intenso" mode. Once activated, Intenso briefly strengthens all offensive moves, allowing players to quickly dispatch groups of enemies. This mode can only be activated when a power meter is filled by defeating enemies, making it useful in a pinch but not something players can spam. While purists may lament the change to the original balanced and nuanced combat system, the developers have redesigned many encounters to integrate Intenso mode, making it almost essential in some instances.

Finally, DrinkBox has also added new enemies, new areas, and a new boss into the main storyline, giving players that have completed the game even more reason to pick it up again. The new enemies capitalize on the tight, combo-based fighting system, and players will have to deal with teleporting foes in addition to the shielded and inter-dimensional enemies from before.

Oddly, despite all of this new content, there's still no convincing reason to seek out the collectables, purchase all the character upgrades, or even play some of the additional DLC challenge areas after the main quest has been completed. While each of these goals adds playtime and achievements, they're forgettable compared to the meaty and focused main quest.

Another potential critique—and I'm really reaching here—is that while the world of Gaucamelee features lovingly-crafted art, vibrant colors, and unique personality, the levels lose their distinctiveness over the course of the game, with many areas feeling like nothing more than corridors for the player to run through on the way to the next checkpoint. This sameness isn't helped by the mariachi-inspired soundtrack, which tends to hold a similar mood throughout the game.

Por último, DrinkBox improved an already-solid game with loads of new content and even more options. While it might not be better than some of the classics of its genre, Gaucamelee! Super Turbo Championship Edition

still offers a plump piñata that delivers plenty of candy for players willing to break it open. 8.5 out of 10


Disclosures: This game was obtained via publisher and reviewed on PS4. Approximately 7 hours of play was devoted to single-player modes (completed 1 times) and 0 hours of play in multiplayer modes.

Parents: According to the ESRB, this game contains: fantasy violence, mild blood, suggestive themes, and use of alcohol. Players punch, kick, and throw skeleton enemies. One flame-headed character abuses alcohol. Otherwise, most of the action and representations in this game are relatively benign.

Deaf & Hard of Hearing: Music and sound are not necessary to enjoy this game.