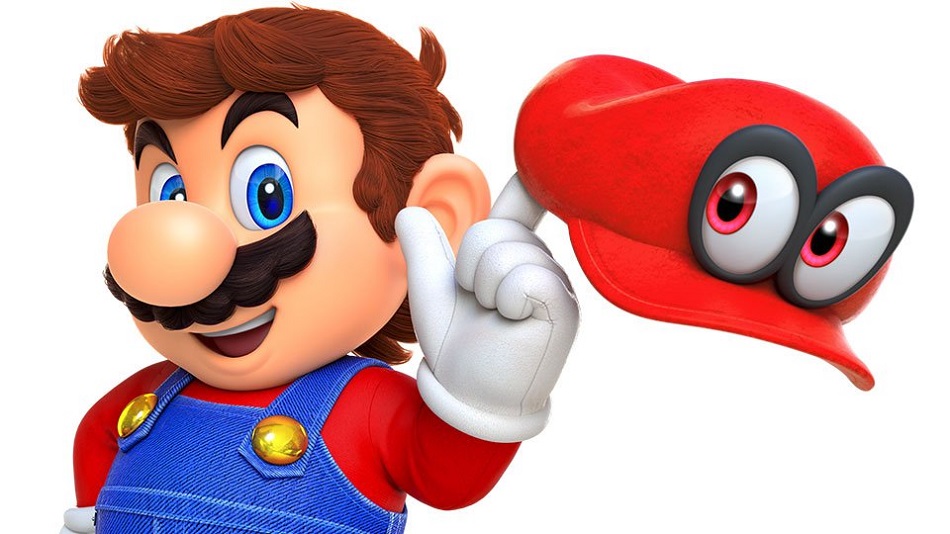 Launching this October, Super Mario Odyssey brings the tried-and-true 3D Mario formula to the Nintendo Switch, continuing the tradition of making Mario a flagship title. My short time with the title at E3 2017 suggests an experience with tight controls, beautiful worlds, and unparalleled whimsy.

The demo that Nintendo provided to journalists at E3 consisted of two levels — a Latin-inspired desert world, and the now infamous New Donk City.

The desert stage offered the open, yet guided experience players have come to expect from titles like Super Mario 64 and Super Mario Sunshine. Upon starting the stage, the demo had tutorial signs that explained Mario’s new ability to toss his hat like a boomerang. Mario also has the ability to freeze his spinning hat in place to inflict ongoing damage, and to spin the hat around him in a circle to take out a group of enemies. These moves could be accomplished either with gestural controls or through button presses, and both methods work well. 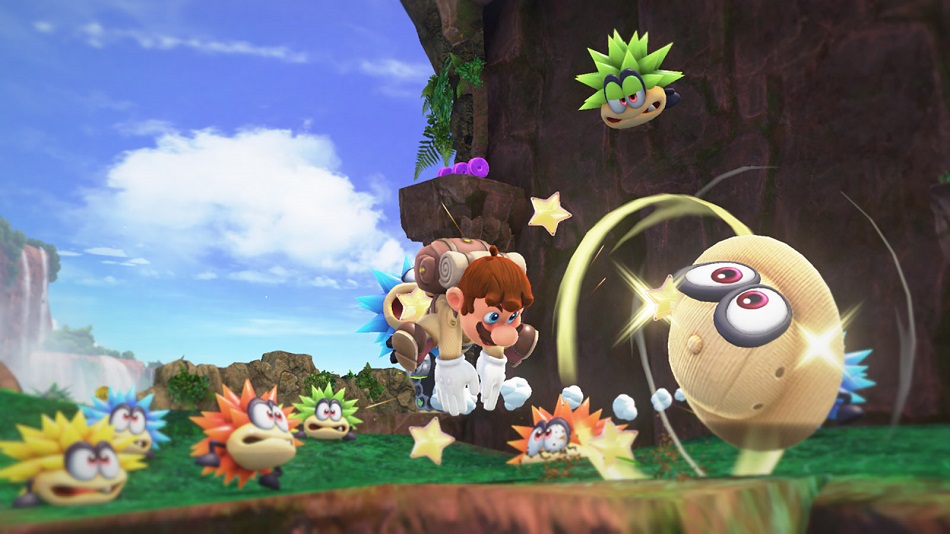 The rest of Mario’s moveset remains largely untouched from the days of Mario 64. Players can long jump, triple-jump, butt stomp, perform a sudden reverse-of-direction backflip, and every other trick they remember from previous iterations of the franchise. After learning the controls, I ran through the sand towards a distant structure. Along the way I destroyed crystals that jutted out of the red earth and collected coins. Rather than stars, Mario Odyssey apparently will have players traveling from world to world collecting half-moons. At least from my short time with the title, these seemed to be the reward for finishing quests.

Players can now accessorize Mario by entering stores in each themed level. These stores offer alternative outfits such as a safari gear or a tuxedo, among others. Although these changes seem to be only cosmetic, it does offer players another whimsical feature to mess around with between visiting worlds and collecting half-moons. 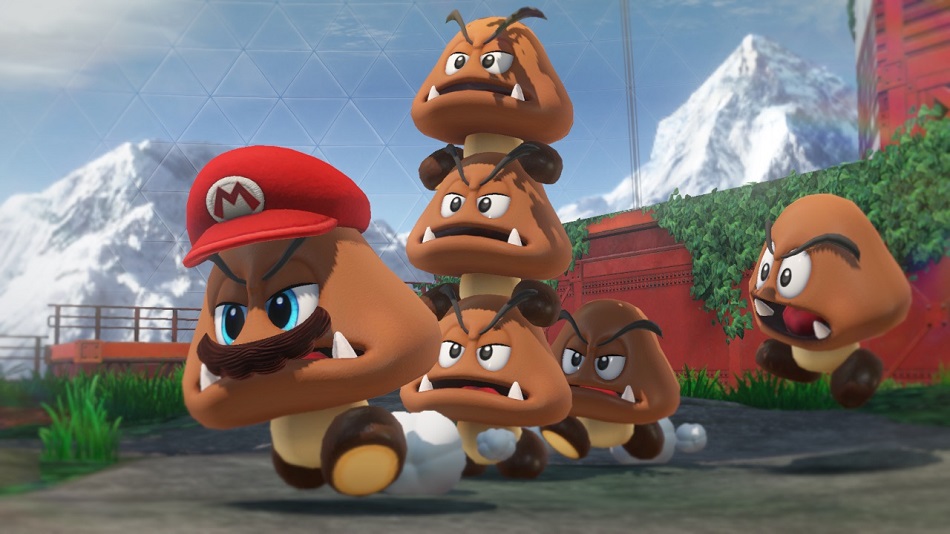 I received my first moon by scaling a pyramid-like structure in the desert world. As I ascended the pyramid, I also encountered another new ability of Mario’s — he can now possess most enemies in the world by tossing his hat on top of their head. For instance, I was able to possess Bullet Bills that were fired from nearby cannons. As Bullet Bill, I was able to fly across parts of the level to skip platforming sections or collect items that were out of reach for normal Mario.

Another neat gimmick was a warp pipe that transformed Mario into a nostalgic 2D sprite and allowed me to run along the surface of a wall. Eventually, using this feature, I ran around and up a tower at the top of the desert pyramid to collect another half-moon reward. After accomplishing that goal, I was off to New Donk City.

To be blunt, New Donk City is the biggest aesthetic mistake the 3D Mario games have ever made. In a bizarre creative decision, Nintendo has opted to render the city in pseudo-photorealistic 3D while having Mario maintain his traditional cartoonish proportions. The stylistic clash is distracting. The result is an unsightly juxtaposition I haven’t encountered since the original Sonic Adventure on Sega’s Dreamcast, when the squat, blue hedgehog ran around a city with a similar visual design. 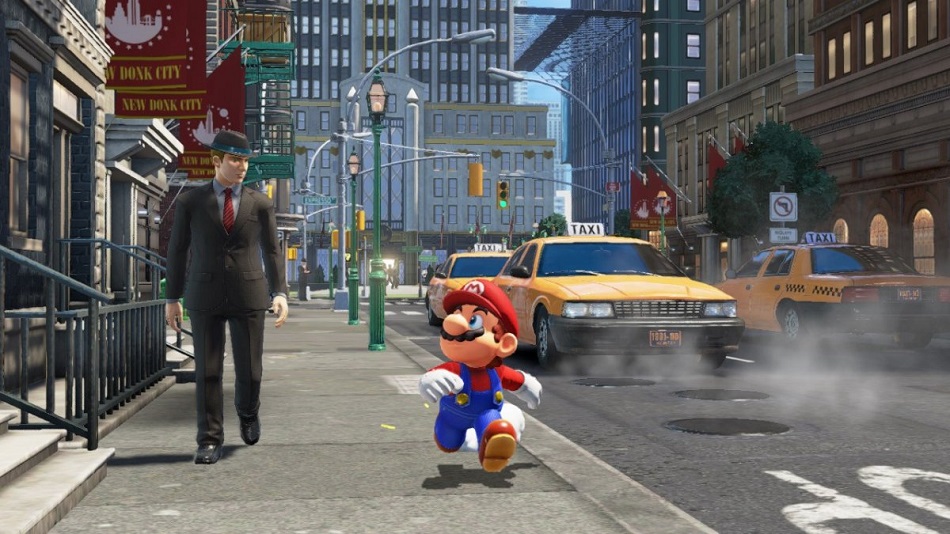 The cast of characters in Mario games have always shined thanks to their wacky-yet-unique designs that mesh with the general aesthetic of the Mushroom Kingdom. Whether the citizens of Isle Delfino in Sunshine or the Lumas of Super Mario Galaxy, these supporting characters never disrupt the visual palette we associate with Mario. In contrast, the citizens and world of New Donk City look like Mario has somehow warped into a different franchise.

On the other hand, the architectural design of New Donk City maintains the clever platform puzzle-solving for which the series is known. Using my hat again, I was able to possess wires and become a spark of electricity to travel up, down, and across to reach the rooftops of various buildings. My main goal was to find and assemble a band for a big event planned by the city’s mayor. I was able to collect the members of the band in any order I chose, and finding each meant exploring around every corner and climbing every building in the small city area.

It’s almost impossible to know what countless secrets Super Mario Odyssey has in store for players based just on the two stages I played. The gameplay is as tight as ever, and exploring the creative worlds of Mario retains the same magic. The mechanics associated with Mario’s new hat are solid, and I only scratched the surface of Mario’s possession abilities, which I can imagine are explored to gleeful degrees in the final game – one recent trailer even shows Mario possessing a T-Rex.

The only blemish of this experience is the realistic aesthetic of New Donk City. It’s an eyesore that just doesn’t mesh well with the style established in countless Mario games. Hopefully, New Donk City is an outlier in what promises to be an otherwise delightful new iteration in the expertly-designed Mario franchise.

Super Mario Odyssey releases for the Nintendo Switch on October 27, 2017

This article was produced in cooperation with God Is A Geek, and also appears at their site.