All the World's a Stage… 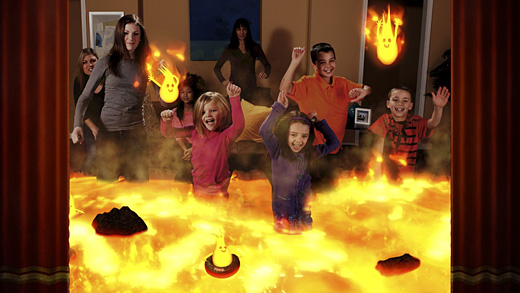 WTF Recreating the end scene from Terminator 2 with a lava-flooded living room.

While open world games like Grand Theft Auto have touted their dual ability to be both a narrative game experience and a virtual playground for over a decade now, few have actually allowed the user to physically engage in the act of "play." Certainly, with the popularization of motion controls like the PlayStation EyeToy and later the Nintendo Wii, games and the physical act of playing them have started to intertwine more regularly. The thing is, how many of these experiences actually feel like play? Play should be about exploration and imagination, movement and discovery, or just something silly or cathartic.

Play should be something like the Kinect game Double Fine Happy Action Theater for the Xbox 360.

invites players to participate in an assortment of experiences that range from goal-oriented to free-form self-discovery. While difficult to categorize, I would describe the games as falling within one of three types.

Play should be about testing a person's comfort zone.

Four of the scenarios seem to encourage a form of dance from the player. These include a kaleidoscope presentation, a music video that speeds up or slows down depending on the player's movements, a delayed silhouette aesthetic that forms of trail of the player's actions, and a disco-inspired dance party where the player gets to groove with characters from past Double Fine games like Costume Party and Psychonauts. These characters are all paper cutouts reminiscent, for those who remember, of the style featured in the PlayStation One classic PaRappa the Rapper. 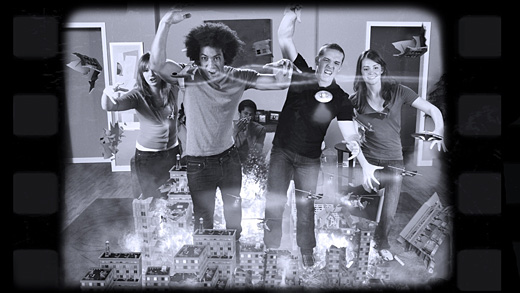 With appropriately active music and just enough player input, these dance scenarios provide a great context for inane gestures and clumsy cavorting. Ostensibly meant for a younger audience (just like the experience as a whole) the dancing sets the mood for a silly, spontaneous time that could work just as well at an adult party as during an afternoon with the kids.

Play should link the pretend with the actual.

The majority of the 18 scenarios are more or less small playgrounds to explore. These range from arctic settings where snow and ice slowly build up on the player, the screen, and objects like couches in the environment, to more dynamic scenes that position the player as a Godzilla-esque monster terrorizing a city with a distinct black and white filter applied for maximum nostalgic effect.

While not encouraging dance or offering distinct goals, the playground scenarios invite players to concoct their own objectives, rules, and narratives in order to create a meaningful experience out of the play space. For instance, in the arctic setting, one game could be to see who can remain still the longest before moving and breaking the ice that builds around the player. With a Kinect camera sensitive to player movement, this can prove more difficult than it first appears. That's just one example I came up with, but the point of these playgrounds is to allow for discovery, awe, and wonderment—feelings that seem to have been slowly sapped from mainstream video games these days.

Play should be pointless, but it doesn't have to be.

Finally, although they represent a minority in the overall scheme of options, goal-oriented scenarios provide homage to classic video games and offer more traditional activities like shooting, or the age-old reflecting of virtual balls.

The three scenarios that fall under this type can best be described as a Breakout clone, a Space Invaders clone, and a shooting game that might have been featured in an episode of the obscure Nickelodeon game show Nick Arcade. Seriously, look it up. These more "gamey" games help strengthen the package as a whole, yet oddly contrast with the more creative approaches to play Happy Action Theater's other scenarios offer, either begging the inclusion of other similar "gamey" scenarios, or standing out as too structured compared to the dance and playground.

Play should be disordered.

but doesn't actually refer to it as a game—and he's right. This is more of a tool, and like all tools, it has a specific function. This function is "play," or more accurately, the facilitation of play. Play is about being random, about stepping out of comfort zones, about introducing the imagined to the real, about embracing pointlessness and disorder. Double Fine Happy Action Theater is about all of these things, and so, in a celebratory and inspiring way, it is all about play. Rating: 8.0 out of 10.


Disclosures: This game was obtained via publisher and reviewed on the Xbox 360. Approximately 2 hours of play were devoted to the single-player mode, and the game was completed. There are no multiplayer modes.

Parents: According to the ESRB, this game contains comic mischief and mild fantasy violence.

Deaf & Hard of Hearing Gamers: Sounds and music enhance the experience but are not necessary to enjoy the various scenarios on offer here. Play can be soundless too!