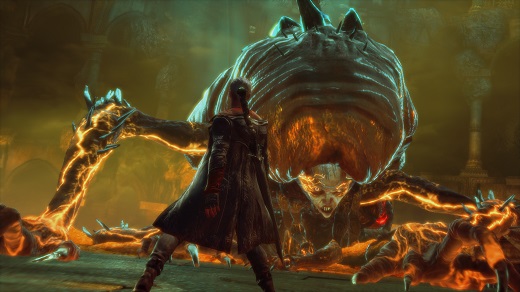 HIGH Achieving an SSS score by using every weapon and chaining it all together.

WTF Fighting a demon fetus still connected to his mother.

In this epoch of the video game "remaster," DmC: Devil May Cry Definitive Edition is yet another vaguely-improved 7th generation game re-released with a handful of extras and features. A cynic would call it a cash-grab. An optimist might recognize it as a welcome improvement to an already decent game.

In Darren Forman's review of the original version, he celebrated DmC for its quick, stylish gameplay brimming with unique ideas. But, he admitted that the storyline left much to be desired. In this new iteration, DmC hasn't changed much. The game still shines in its visual design and mechanics, but the narrative, characters, and platforming sections leave an ashen taste in the mouth.

DmC nailed combat the first time, providing players with three unique melee approaches (angel, nephilim, and devil), a firearm, enemy launching and juggling options, and an array of weapons to take out hordes of enemies. This impressive system remains intact and represents the highlight of DmC's game design.

Combat unfolds at a lightning pace, lubricated by on-the-fly switching between stances, weapons, and actions. The game encourages the player to change between weapons during combat in a fluid manner, but having to hold down shoulder buttons to use alternative weapons can become convoluted during intense bouts. DmC provides a diverse set of attacks, but utilizing the full array of options is sometimes more trouble than it's worth. Also, since the full extent of combat features and weapons aren't unlocked until more than halfway into the game, the early combat and traversal can feel empty or bland.

Apart from the combat, DmC excels in the area of visual graphic design. Although the human characters are bland Barbie doll figures, the enemies and environmental effects provide a diverse and impressive palette.

For example, most of the game takes place in Limbo, a nightmarish reality underneath the surface of our own. The artists freely warp the fabric of our world, placing text in the diegetic space, flipping from one palette to another, and generally playing with player perceptions. A nightclub can suddenly give way to a void, or a persistent black creep can crackle across the world like a sickness. DmC is decidedly not a horror game, but its creepy, grotesque enemies and otherworldly level designs feel so similar to a Silent Hill game that one wonders what developer Ninja Theory might do if they were given the reins to that franchise.

Of course, DmC isn't just a series of fights set against beautiful environments. The player has to have a way to move from one combat encounter to the next, and this is where it stumbles significantly. Jumping feels stilted, especially before the full moveset has been unlocked. Also, sections in the game that force players to swing between floating grappling points feel like glorified quicktime events. Some may appreciate the change of pace during exploration, yet few can deny they pale in comparison to the combat design.

Looking at the narrative, DmC is ostensibly an origin story for the demon hunter Dante, and the writers try hard to tell a complex tale full of mythology, family tragedy, capitalism, and revolution. They fail. The characters are stereotypes, the dialogue is terrible, and the storytelling is simplistic and overbearing. Rather than trusting players to understand the plot through play or environmental clues, the game dumps exposition during long, boring cut-scenes. DmC wants the player to be invested in Dante's quest to rid the world of its demon oppressors, but it never gives a good reason for anybody to give a damn. Overall, the writing comes off like a monumental step backwards from Ninja Theory's earlier titles.

In addition to the original game, those picking up this remaster can expect an array of goodies tacked onto the base package.

First, it includes the DLC titled Vergil's Downfall, a two-hour experience that continues the story where the main game left off, and lets players take control of Dante's brother. He's not just a blue-tinted reskin, though—Vergil has his own weapons, moveset, and playstyle. Multiple skins are also unlocked at the beginning of the game, so players who prefer Dante's classic look to his current emo-goth iteration can switch. Unfortunately, the emo skin is used for all pre-rendered cinematics, resulting in jarring changes to Dante's appearance mid-storytelling. Other major new additions include Hardcore and Gods Must Die difficulty modes, an enemy target lock, a playable Vergil in Bloody Palace mode, and a 20% faster Turbo Mode, which may be the biggest draw for fans thinking about a repurchase.

While it's a solid action title, DmC doesn't measure up to the queen of the genre, Bayonetta. Ninja Theory's combat and graphic design illustrate their talent, but the weaker environmental exploration and narrative make the game an uneven package. Fans of the action genre may find a lot to love, but for most, this is a title better left in Limbo. Rating: 7.5 out of 10


Disclosures: This game was obtained via publisher and reviewed on the PS4. Approximately 10 hours of play was devoted to single-player modes (completed 1 time)