As Addicting as Halflings' Leaf–or Pie 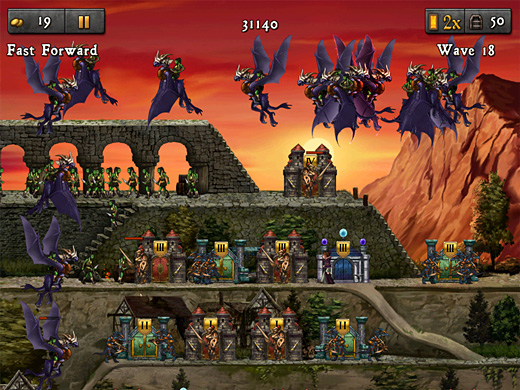 HIGH Addicting tower defense gameplay to while away the hours.

WTF Does every fantasy character have to sound like Sean Connery?

In Joss Whedon's mad scientist musical Dr. Horrible, the titular doctor's love interest Penny claims that sometimes people have deeper layers beneath what otherwise might be mistaken for a shallow personality. Doc Horrible responds, "And sometimes there's a third, even deeper level, and that one is the same as the top, surface one. Like with pie."

Although an odd reference to make regarding an unrelated iOS tower defense game, Defender Chronicles II: Heroes of Athelia is like that. On the surface, the game looks like a banal fantasy game, but underneath this tasteless exterior is a juicy, even addictive game that employs some of the best elements of its game genre. Sadly, though, underneath this layer is another: the realization that while engrossing, Defender Chronicles really doesn't offer anything fresh or innovative. The game is a pie like that.

For those interested, there is a lot of backstory and lore here, but none of it is necessary to enjoy the core game mechanics. Along the same lines, although the voice-acted mission introductions and wacky, if not out of place, comic book pages that conclude missions are welcome, they ultimately convey a boring high fantasy narrative that most players will end up skipping. This is the kind of stuff that represents the bottom crust to Defender Chronicles's pie.

In typical tower defense fashion, each mission takes place on a different 2D map consisting of various levels connected through caves and staircases. Enemies spawn from designated areas and march towards the player's "tower," usually not visually represented so much as implied by its position on the opposite side of the map. If enough enemies cross this threshold, the player fails the mission. To quell this horde of conquerors, the player must construct buildings on select sites to deploy troops, including infantrymen, bowmen, and mages. Each mission starts out slow, but eventually builds to crescendo points that force the player to strategically place certain troops at choke points. For instance, some enemies easily walk through infantrymen but crumble when assaulted by Lizardmen archers or a mage's spell. Understanding these dynamics on the fly is what makes the core of Defender Chronicles II so pleasurable—or frustrating, depending on the player's success. 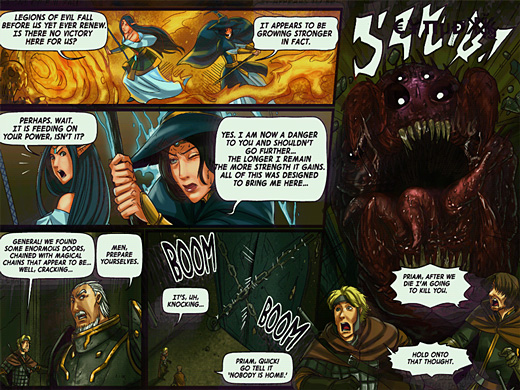 Hero units add an additional element to gameplay. Besides an initial choice between the warrior General or the mage Melwen—with two additional hero units available later in the game—player interaction with hero units is minimal. There is no direct usage during battle, so the hero acts more like a continual area of affect spell that can boost unit effectiveness or act as a last stand against enemies that break through the player's defenses. Although certainly not useless, beyond leveling and upgrading the gear of the hero to better boost the stats of deployed troops, the hero avatar lacks complexity during the core gameplay experience.

As enemies spawn at a consistent rate, the player must work briskly to build new structures and update existing ones using currency earned for killing enemies. Figuring out what combination and array of troops work best for each mission while under continually pressure creates a tense, quickly paced but rewarding experience. Unfortunately, with each new map come new routes and enemy concoctions, which cause the player to have to adapt on the fly to changing conditions. This helps create a sense of uncertainty and pleasure but can also lead to frustrating failure that amounts to trial and error gameplay, especially when encountering new enemy units whose weaknesses are not easily discovered.

Outside of the main game, Defender Chronicles II offers four types of custom games, available on any map that has been completed in the campaign. These include Freestyle, Classic, Extended, and Classic Extended. Each offers players another way to bulk up their army when stuck on the central story or after completion of the game's quest mode.

Between missions, players navigate the world map where they have access to the latest missions, stores to upgrade heroes and units, and the ability to purchase in-game tokens to improve their army's skills faster. Players can upgrade their heroes at the Stronghold. The Great Library sells general troop upgrades. The Elf Hut provides weapons for purchase. And at any time, players can purchase more in-game tokens with real-world money through microtransactions, purchasable through any store but sold in bulk through the Imperial Store. The lure of superiority might tempt some players to invest real cash early on in the game, but each mission offers enough reward, even on the initial difficulty levels, that a player can gradually upgrade their resources without resorting to microtransactions.

As an iOS title that offers literally dozens and dozens of hours of engrossing entertainment, it is hard not to recommend Defender Chronicles II: Heroes of Athelia to avid fans of the tower defense genre. Yet this is the same recommendation one would offer for a store-bought apple pie. Two bland sugary layers do not quite negate the juicy, spicy filling, but they still reveal the dessert's factory-produced origin. In other words, Doctor Horrible was right about Captain Hammer. Hammer's third layer was as superficial as his surface. But what does it mean that Penny still ended up sleeping with him? It means regardless of the plain truth in front of us, sometimes we still eat the pie. Rating: 7.0 out of 10.


Disclosures: This game was obtained via publisher and reviewed on the iPhone 4. Approximately five hours of play were devoted to the single-player mode, and the game was not completed. There are no multiplayer modes.

Deaf & Hard of Hearing: The epic score and silly troop voices enhance the experience but are not necessary to enjoy the product.