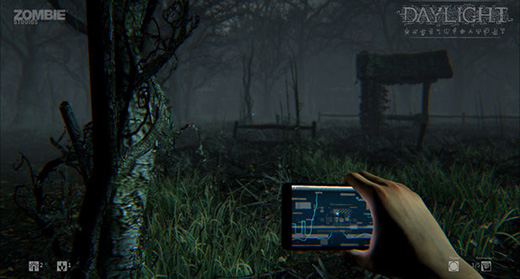 HIGH Effective sound design that leaves players shaking… before sprinting for their lives.

WTF I had to force myself to play this game because I'm a coward.

is a procedurally-generated, first-person horror game where players assume the role of Sarah, a forlorn and amnesiac young woman. Her task? To investigate the shadowy, abandoned rooms of a dilapidated insane asylum.

A disembodied voice leads Sarah around via her cell phone, which also doubles as an onscreen map. She'll creep through a hospital, jail cells, sewer tunnels, seaside docks, and a gloomy forest. Along the way, empty cribs, disheveled desks, and rusted pipes occupy the dozens of rooms the player scavenges. Despite Daylight's randomly-generated environments, the game still follows the hallmarks of environmental storytelling, complete with a spooky mystery to unravel, scraps of paper to collect and read, and the looming danger of wailing poltergeists to run from.

Visually, Daylight looks decent running on the Unreal 4 engine, yet the game's limited budget is evident in its murky, sparse environments and under-developed art assets. As a result, nothing in the game ends up standing out graphically. Mostly things are just dark. Dark and empty.

Instead, all the tension and terror in Daylight comes from the lighting and sound design. Lights flicker and dim. Low rumbles and hollow, cavernous winds surround the player, creating a sense of infinite emptiness and despair. When ghosts are near, the player's cell phone warps with static and crackling, and Sarah calls out in the hopes that something human will call back. At its most heart-pounding, the score erupts with high-pitched, staccato notes and menacing drums. Even when danger is not present, these eerie sounds continue to disturb.

Unfortunately, Daylight is unnerving without being engaging, which means some people will quit out of an ironic mixture of fear and boredom.

To its credit, Daylight initially nails a sense of powerlessness, although once players learn the game's tricks, they'll easily know when they can run past threats unscathed. Indeed, as the game progresses, the hallways become increasingly populated with ghouls that are more like pesky flies than deadly spirits. Although the spooks can still induce a scare if they sneak up on the player, too much of Daylight boils down to looking for the right object needed to progress while avoiding the spiritual annoyances.

The supposed level generation is also far more limited than expected. Instead of feeling fresh each time the game loads, the rooms are just switched from one location to another while still keeping the overall architecture of each level intact. The generic and easily-deciphered mystery driving the story isn't enthralling enough to overcome the ennui produced by Daylight's vacuous corridors, either. Adding insult to injury, the plot ends with a sudden jolt, rather than a satisfying feeling of revelation or epiphany.

does manage to produce a few frightening scenarios thanks to the impressive audio, but it's a shame the story, gameplay, and environments aren't as well developed as the sound. The bones of something more chilling (and satisfying) are here, but there just isn't enough meat on them. Rating: 5 out of 10


Disclosures: This game was obtained via publisher and reviewed on the PS4. Approximately 3 hours of play was devoted to single-player modes (completed 1 time). The game has no multiplayer modes.

Parents: According to the ESRB, this game contains: violence and strong language. However, most of the violence is implied or described through notes the player discovers and not actually depicted on screen. This is equally true of the strong language.

Deaf & Hard of Hearing: This game is perfectly playable without sound, but it will most likely not be very scary.