Your Mission, if You Choose to Accept It… 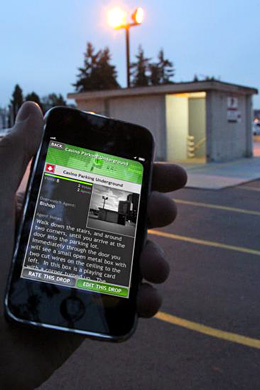 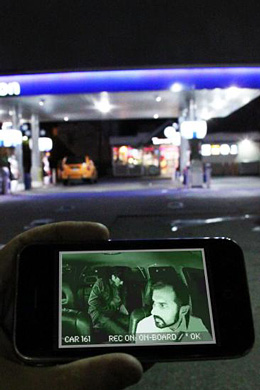 HIGH Immersive, interactive drama with the real world as its map.

WTF The ghost of FMV games comes back to haunt us.

People walk the sidewalks like they're trying to forget—maybe themselves, maybe a lost loved one, maybe the state of things.

The air feels electric. Twitchy. A nervous rat scurries around every other corner. The walls all have eyes and ears.

This is the world we live in now. This is the world ruled by our so-called Department of Privacy; the big government outfit charged with protecting us all…. Only they aren't in the business of protection, and it's my job to bring them down.

It's an undercover gig. No special uniform. No shiny badge.

I walk the dirty streets and alleys like any other schmuck. I use my phone to guide me, to communicate with the boys down at central intelligence, and to find, collect and transfer vital data—the evidence I'm gathering to unravel this conspiracy. This great cyberpunk mystery. Whatever.

The guy talking to me over the intercom never shuts up. He's the kind of guy who's nervously relaxed, anxiously laidback, and I don't trust him even if he is my only link to the agency. Still, his voice helps me believe the lie, as do the others. The corrupt politician. The femme fatale. They're all here… All just characters in this little charade. I feel like a character from Orwell's 1984 or some obscure William Gibson novel. I have to remind myself this isn't a game, though.

This is serious. I have a job to do.

This spy racket isn't so hard. I just walk around the neighborhood, down town, the burbs. Anywhere really. The GPS in my iPhone helps me know where I am, helps me explore my surroundings. Only thing is, it helps my friends and enemies know where I am too. Sometimes there isn't much difference between the two.

The intelligence boys always have a few missions for me to choose from at any given time, and if I don't much like the direction they're sending me, I can ask for new mission locations. I hack security cameras, ATMs, and electrical boxes. I intercept cell phone calls, texts, and video chats. It's all stored on my phone, ready to be shared with intelligence, or reporters, or other agents. Like Kurtz says in Apocalypse Now, I'm just an errand boy in all us this, sent by a grocery clerk to collect a bill.

Sometimes they ask me to create "dead drops," which are new locations of interest where I can store data for other agents to find. The office usually wants me to pick bus stops or dumpsters or mailboxes. You know, familiar places, but any old haunt works. I just snap a picture, name the dead drop zone, and create a password.

I drop the digital evidence at the location like so many flower petals at a funeral, and we've reason to mourn. Our collective privacy is dead now.

As much as I love this job, I have to admit it's time-consuming. Not that I'm not dedicated, but sometimes I only have a few minutes of free time here and there. A mission like this requires time and patience.

I actually have to get off my ass and walk around. Find leads. Investigate.

Sure, my old ticker can use the exercise, but damn it if I wouldn't rather be behind my desk, feet propped up, whiskey in hand. Used to be, I could get by like that. With this CodeRunner business, though, I can't just pick it up and put it down when I feel like it.

This is an experience, a bona fide interactive drama.

It feels like playing a version of those old Sega CD full motion video games from when I was a kid, only this time I have to walk around the city to progress… But there I go again, comparing this case to a game when I know it's not.

People are dying. Conspiracies are afoot, and I'm the only person willing to do something about it.

You can call it stupidity. Or courage. Or the last gasp from an old private investigator.


Disclosures: This game was obtained via publisher and reviewed on the iPhone 4. Approximately 3 hours of play were devoted to the single-player mode, and the game was not completed. There are no traditional multiplayer modes, although players can find "dead drops" left by other players.

Parents: The ESRB does not review iOS games. This game is rated 12+ on the App Store for mild sexual content or nudity, mild suggestive themes, mild profanity, and mild drug use or references.

Deaf & Hard of Hearing Gamers: CodeRunner relies on audio clips to give instructions to the players and advance the narrative. Without audio, this game cannot be played effectively or enjoyed to its fullest.