This Time, She's not in Another Castle 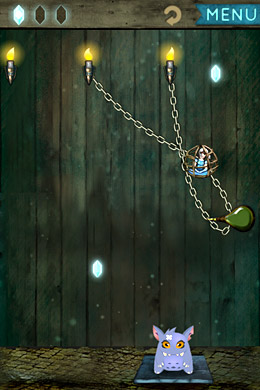 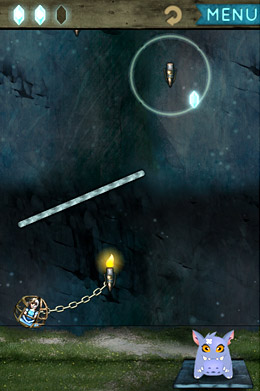 LOW It's a reskinned Cut the Rope.

WTF What is that thing catching the princess?

Along with Angry Birds, Cut the Rope is one of the most successful and intuitive games on mobile platforms. The title of the game literally describes the central player input: cutting a rope with the swipe of a finger. It works, so if a developer takes this premise and strips away the candy, stars, ropes and little green monster and then replaces these with a princess, diamonds, chains and a little blue monster, how can it be anything but successful and intuitive? The truth is, Catch the Princess, a game developed by Robots and Pencils, is a beautiful title that offers a fluid experience and implements the best of touch-based controls. The other truth is that Catch the Princess is a blatant copy of Cut the Rope… and I'm okay with this.

An anime-inspired princess clings to the bars within an orbed cage, dangling from the dank ceiling by a twisted chain. By swiping the screen, the player can cut the chain and help lead the princess through a gauntlet of other chains and into the arms of some kind of goblin hero that waits for her near the bottom of the screen.

Along with connecting the princess to her unlikely hero, the player can help the princess collect up to three diamonds per stage; in-game currency that results in higher points and the ability to unlock later levels. Over the course of 60 stages, the player will encounter a plethora of physics-based puzzles and the standard collection of obstacles and aids. These involve billows capable of blowing the princess in desired directions by a tap of the screen, spiky girders and flame-throwing statues to be avoided, and inclined planes to be successfully navigated. If a player is looking for anything more complicated than this, he or she is looking in the wrong place.

Despite its lack of originality, Catch the Princess has a slick presentation. The art is clean and appealing, if a little minimalist, and the interface allows for simple navigation of menus and stages. The sound design is uninspired but does offer an appropriate amount of gothic-esque, ambient sounds and synthetic organs. However, the princess's scream when she falls into oblivion, gets impaled by a spiked column, or becomes engulfed in flames starts out as irksome and eventually becomes unbearable (especially after repeated deaths). With a soundtrack that does little to enhance the game, an easy fix for this is to mute the sound and listen to a personal playlist. I recommend something baroquian.

The fact that Catch the Princess is a part-for-part copy of Cut the Rope needs to be addressed—from a creative standpoint, Catch the Princess does nothing new. Worse yet, it steals all its best ideas. Perhaps it is cynical to think, but Catch the Princess feels like a cash-grab, and if this game was really developed for capitalist gains, that's fine. If the money earned from this arguably solid effort allows Robots and Pencils to create a legitimately fresh experience in their next game, there is no harm in a little imitation. We just need to be honest about it. If people like Cut the Rope, they will like Catch the Princess. It may be a shameless imitation of a highly successful mobile game that offers nothing new in terms of design, gameplay, or aesthetics, but both provide slick, intuitive experiences that feel at home on mobile, touch-based platforms.


Disclosures: This game was obtained via publisher and reviewed on the iPad. Approximately 3 hours of play were devoted to the single-player mode, and the game was completed. There are no multiplayer modes.

Parents: The ESRB does not rate iOS games. The App Store rates this game ages 4+. This reviewer found there to be only the mildest of simulated violence, below that of most cartoons.

Deaf & Hard of Hearing: The music and sound effects are not necessary to enjoy this game. In fact, perhaps this game is better without them.