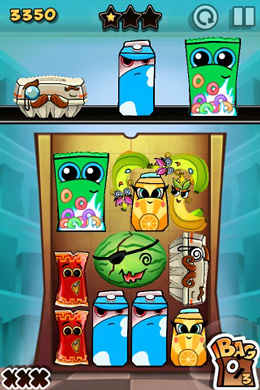 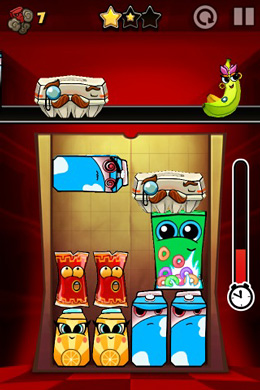 LOW Difficulty is a little uneven.

No one ever says they want to be a bagger when they grow up, but after the recession, you have to take any job you can get. In a mania, you check out the corner cake shop, but Jill already works there. You then dash to the local diner only to discover the position filled by a woman named Flo. So where do you turn? After the recession, you can't be too choosy. You become a grocery bagger. You take your dreams and you bag them. You take your dignity and you Bag It!

I can only imagine a thoroughly rotted out Karl Marx spinning in his grave over the idea of a game that abstracts labor into a series of inputs on a touch screen that gamifies a menial task one usually gets minimum wage to endure. Indeed, there is something unsettling about bagging groceries as the main objective in a video game, as if a person's fallen into a mini-game in the Sega classic Shenmue and cannot find their way out again. Just forklifts and bagging eggs. Forever. The player, literally positioned as a wage slave. I mean, since when is work fun? Yet the most unsettling part of Bag It! is I actually enjoyed myself.

Despite my Socialist, elitist meanderings, Bag It! from Hidden Variable Studios offers an engaging and addictive set of challenges snugly placed within the conceit of bagging groceries.

Right off, players "choose an aisle" to pick a mode of play. This presents a kind of false choice akin to modern grocery shopping. Thousands of items on the shelves, but most of them derive from just a handful of international food conglomerates. Bag It! offers a total of six aisles, or game modes, plus an additional mode which teases the player with a "coming soon" banner. Unlike the choice between cereals or spaghetti sauces, these modes offer a unique twist to the basic stacking, shuffling, and cramming gameplay of the original mode, Got Spilt.

In this first mode, the player grabs food items from a conveyor belt at the top of the screen and tries to fill grocery bags as full as possible without crushing any merchandise. As any bag clerk knows, a carton of eggs makes a terrible foundation for a sack of food goods. Keep these kinds of instincts in mind and players will eventually be bagging with the best of them.

The touch controls are simple, intuitive, and easy to grasp. Like Tetris blocks, the items can be rotated 90 degrees if space allows. This opens up a number of options for the player in order to rearrange the claustrophobic geometry of the grocery bag to achieve success. Juggling a steady stream of items including cereal, orange juice, milk, bananas, baguettes, watermelons, and eggs, the player learns which items belong on the bottom of the bag and which will snap like twigs if given that responsibility. In this mode, the player is allowed three crushed items before she fails a level, and while early stages make this allotment of errors seem generous, later stages almost require the leeway.

Like most mobile games these days, stars are awarded for the best performances. Beat the level quickly and cleanly and get three out of three stars. Badges are given out for achieving specific stage goals, such as ending the level with all food items upright instead of upside-down or sideways. As more stars and badges accrue, new modes and stages unlock. I can imagine a progress report for each employee hanging in the back office—under the player's name, the store manager tracks progression by a series of stars. These stars come to define the player/worker, they become the carrot dangling from the string—a carrot players will eventually be asked to bag too.

Other modes include Udder Mayham, which inverts Got Spilt's expectations of gentleness and asks you to destroy as many groceries as possible. Fresh Squeeze is a puzzle-based mode where players use spatial reasoning skills to try to fit all items into one bag without breaking any. This mode is especially engaging for those who enjoy brainteasers. To round out the aisles, Ultimate Bagger and Endless Rampage are endless mode variations on Got Spilt and Udder Mayham, respectively, which keep the groceries flowing but also stop the game after one mistake. Power Surge adds an additional pressure to the endless game formula by zapping groceries on the conveyor belt that the player is slow to grab. Think of this mode as a disgruntled manager poking you with a cow-prodder if you don't keep the pace—remember, there is no union to represent the worker's rights.

With soothing elevator music to lull the player/worker into a sense of passivity, they'll soon be bagging mindlessly, indifferently, but always bagging toward more stars, more badges, more levels, and more opportunities to, well, keep bagging. So why would I recommend Bag it! to anybody? After the recession, you have to take any job you can get. And if that job is going to be menial, if it's going to be rote and demeaning, it might as well be as engaging, as playful, and as inventive as Bag it! Rating: 8.0 out of 10.


Disclosures: This game was obtained via publisher and reviewed on the iPad and iPhone 4. Approximately 5 hours of play were devoted to the single-player mode, and the game was not completed. There are no multiplayer modes.

Parents: The ESRB has no rating for this game. This game is appropriate for all ages, but does feature inanimate food items being crushed by other food items.

Deaf & Hard of Hearing Gamers: Sound is not necessary to enjoy this game. It's totally accessible!