Reaches For Heaven, Ends Up in Limbo 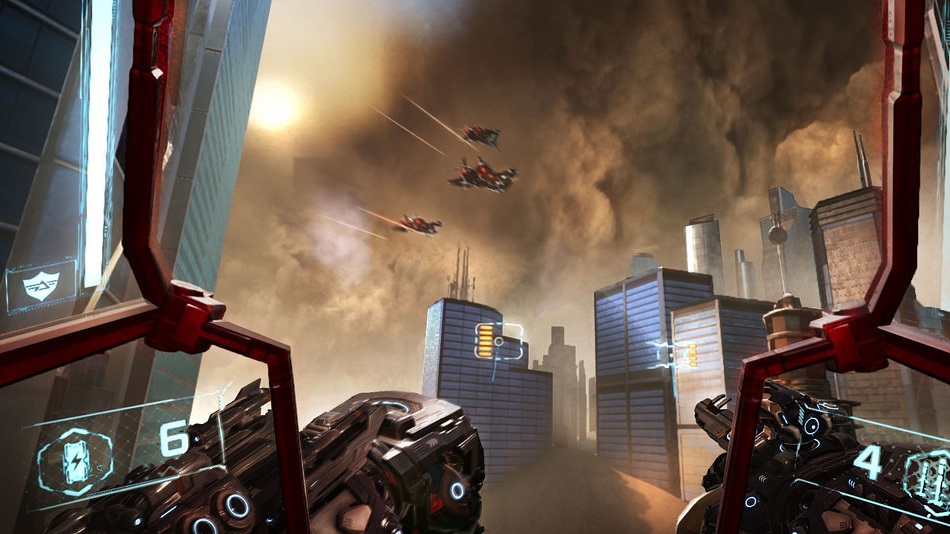 HIGH The final level and the impressive boss fight.

WTF A subplot about the melding of machine and human minds that goes nowhere.

Archangel is a story-based, on-rails shooter for the PlayStation VR that puts players in the pilot seat of a four-story tall mech reaping vengeance against a paramilitary group that has destroyed their family. The game expresses a strong sense of scale and core mechanics, and presents a surprisingly human narrative at times. Sadly, it ultimately falters due to lackluster visuals, slow pacing, and a short, straightforward campaign.

In a future where global climate change has sapped the Earth’s water supply, a paramilitary group called HUMNX (pronounced humanix) has risen to return order to a world spinning out of control. Archangel picks up as players choose to play as either Gabe or Gabby Walker and accompany their son to field test a secret robot weapon called Archangel that promises to turn the tide of a war between HUMNX and the resistance. Unfortunately, things go awry during the testing and players set out, inside the Archangel mech, on a quest for revenge against HUMNX.

In many ways the story is generic, featuring an evil paramilitary organization and a plucky group of rebels fighting for the common people. However, the central plot is more interesting. This choice between playing Gabe or Gabby changes Archangel‘s perspective to either a grieving husband/father or a grieving wife/mother. While the ability to choose either is a small detail, the fact that the protagonist is a person of color is a breath of fresh air in an all-too-white industry. In fact, the ability to be a black mother fighting in a giant mech is something no other game has offered, as far I know. Decisions like this that add texture to an otherwise rote war narrative focusing on the last hope a giant robots offers.

Besides some narrative choices, Archangel’s strongest quality is its core gameplay. In the PSVR, players are free to look around the mech’s cockpit in 360 degrees. At almost any given time, the mech is the largest thing on the battlefield, providing an impressive sense of scale while also making the player feel powerful. Using two required PS Move controllers, players control the right and left arms of the mech. Players can punch, but will primarily use the guns on the mech’s right arm and the missiles on the mech’s left to take out waves of enemies. What makes the mechanics engaging is that each arm is also equipped with an energy shield.

While working their way through on-rails levels, players have to constantly balance the use of their weapons and shields on both arms. For instance, while firing with the right arm, players should have their left arm shield up. As the shield depletes, players have to switch to their right arm’s shield and their left arm missiles. It’s a dynamic that will keep players switching up what they’re doing with each arm while trying to conserve ammo and shield energy, both of which replenish after brief cooldown periods. 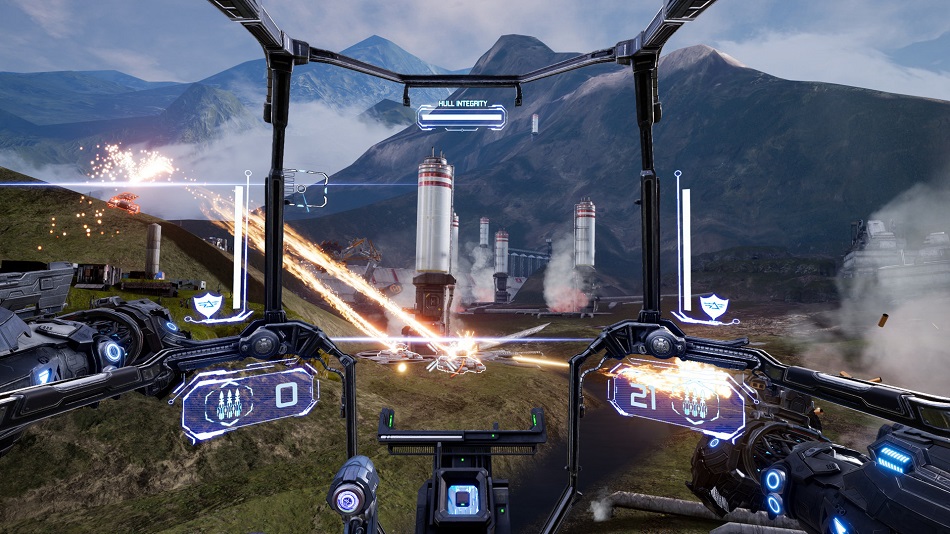 Despite being Archangel‘s best element, there remain a few drawbacks to the attack mechanics. First, the weapons don’t feature appropriately loud sound effects — instead, they’re oddly muted. One would think a machine gun or missile launcher attached to a giant mech should be way louder. Hopefully this is something the developers tweak in future updates, along with an option to control the volume of in-game voices of squad mates, sound effects, and music. Second, while it only happened once, I did encounter a major tracking problem during my playtime that meant I couldn’t aim my weapons and had to exit the game completely to reset it.

Other than these minor quibbles, the moment-to-moment action in the mech’s cockpit works well. However, Archangel stumbles hard when it comes to offering engaging levels, visual fidelity of environments, and overall campaign length.

The developers at Skydance use a lot of resources making sure the mech cockpit and chassis look great, which was a smart choice considering these are the closest assets to the player’s point of view. However, everything else in the game suffers from low polygon counts and simplistic texture work. It’s a good thing the action takes place in an apocalyptic desert since it explains the sparse, barren environments. Particle effects add some necessary pizazz to the visual presentation, but the graphics still vary wildly from one level to the next. The scenes get somewhat better as the game moves from ruined Chicago to the mountains of Colorado, but the improvement is never profound.

Another consequence of the technical demands of VR is that there’s just a slow drip of enemy activity throughout each on-rails level. I won’t say most levels are boring, but they rarely throw anything exciting at the player until for the final level, which stands out as the best. In fact, if the devs would have included more levels like the last (a multiple-stage boss fight with a colossal enemy weapon) the campaign’s brevity would be overshadowed by its wow factor. Instead, the jaw-dropping moments come to little, too late in the short four-to-five hour campaign.

In between missions players can upgrade core systems, including weapons and shields. They can also engage in optional conversations with squad mates who pilot attack ships that assist on the battlefield. These conversation sequences are entirely optional, but consist of probably 30 or 40 percent of the story content. Skipping them means the game can be completed in just two-to-three hours. Again, although they’re something many players might skip, these sections bring humanity and help flesh out the relationships and emotional stakes.

Archangel is a highly ambitious game despite the on-rails shooter genre to which it belongs. The mechanics of balancing weapons fire with energy shielding make for an engaging fighting system and its narrative tries to surpass expectation with creative choices, but it ultimately lacks the environmental detail and moments of awe that would have made its adventure a memorable one. Rating: 7.5 out of 10

Disclosures: This game is developed and published by Skydance Interactive. It is currently available on PSVR. This copy of the game was obtained via publisher and reviewed on the PSVR using a PS4 Pro. Approximately 4.5 hours of play were devoted to the single-player mode, and the game was completed. The game has no multiplayer modes.

Parents: According to the ESRB, this game is rated T for violence, blood, and foul language. Players blast enemy soldiers and vehicles with missiles and machine guns, although there’s almost no gore. Holograms are shot and leave pixelated blood on glass. Characters use mild curse words. The game is pretty sanitary overall, though.

Deaf & Hard of Hearing Gamers: The dialogue can be read via subtitles, and there are no significant auditory cues since it’s an on-rails shooter.

Remappable Controls: No, this game’s controls are not remappable, and it requires two PlayStation Move controllers.