The Rest Of The Content Must Still Be Lost To History 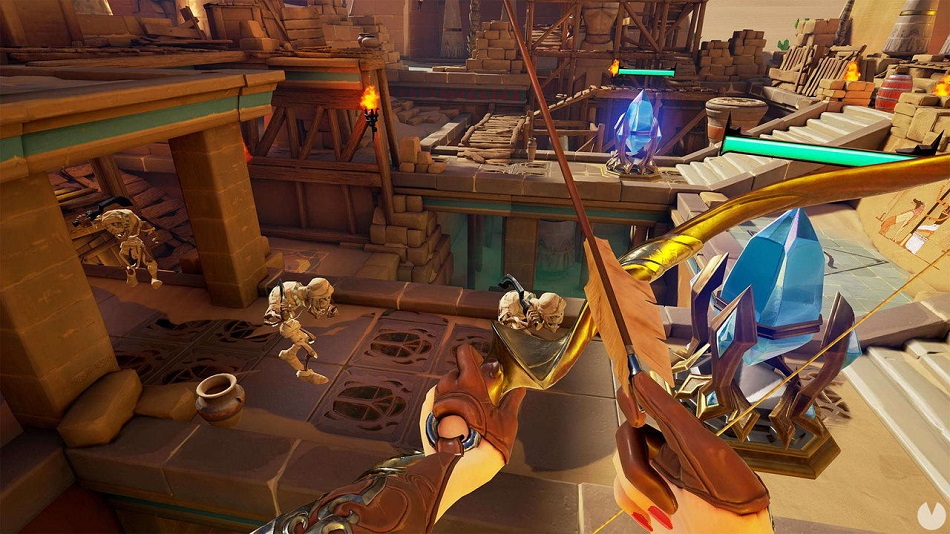 HIGH The satisfaction of mowing down enemies as the shooter.

WTF Controlling a virtual puppet with my virtual arms controlled by my real arms.

Ancient Amuletor is a first-person fantasy-based tower defense game for the PlayStation VR from Chinese developer Ti Games. With the PSVR still in its first year of release, Amuletor enters a relatively sparse field of competition and stands out as one of the only PSVR entries in the tower defense genre. However, Ti Games has exploited this early position by releasing an anemic amount of content and only a promise of more sometime in the future.

As a stripped-down tower defense title, Ancient Amuletor lacks any semblance of narrative and instead relies on the iconography of skeletons, archers, and sorcerers to communicate its generic fantasy settings. Within this thematic bubble, players are charged with protecting crystals placed around virtual arenas such as a vaguely Egyptian palace or Roman ruins. Players protect these crystals by destroying waves of enemies that appear out of ominous portals and follow designated paths toward their targets.The game requires a PlayStation Move controller in each hand to point and fire at oncoming enemies. The one-to-one control for each character works well for the most part, and I experienced very little drift of my virtual arms as I played.

Ancient Amuletor offers players four character classes to choose from, including a shooter, an archer, and a mage. A puppeteer is also unlockable. Each character has one standard weapon and one weapon that can be unlocked. The shooter character will most likely be the most popular since she wields dual pistols as her starting weapons and has a temporary infinite ammo ability. Shooting the guns feels nice in virtual reality, and a quick flip of the wrist reloads an empty chamber. The pistols aren’t especially accurate, but their buckshot spread means players don’t have to be marksmen to appreciate the gunplay.

In contrast, the archer asks players to use realistic gestures to fire a bow and arrow at enemies, and can lock onto multiple targets and fire a multi-arrow at them. The archer is slower than the shooter, but the bow play is exceptional in VR — players shouldn’t try to work too fast, though. After firing each arrow, it takes half a second for a new arrow to materialize in the player’s right hand, so rushing means limp or misfired arrows.

Even more technical than the shooter and the archer, the mage conjures fireball spells with their left hand and tosses the blazing orb using a wand in their right. Although it’s a powerful attack, aiming the fireball can be difficult and takes practice to properly wield. It’s also a far slower attack than the pistols. 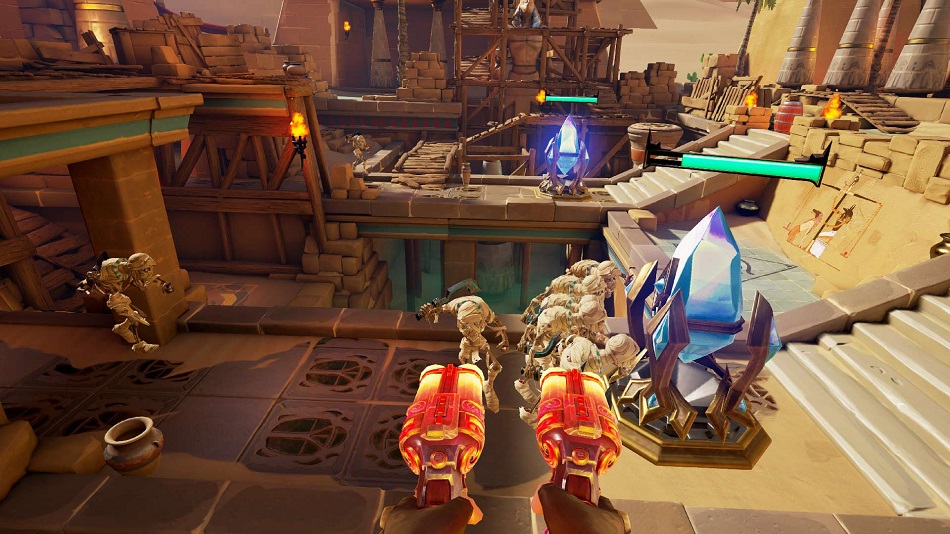 Perhaps the strangest of the four, the puppeteer operates by tossing a robot onto the battlefield and controlling it from a distance. Once tossed, the player moves the robot’s arms by using their own virtual arms to swing its weapons around and smash groups of enemies. It’s bizarre to be virtually inhabiting a character who is virtually inhabiting another, and suggests yet another layer of creative possibility for VR games down the line. Operating the robot puppet is delightful, but it’s also difficult to position correctly. Rather than being a particularly useful singleplayer character, the Puppeteer appears to have been included for multiplayer as variety for defenders.

Ancient Amuletor offers the ability to switch between characters on the fly using a selection wheel. While a nice option, the selection process takes just a few seconds too long since players have to confirm character changes via a button press. During hectic situations, it would be nice if the developer could make this happen just a little bit faster.

Like many VR titles, Amuletor uses teleportation to move people from one vantage point to another. Essentially, players are immobile turrets and can only warp around and attack from fixed locations. The one problem here is that players must hit the move buttons on both controllers simultaneously to activate special attacks. This can lead to accidentally teleporting when they try to activate their special abilities. It’s minor, but irksome.

At launch, Ancient Amuletor has only two worlds to experience, Egypt and Rome, for a total of just four levels and two boss encounters. The bosses showcase a sense of scale, with one encounter involving a towering statue that comes to life. The game has placeholder icons for two additional levels based on ancient Japan and what looks to be a Viking setting, but there’s no indication when these additions will be provided, or if they’ll be free.

The game’s multiplayer mode was not well populated since I was playing pre-launch for this review, but I was able to find another player. For those looking for a challenge, the harder difficulty modes lend themselves to having teammates who can work together to handle the increased waves of enemies. While players can get in each other’s way by being in the same location, the multiplayer extends the life of this otherwise short game.

Ultimately, the small amount of content at launch is Ancient Amuletor’s greatest weakness. With no story whatsoever, only four characters, and four levels, it feels more like an early access game than a full release, although its low price point does somewhat reflect this. The core mechanics are solid the characters all feature distinct combat styles, so it does offer an engaging, immersive tower defense experience, especially on higher difficulties and with more players added. However, with the release schedule and pricing for DLC still vague, I can only recommend Ancient Amuletor to PSVR owners starving for something to play. Rating: 7 out of 10

Disclosures: This game is developed by Ti Games and published by The Time of Virtual Reality. It is currently available on PSVR. This copy of the game was obtained via publisher and reviewed on the PSVR using a PS4 Pro. Approximately 3 hours of play were devoted to the single-player mode, and the game was completed. 1 hour of play was spent in multiplayer modes.

Parents: The ESRB has rated this game T for violence. This game is appropriate for teenagers and older individuals. Players use guns, a bow and arrow, magic, and melee combat to attack enemy soldiers, skeletons and sorcerers. There is no blood, but the violence in virtual reality may be inappropriate for younger players.

Deaf & Hard of Hearing Gamers: This game can be enjoyed without sound. There is no dialogue and therefore no subtitles. It’s fully accessible.

Remappable Controls: No, this game’s controls are not remappable. It requires the PlayStation Move controllers.