Alex Rushdy and Dave Proctor from 13AM Games stand around the kiosk for the 9-player party game Runbow for the Wii U and shout at people to join the next round. This is the first time 13AM Games has exhibited at IndieCade. Alex is the game's Creative Director and Designer and Dave Proctor is the Producer. Both are enthusiastic and eager to share their pick-up-and-play 2D running game with the gathering crowd. It's a game that's easy to fall in love with.

Using every controller available for the Wii U, including Wii Pro controllers tethered to Wii-motes, both operating different players, 13AM Games has managed to create a multiplayer racing game that allows for up to 9 players. In the main mode of the game called Run, players race from one side of the screen to the other, punching each other and double-jumping in an effort to reach a trophy at the end of each stage first. As colors in the background change, platforms in the foreground appear and disappear. Meanwhile, several power-ups appear in each level that can instantly change the momentum and outcome of the race. At the end of 15 races whoever has the most trophies wins the round. It's a simple concept, but one that makes for an exhilarating time when standing or sitting next to 8 other competitive or silly people.

After one such fiercely competitive but still friendly round, I pulled Alex and Dave aside for a quick chat about 13AM Games and their flagship title Runbow.

GameCritics: Tell me what you do at 13AM Games and what Runbow is all about.

Alex: We're a little excited to be at IndieCade.

This is your first IndieCade?

Alex: This is our first IndieCade! Nintendo brought us here, which we're really happy about.

Dave: A crab-bucket-ish race against your friends!

Alex: It's very fast-paced. Very simple. Easy to pick up. Just two buttons. That's it. We really wanted to keep it simple in that regard. But there's a lot we're doing with that mechanic and the different modes.

This demo here, we've got three modes. We've got Run, which is a race against your friends. That's the main mode for multiplayer. We've got Arena, which is sort of a combative-

How many people are on the dev team?

Dave: Nine. [Note: This is the reason for the 9-players, so everybody on the dev team could play.] 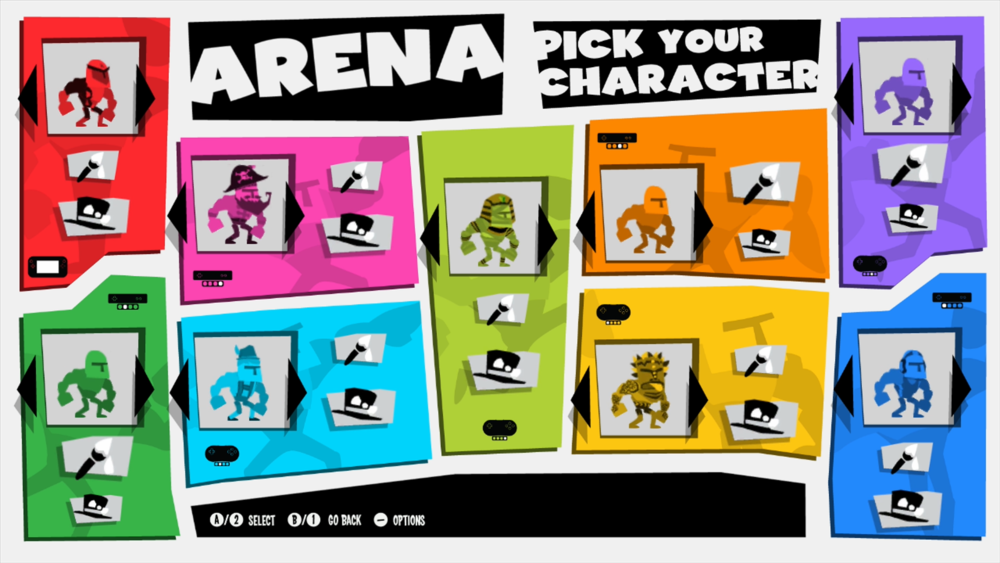 How long have you been working on this?

Dave: Since January. We actually developed Runbow for the Toronto Global Game Jam at the end of January. We've been working on it full time officially since August.

Alex: So the total dev time is probably more like three months.

So did 13AM Games start with Runbow?

Dave: 13AM Games are all graduates of a game design program from George Brown College in Toronto. We built two games and submitted to the game jam with our team. The idea to turn Runbow into a console game is because this is the kind of game we all grew up playing and we wanted to make it our first foray into the industry.

How did you fund the game?

Dave: It's all a passion project right now.

You said Nintendo brought you here. What is that process like?

Alex: Since last September, I've been talking to Nintendo because I wanted to do my own game project on the Wii U. So that's how we first started talking with them. Then Runbow got a lot of positive attention. We're doing it in Unity and we thought, "Hey, why don't we send this to Nintendo and see what they think?" They loved it. They said, "We would love to bring you guys to IndieCade." It's as simple as that really. They are really easy to get a hold of and fast to get back to us.

Do you have any other platforms planned for the horizon?

Alex: Right now we're on Wii U. We want as many people as possible to play the game, so we're not closing any doors yet. But we have some Wii U specific features that we're really excited about.

Dave: There is no other console that can push this 9-player feature that we really like, so that's a huge selling point to us.

So what are the big challenges of being a new indie studio out of school?

Alex: You have to have a part time job and be willing to put in those hours knowing you're not going to get paid until this game ships.

Dave: You have to have the most dedicated team imaginable, and we do.

So you both have part time jobs?

Dave: Yeah. Some of us do freelance work, etc.

Dave: I work at a bar! That is paying the bills. That's how we get to make this game.

That's a common story. It seems you're either contracting and making software with banks or insurance companies or you're working as a barista or a bartender.

Dave: We've sunk a little bit of money into the project. Also, up in Ontario, we've had the opportunity to apply for grant funding. So that helps.

Do you have anything else to say about Runbow?

Alex: One of the things we want to do is, we love local multiplayer, but Runbow isn't just local multiplayer. It's going to be online. We're trying to create a game that you can play all the time instead of just when your friends are over.