Down Came the Rain… 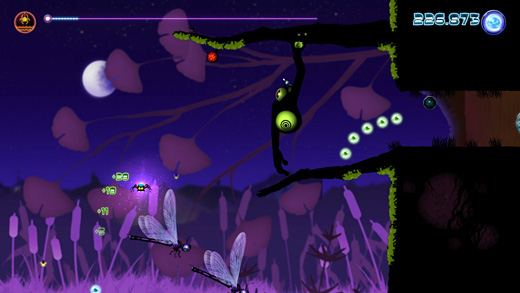 HIGH Achieving the perfect arc to a swing.

LOW Failing (again!) to earn new coins on a level.

WTF Why does the spider fly a UFO in the first place?

The itsy bitsy spider went up the waterspout.

A short time ago in a galaxy far, far away, an extraterrestrial arachnid crash lands on a foreign world. Vowing to find a way to escape the hostile planet and rejoin his sweetheart amongst the stars, the small alien spider sets off on an unfortunately typical adventure.

As a standard platformer, Alien Spidy

asks players to run, jump, and swing through stages populated by environmental obstacles and enemy creatures. The challenge emerges from the use of the right analog stick to fire to grab onto floating objects like flowers or ladybugs in order to swing over brambles and chasms. Sometimes the player needs to maintain speed and momentum to make difficult jumps, and finding the right rhythm requires the player to master aiming, firing webshot, and swinging between safe zones. There is almost a clumsy nirvana to be found here. Almost.

Down came the rain and washed the spider out.

Various enemies, items, hazards, and power-ups populate each stage. The player must avoid rolling weevils, poisonous red mushrooms, spores, and droplets of water. In fact, just about everything in this game will kill the player.

Although Alien Spidy features one hit kills, frequent checkpoints help alleviate the frustration that might develop. Nonetheless, the loose controls combined with touchy hit detection means the slightest grazing of a hazard results in the alien spider zapping out of existence and reappearing again at the last checkpoint. This process thankfully occurs instantaneously, but can still prove tedious.

Large round point bonuses and multipliers also linger around each stage, providing incentive to attempt a particular route or jump. These bonuses seem to decrease as the player gets within a certain vicinity, so getting the highest bonus is a matter of speed and accuracy. Unique powerups include super jump, low gravity, attractor, and super speed, among others, all of which behave in self-evident ways.

With imagery that focuses on the abstract outline of the micro, natural world, Alien Spidy provides adequate (if not slightly uninspired) visuals. The rounded, cartoony art appears handcrafted, perhaps even with love, though at times the game is reminiscent of a flash-based web game. The colors are stark and the architecture simple yet articulate. Backgrounds gyrate and animate along with what feels like the tempo of wind or the generally upbeat music. However, the game lacks an overall distinctive look that distinguishes so much independent development these days.

Alien Spidy does not require the player to finish stages in a linear order, but instead blocks boss battles until players earn enough coins from score benchmarks in each stage of its respective world. There are three worlds in all, each one unlocking after the player defeats the previous world's boss. The game evaluates performance and assigns the player one through five coins, so replaying levels is virtually a necessity. While this extends the replay value of each stage, it also artificially lengthens the game and would have been better as an option, not a requirement.

Out came the sun and dried up all the rain.

more difficult than its cute art style and underdeveloped presentation suggest. While breezing through the first forest-themed world appears simple, earning enough coins to finally go on to the next world proves to be more of a headache than a welcome challenge. The difficulty, along with an unimpressive combination of uninspired aesthetics, unnecessarily long load times, and a generic feel, make the game, as its title suggests, a disappointingly alien experience.

And the itsy bitsy spider respawned despite the pain. Rating: 6.0 out of 10.


Disclosures: This game was obtained via publisher and reviewed on the Xbox 360. Approximately three hours of play was devoted to single-player modes. The game was not completed.

Parents: According to the ESRB, this game contains comic mischief.

Deaf & Hard of Hearing: Sounds and music are not necessary to enjoy this game.